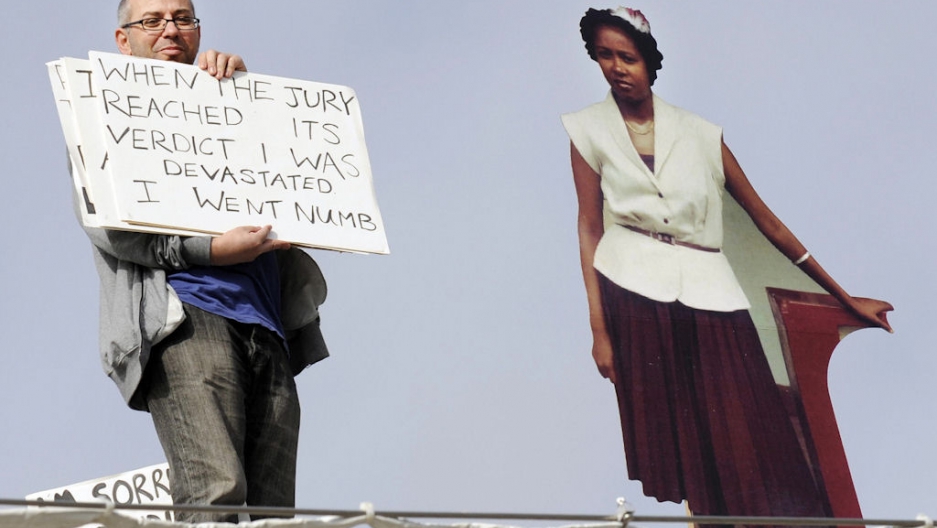 Brian Capaloff (left) holds a placard beside a cardboard cut-out photo of Linda Carty while standing on the fourth plinth in Trafalgar Square in London on Sept. 10, 2009. Capaloff used his one-hour slot on the plinth to highlight Carty's legal case. She is on death row in Texas, after being sentenced to be killed by lethal injection. The fourth plinth project invites members of the public to stand and speak on Trafalgar Square's empty plinth.
Credit: Adrian Dennis
Share

It prides itself on making products that improve peoples’ lives. But one is helping put people to death.

Convicted killer Benny Joe Stevens was executed Tuesday in Mississippi’s Parchman State Penitentiary with a lethal injection of the anesthetic pentobarbital made by Lundbeck.

Denmark, like the rest of the European Union, is officially opposed to the death penalty. Lundbeck spokesman Anders Schroll said the company holds that position in the Danish headquarters as well as in its American office.

“This is a misuse of our product,” Schroll said. “We are in an ethical dilemma where we are opposed to the use of our medication for capital punishment while at the same time we want to make sure that patients who benefit from our medication get access to it.”

Pentobarbital is also used in the treatment of seizures in humans and in anesthesia and euthanasia of animals. Only Lundbeck still manufactures the drug for purchase in the United States. Schroll provided letters from doctors urging the company not to withdraw the 50 million doses of the drug sold each year.

For its part, Schroll said Lundbeck has sent letters to prisons in 11 states in recent months demanding they cease using pentobarbital as part of the lethal injection “cocktail” because “this is just not what we stand for” he said. The Danish foreign ministry has pursued the matter through its contacts. No prison has responded. In fact, more and more states are intending to use the drug, with Virginia, the secondmost-active death-penalty state, announcing a switch just this week, following the lead execution state, Texas, earlier this month.

The mid-sized Danish company is left in this “conundrum,” as Schroll put it, because other businesses have put an end to their products’ use in executions. Sodium thiopental was used as the requisite sedative in the lethal mix by all but one of the 36 death-penalty states until very recently. The only U.S. maker of sodium thiopental, Hospira, started running short in summer 2010 and stopped making it altogether in January when it moved its manufacturing facility to Italy, which forbade using it for executions.

The difficulty in obtaining sodium thiopental led to a mad scramble by institutions to obtain it, an effort that in some cases involved the Food and Drug Administration, which had to bypass certain regulations so it could be imported from Britain, where a company called Dream Pharma operated out of a driving school. The desperation of prison authorities and dodgy practices came to light in documents obtained by the American Civil Liberties Union of Northern California and the London-based human rights group Reprieve.

The British government late last year put an emergency export ban on sodium thiopental, after being sued by Reprieve. The U.S. Drug Enforcement Agency has now seized stockpiles of sodium thiopental due to concerns raised about the legality of its import.

But there are also concerns about whether the drug made by Dream Pharma actually worked. The mother of executed Georgia inmate Brandon Rhode came to Europe recently to share the story of what she believes was the agonizing death of her son last year due to defective sodium thiopental. A lethal-injection expert said Brandon’s eyes remained open during his execution, indicating the sedative didn’t work properly. Patches Rhode pleaded with the British government to extend the emergency ban on the drug, saying U.S. authorities had “not only killed Brandon but tortured him … . I beg [you] to keep this torture from happening to anyone else.”

Last month Britain added pentobarbital along with two other lethal-injection drugs to the emergency export ban.

“We oppose the death penalty in all circumstances,” said U.K. Business Secretary Vince Cable, “and are clear that British drugs should not be used to carry out lethal injections.”

Patches Rhode is gratified. Speaking from her home in Mississippi this week, she said, “There’s just no words than can get across how it feels. The fact that Europeans are going to work harder to help people in prison in the U.S. than the people in the U.S. are is just” ― she paused cautiously ― “it’s shameful for the Americans … but it’s great. It really is.”

The British ban leaves Lundbeck as the sole supplier of the new lethal-injection barbiturate. Schroll says the company has done all it can to find a way to limit who can buy pentobarbital and for what purpose.

“That is not an option,” he concluded, “because wholesalers have no ability to control the end use.”

Reprieve’s Maya Foa contends that if Lundbeck really wanted to remove itself from the death-penalty business, it could. Manufacturers find ways to do this all the time, she said.

“This doesn’t need to be done through end-user contracts,” Foa explained. “The obvious solution is that they use specialty pharmacies, which are precisely for distributing products that need to be restricted or which they want to monitor.”

Schroll says Lundbeck has looked at that possibility and concluded it still wouldn’t be effective.

“Licensed healthcare providers in the U.S. can use approved drugs in any way they deem appropriate,” he said. He also hoped that “[Non-governmental organizations] would realize that pressure on us will not stop the misuse of the product or stop capital punishment and executions. The only effective way to stop this would be when states stop the death penalty.”

Foa still believes the company can and should do more to “not be complicit.” And she’s actively working on coming up with a number of strategies by which Lundbeck and other pharmaceutical companies can, in her view, “make an active moral choice … or an economic choice, but then they must let it be known it’s an economic choice.”

But will limiting the availability of drugs used in executions achieve her ― and the EU’s ― ultimate goal of ending capital punishment in America?

“It may not be that the person who sits on death row in Texas right now is going to be saved,” said Foa, but by making the process more difficult for U.S. states to carry out, and by “putting this back into the public consciousness,” she’s convinced “people have to question it.”

Editor's note: This story was updated to correct the spelling of a name.