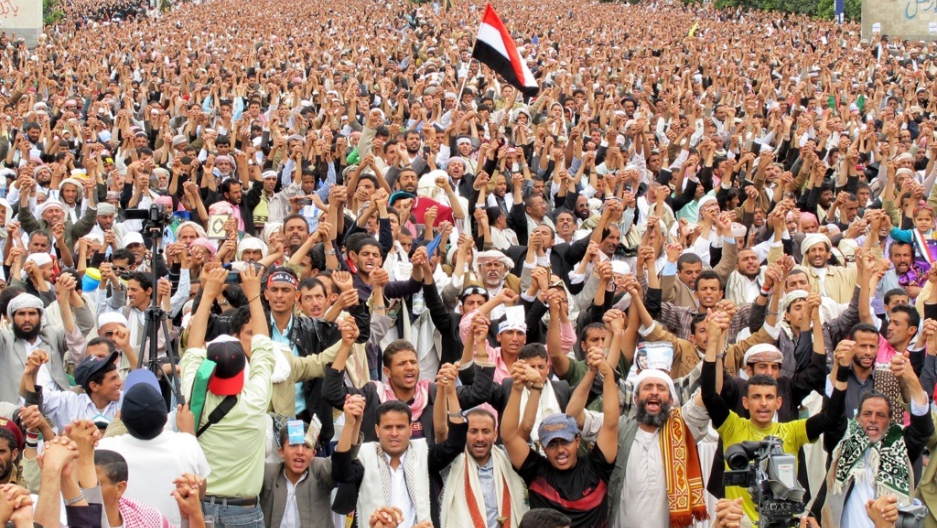 Tens of thousands of Yemeni anti-government protesters shout slogans during a demonstration calling for the ouster of President Ali Abdullah Saleh in Sanaa on May 6, 2011.
Credit: Gamal Noman
Share

SANAA, Yemen — From the first protests that rippled across the Arab world after a marginalized young Tunisian famously set himself on fire in December, to the confrontation in Tahrir Square in Egypt’s capital, Arab youths have provided the animus for revolt.

Yemen, the youngest nation in the Arab world, has been no exception. Half of the country’s population is under the age of 15 and unemployment among young people here runs as high as 40 percent.

The Arabic word shabab or “youth,” has now become almost synonymous with the country’s revolt. Of the 162 demonstrators killed since the protests began three months ago, the vast majority have been young men in their early 20s, some in their teens.

Yemeni President Ali Abdullah Saleh has repeatedly insulted them, calling them “drug dealers” and “outlaws.” Foreign ambassadors have attempted to derail them, criticizing what they perceived as a lack of focus. And even the political opposition, which is supposed to be supporting them, is threatening to drown them out.

Worst of all, they are being violently attacked by government forces on a regular basis. The latest bout of violence on Wednesday involved a four-hour shoot-out between rival forces of Yemen’s military in the heart of the capital. Ten protesters were killed in the skirmish, including one woman, and hundreds suffered from bullet wounds.

Yemen’s revolution has been a slow-burning one. Unlike their counterparts in Egypt, where a 16-day whirlwind tossed Hosni Mubarak from office, Yemen’s protesters are now three months into their own uprising. They are battling a ruler who, despite being abandoned by members of his own party, military and tribe, continues, somehow, to cling to power.

“There’s only one good thing about [Saleh] taking so long to leave, we’ve had more time to organize ourselves, we now know what we want,” said Rafat Al-Akhali, a 22-year-old business student who has emerged as a leader of the youth movement.

Al-Akhali is not your typical Yemeni. With slicked-back hair, skinny jeans and an iPhone in hand, he might look more at home at a Starbucks in New York City than wandering the dusty streets of this ancient capital.

Yemen, while renowned for its Islamic customs and ancient traditions, is also a place full of misnomers and surprises. Rafat is one of them. Behind his chic attire and soft Canadian accent, lies a courageous protest leader, a young man who, like many others in his country, has now devoted his life to the removal of Saleh, a man who has ruled Yemen, often brutally, for more than three decades.

Rafat is the founder of the Civic Coalition of Revolutionary Youth, or CCRY, an organization born on Facebook that was set up in late March by a handful of student activists to help unite Yemen’s anti-government demonstrators. It has swelled to encompass one of the largest, loudest and best-organized protest groups in the country.

In addition to running its Facebook group, which has more than 6,000 followers, CCRY coordinates marches on the president’s palace, posts “revolutionary updates” on Youtube and Twitter and publishes a weekly newspaper.

Although it’s a youth-led endeavor — the leaders are all in their late teens or early 20s — CCRY draws support from a broad range of Yemenis, including defected lawmakers, civil rights activists, academics, lawyers and businessmen.

Their success has largely hinged on their ability to coordinate a jumbled assortment of disparate groups — rural tribesmen, bearded clerics, socialists, dissatisfied shop-owners and rowdy school children. In the early days of the uprising, these groups rallied together, marching and camping out in the streets. But a common enemy is all they had.

“At first every tent became a movement,” Rafat recalled, sitting in a nearby coffee shop uploading photos and videos of Wednesday’s bloody assault onto Facebook. “There were some 465 separate groups all proclaiming themselves to be leaders of the revolution. But most of them only had about five members. It was chaos.”

It did not take long for it to dawn on youth leaders like Rafat that their confused revelry, while full of determination and spontaneity, was not going to be enough to oust the president, a stout and wily man who, after decades of ruling this fractious country, has become a master of brinkmanship.

“We were marching and being shot at every day but with no voice, no leader, and no clear aims … we were being trampled on and even worse, ignored. We knew we had to get our act together,” he said.

Rafat’s trick was to persuade all the different groups to gather under one roof. Instead of seeking to lead, he set about forging alliances, persuading them that all their voices would be heard. Each group that wanted to join, he decided, had to elect a representative.

“We soon discovered that most of the groups, whether they were tribesmen or teenagers, had things in common and similar aims. We’ve built a system of representation so that everyone has a voice,” he said.

The system reflects the kind of democratic government the protesters hope will arise when — or if — Saleh leave office.

“Our membership is the voice of a diverse group of activists, local influencers, professional associations, civil organizations and tribal groups,” said Husam Al-Sharjabi, CCRY’s chairman. “These groups have each expressed their aspirations, in one way or another, for freedom, democracy and justice in Yemen. They reject tyranny and the monopolization of power and wealth.”

The movement has at times faced stiff opposition not only from the president but also from within. The country’s political opposition — a motley collection of Islamists, socialists and Arab nationalists, which most Yemenis view as being as corrupt and inept as the president — has been locked in negotiations with Saleh for about two months, a process that has alienated many of the protesters on the streets.

The relationship between the protest leaders and the political opposition, in fact, has at times grown tense, verging on hostile.

Rafat said the opposition, known as the Joint Meetings Parties, or JMP, is slowly dousing the flames of their revolt by pursuing tit-for-tat negotiations with the president that run contrary to many of the protesters demands.

In the current deal being discussed by Saleh and the opposition, which was penned by Saudi Arabia and other neighboring Gulf countries, Saleh and his family would be given immunity if he stepped down — a concession that has angered Yemen’s young people.

“Despite all the efforts, lives and injuries paid for the sake of freedom, the youth still feel they are being manipulated by a politicized game. Our peaceful revolution is by the people and the gains expected are to the people ... We wonder why is this revolution being treated as a political conflict?” asked Faizah Sulimani, one of a handful of female spokespersons for CCRY.

This conflict between the JMP and the young protest leaders played out on the stage being used to give speeches outside Sanaa University, an area now known as “Change Square.” The stage, a huge wooden structure at the heart of the protest encampment is hooked up to speakers, which stretch for miles through the tent-filled streets surrounding the university.

It was Islah, the local political arm of the Muslim Brotherhood, which first built the stage and that, for a time, held a tight grip over its management, deciding who and what could be said to the tens of thousands of demonstrators.

Feeling sidelined, Rafat and a group of fellow protesters decided to construct an alternative stage for the young people. But within minutes of it being assembled it was torn down by a team of middle-aged men wielding crowbars.

They were told they were “weakening the spirit of the revolution,” Rafat said.

While the political parties are still managing the stage, they have since reached an understanding that makes it more open — more democratic. Each party now gets a revolving four-hour slot in which they can say and do as they please.

“When the socialists are on stage you find poetry and women playing guitar. When the Islah are on it’s a bit more solemn ­— fiery speeches and lots of prayers,” Rafat said, laughing.

Perhaps the greatest hurdle facing Rafat and his revolutionary council has been reaching a consensus on the specific aims of the revolution, a necessary step, he said, if they are ever to be taken seriously by Yemen’s political elite or the international community.

“We had to address the million dollar question,” Rafat said, “what happens after Saleh goes?”

At first their attempts to form an official charter led nowhere.

“There were so many of us that by the time we’d all introduced ourselves two hours had passed,” he said.

But weeks of persistence have finally born fruit. Last week the Revolutionary Council drafted a transitional plan mapping out a political future for Yemen once Saleh goes.

The Coalition’s charter lists one of its main objectives as the creation of a modern democratic nation for all Yemenis to enjoy equally under the rule of law.

Other demands include the immediate dismantling of the political and security apparatus, the arrest and trial of all those involved in committing criminal acts against citizens and/or against the public’s interest through fraud and corruption, a constitution that transforms the governance system from presidential to parliamentarian and a decentralized government that ensures the unity of the country while protecting the unique interests of different regions.

“Despite what others are saying, we [the youth] are deeply aware of the challenges we will have to face following Saleh’s departure,” said Rafat, slamming closed the lid of his laptop and heading back to Change Square.