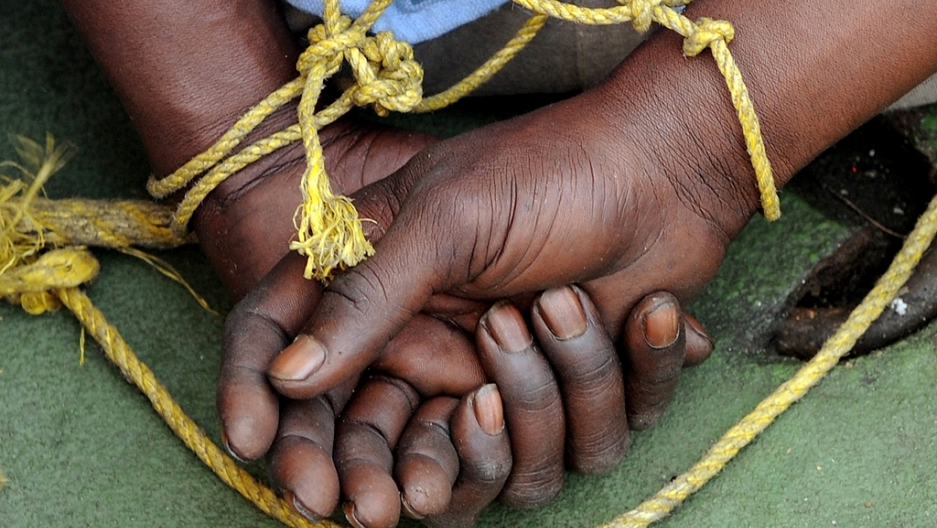 A suspected Somali pirate's hands are tied behind his back during a media interaction on board an Indian Coast guard ship off the coast of Mumbai on Feb. 10, 2011.
Credit: Punit Paranjpe
Share

MUMBAI, India — Over the past few years, Somali pirates have posed a bigger and bigger challenge to India, disrupting its trade, capturing its merchants, attacking closer to its shores and — like a game of Calvinball — changing the unwritten rules as they go.

But India will not give up.

Faced with a growing threat from these men in boats, India is stepping up its fight with a variety of measures aimed at ending the menace. The efforts, say maritime security experts, also provide India an opportunity to flex its muscles on the world stage and show that it is willing and able to be a strong regional and global power.

“It’s a very big priority for us,” said P.K. Ghosh, a senior fellow at Observer Research Foundation with an expertise in maritime security. “The Indian government is taking [piracy] very seriously.”

Worldwide, pirates are posing a bigger problem to trade and security. In the first three months of 2011, there were 142 attacks around the world, up from 67 a year earlier, according to the International Maritime Bureau, a nonprofit that counters maritime crime.

India’s trade is dependent on use of the sea, and Somali pirates pose a threat to the country’s booming economy. Annual Indian imports through the Gulf of Aden, which lies between Yemen and Somalia in the Arabian Sea, are valued at $50 billion, and exports are at $60 billion, states a report in the Diplomat.

In addition to the 24 Indian merchant ships that travel through the Gulf of Aden a month, the pirates pose a challenge to India’s approximately 100,000 merchant mariners who serve as the crews on foreign ships. Pirates currently hold 46 Indians from various ships hostage.

But freeing those Indian hostages has not been easy, especially given that the pirates recently changed their tactics after a negotiation.

The pirates typically capture a ship, take its crew and the ship hostage and then demand a ransom. But after a recent negotiation, in which pirates were reportedly given $3.5 million for the entire crew of 15, the pirates reneged on the negotiations and refused to release seven of the mariners until India releases the 120 pirates it has captured.

India began beefing up its anti-piracy efforts in 2008 and has since had a warship deployed in the Gulf of Aden to protect its ships there as well as foreign ones. The Indian navy has also deployed ships and aircraft for anti-piracy patrol off the Maldives, Seychelles and Mauritius.

The Indian government has now decided to deploy more naval ships and has formed an Inter-Ministerial Group to negotiate with hijackers and coordinate with vessel owners and other countries. The group will work on freeing captive Indians and enhancing maritime security, according to local media reports.

India is also in the process of drafting a law that will improve authorities’ ability to prosecute captured pirates. India has not had a modern and effective law by which to prosecute the 120 pirates it is holding.

However, despite India’s efforts, the threat from these men in boats continues, largely because of the complex legal issues and the difficulty maritime forces have in patrolling a larger and larger segment of the sea, according to SS Parmar, a research fellow at the Institute for Defence Studies and Analyses in Delhi.

“They are so less,” he said, referring to the naval ships, “and the area to cover is so vast.”

Maritime experts say there needs to be better coordination between countries and better investigation into who sponsors the pirates and where the ransom money goes.

Furthermore, specialists like Parmar argue that efforts to combat piracy will only be effective in the longterm once India and the international community address the root of the problem, which lies in Somalia being a failed state that does not provide sufficient education, jobs and opportunities to its people.

Piracy provides a lucrative opportunity in a land with few good options. A Somali pirate can earn $20,000 to $30,000 a year in a country where the average yearly income is $600, according to a report by Ghosh.

In addition to using its naval power to protect merchant vessels, some say that India is also using the issue of piracy as an arena in which to display its growing might.

Whenever a country sends out ships, said Ghosh, it sends a dual message: one message is aimed at addressing the issue at hand, and the other is aimed at alerting nations about its capabilities.

“Any exercise and deployment of warships is an exercise of your capacity,” he said.