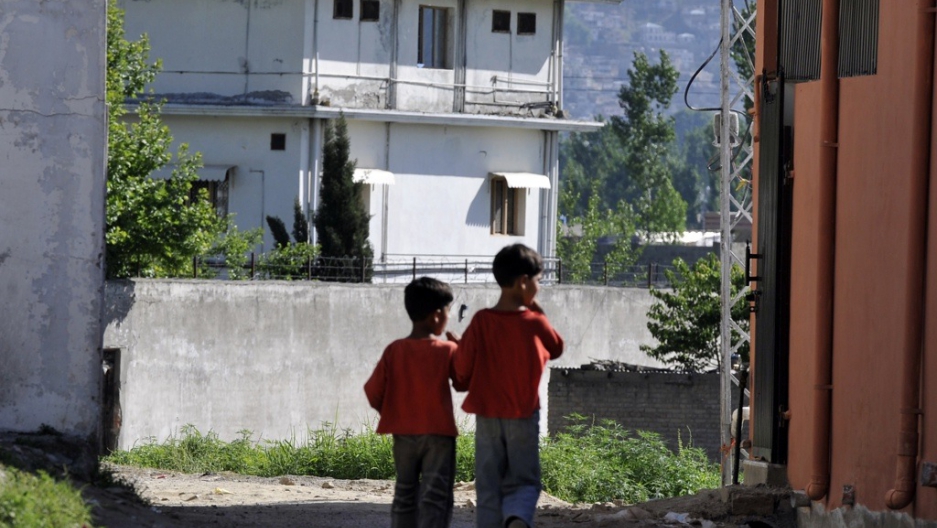 Pakistani boys walk toward Osama Bin Laden's final hideout as military and police keep the area cordoned off in the Bilal Town neighborhood of Abbottabad on May 8, 2011.
Credit: Aamir Qureshi
Share

ABBOTTABAD, Pakistan — It was 11:40 p.m. on May 1 when two plain-clothed security personnel knocked on the door of Niaz Ali, who lives just 100 meters from the compound where Osama bin Laden, the most-wanted man on the planet, was hiding.

The two men asked Ali to turn off the lights inside and outside his house and to stay indoors until further notice.

Ali obliged, not bothering to ask their identity. He said it was obvious that they were either Pakistani intelligence or military officers, recognizable by their short haircuts, strong build and fluent Pashtu.

About two hours later, bin Laden would be dead, killed by a team of U.S. Navy SEALs.

A half a dozen people who had been living in houses next door to the Al Qaeda leader said they had similar experiences in the hours before U.S. helicopters descended on the compound, suggesting there had been some sort of security-related activity on behalf of the Pakistanis before the U.S. helicopters entered Pakistan’s air space.

These local reports support the claims made by several senior Pakistani military and intelligence officials who told GlobalPost on the condition that their names not be used that, in fact, there were elements of both the intelligence community and the army that knew of the raid beforehand and that there was more cooperation between the two countries than officials are publicly admitting.

These reports contradict the official line from both the U.S. and Pakistani governments that neither Pakistani intelligence nor the army had any prior knowledge of the operation before it began.

Despite the reports from the residents, U.S. intelligence officials stand by their prior statements that Pakistan had no prior knowledge of the U.S. raid on bin Laden’s compound.

Pakistani political analysts said that Islamabad is likely downplaying its role in the operation to protect itself from a potential backlash from its citizens, who have grown impatient with CIA activity throughout the country, including the ongoing U.S. drone attacks in North Waziristan that have killed, by many accounts, hundreds of civilians.

Residents of Bilal Town, a newly developed, upscale neighborhood in the suburbs of Abbotabad — just 800 meters from Pakistan’s premier army training academy — also said they had noticed security personnel, dressed in the loose shirts and trousers associated with paramilitary troops, in the streets near bin Laden’s compound at least two hours before the beginning of the operation.

The residents, who said the presence of security personnel in residential neighborhoods was rare, said they appeared to be guarding streets leading to and from bin Laden’s compound.

Worried about retribution from Pakistani security agents, residents said they have mostly avoided speaking to the media. Three different residents said who they assumed were intelligence officers warned them not to talk to journalists about what they saw on the day bin Laden was killed. They specifically warned the residents not to speak to the foreign press.

Residents said they believed it was impossible for Pakistani authorities to not know about the raid, especially given the number of military institutions present in the area. In addition to the prestigious Pakistan Military Academy, there are two military training centers — one belonging to the Baloch regiment and another to the Frontier Force, two of the most-elite regiments in the Pakistan army. There is also the local headquarters of the Inter-Service Intelligences, known as ISI, which is focused on foreign intelligence gathering and operations; another office housing the Intelligence Bureau, which runs domestic intelligence programs; and the Army Medical Corps.

All of these institutions are located less than a mile from where bin Laden was living.

Also based in the area is a Quick Response Force, an army unit created to respond to potential terrorist attacks that might target the highly-sensitive area.

“I cannot believe that the Pakistani government and army were not aware of this operation. The whole town was awake. We were calling each other. Even I received calls from Havelian,” Ali, one of the residents, said, referring to a town about 10 miles south of Abbottabad. “How can I believe that the Pakistan army and its Quick Response Force was asleep?”

Ali said he first heard the sound of a helicopter at about 12:15 a.m. He said it was hovering over the area until, about five to 10 minutes later, it landed on the grounds of the Frontier Force training center. He did not know whether it was a U.S. or Pakistani helicopter.

The Frontier Force is one of Pakistan’s most-respected army regiments and has served in numerous missions abroad. The Frontier Force participated alongside the Americans in the Battle for Mogadishu in 1992. And, according to former Pakistani President Pervez Musharraf, the Frontier Force led the operation to rescue U.S. Rangers trapped in Mogadishu in 1993 after their Black Hawk helicopter crashed, an event made famous by the book and subsequent film, "Black Hawk Down" — although the book and film omitted Pakistan’s role.

The Frontier Force also deployed more than 5,000 troops as part of the multinational coalition that participated in the first Gulf War in Iraq in 1991.

“After a few minutes, I heard the sound of another helicopter. It was unusually loud,” Ali said. The deafening noise woke up the entire town, he said, adding that it was rare to hear helicopters flying in the area at night.

“It was only the second time in my life that I saw any helicopter flying here at night,” he said. “We thought that the Pakistan army was conducting some operation in the area.”

A local journalist, who asked not to be named, told GlobalPost that he had witnessed unusual movement of security personnel on the main road leading to the military academy and Bilal Town just before sunset, well before the operation began.

“I thought there might be some ceremony … and that movement was in connection with security arrangements,” he said. “But now, when I relate the two events, I believe it was part of the [bin Laden] operation.”

Another local journalist said that he was in Havelian, about 10 miles away, when one of his colleagues called him at about 1 a.m. to say he had heard helicopters, an explosion and firing.

“I kept trying to get hold of senior law enforcment officials. But to my surprise — many of them know me very well — they either didn’t pick the phone or their phones were switched off at a time when the whole town was rattled by explosions,” he said.

A senior police official, also speaking on condition of anonymity, told GlobalPost that when his patrol reached the area and heard the gunfire and explosions, he contacted his commander to find out how he should respond.

“I was told ‘don’t worry, everything is under control, no need to go there,’” the officer said.

Zahir Shah, a local businessman and a resident of Thanda Chuwa, another neighborhood close to bin Laden’s compound, said that although no security official came to his house before or after the operation, he had noticed movement of security personnel around the area.

“I could easily see that they were locals, not foreigners,” Zahir said.

The former director of Pakistan’s intelligence agency said he wasn’t buying the Pakistani government’s story either.

Lt. Gen. Asad Durrani, who served as ISI chief in the early 1990s, told the BBC in an interview that he thought Pakistan’s intelligence community most likely knew about the raid on the bin Laden compound beforehand.

“It is possible that they did not know, but it is more likely that they did know,” he said, referring to ISI. “They had some idea about the presence and of course as far as the operation itself is concerned it is not conceivable that it was done without the involvement of Pakistani security forces at some stage — maybe late enough — but the indications are that they were involved and they were told they were in position. The army chief was in his office, the cordons were turned around that particular place — police as well as the military.”

A senior Pakistani intelligence official confirmed for GlobalPost that at the time of the U.S. operation against bin Laden, which began around midnight, Gen. Ashfaq Pervez Kayani, the most-senior military official in Pakistan, was at the army headquarters in Rawalpindi and was being given minute-by-minute reports about what was happening.

He refuted the claims made by some government and army officials that although the army chief was at the headquarters at that time, he was not aware of the operation.

“Then what was he doing at [the headquarters] at 1 a.m.?” the intelligence official asked.