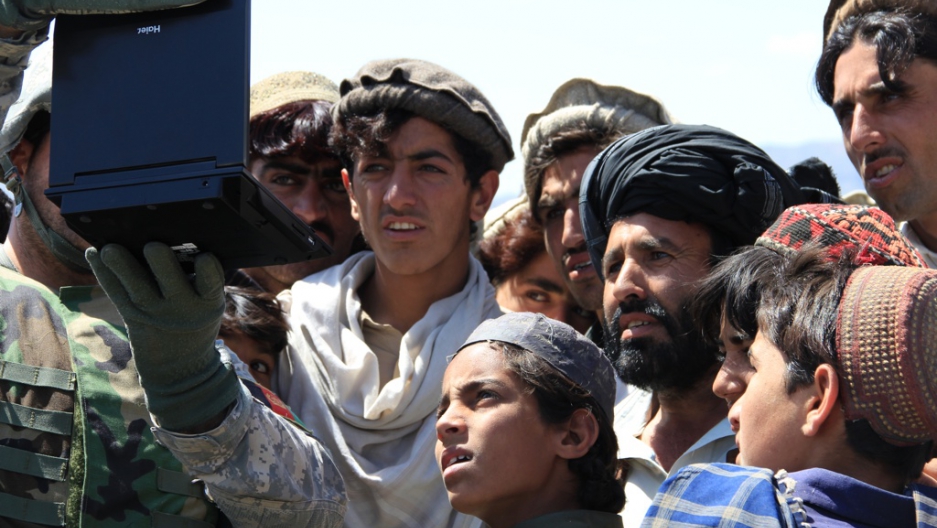 Afghan villagers watch a U.S. propaganda film on a portable DVD player that attempts to explain why the U.S. military is in Afghanistan.
Credit: Maura R. O'Connor
Share

FORWARD OPERATING BASE SALERNO, Afghanistan — In the bottom of a dry, ancient riverbed near a small village in Khost province, a local employee of the U.S. Army presents a battery-powered, handheld DVD player to a crowd of boys and men.

They gather around the small screen to watch a movie called “Why We Are Here.”

Produced by the U.S. Military Information Support Operations (MISO), traditionally referred to as “PSY-OPS,” the movie describes the events of 9/11, when an “Arabian group called Al Qaeda,” says the narrator in Pashto, flew planes into two “very tall buildings where thousands of people, including Muslims, worked.”

Sadly, “Al Qaeda launched these attacks from Afghanistan, where the Taliban supported them.”

The film explains that the United States entered Afghanistan to aid the Afghan people in defeating Al Qaeda and its supporters through training the national army and police, and helping the economy so that “people are able to stand on their own feet and believe in themselves.”

At the end of the film, the audience is told they have an opportunity to make the right decision for their family and country by supporting the government of the Islamic Republic of Afghanistan.

“The Taliban claims to be true Muslims, but do true Muslims kill innocent people?” the film asks.

Afterward, Sar Fraz, a village elder, was given the DVD player and a handful of other films produced by MISO, some of them showing Taliban bombings and civilian deaths.

“I’m going to show the movies to the village,” Fraz said as he held the films.

The opportunity to watch movies is rare for the 300 people who live there because, as Fraz explained, there is no electricity for televisions. When asked what he thought about the message of the film, Fraz said, “I know the Taliban does bad things. But I can’t talk about it here,” indicating he couldn’t speak freely in front of the crowd of men surrounding him.

In recent months, about 1,200 handheld DVD players have been handed out in Afghan villages and urban areas around eastern Afghanistan, along with movies such as “Why We Are Here.”

According to military officials, the campaign, called “Roll the Tape,” was launched in late 2010 because Afghanistan’s high illiteracy rate made pamphlets and posters an ineffective method of delivering information, and polling conducted in Afghan villages indicated some of them didn’t know about 9/11.

“Most of the people in our area are Pashtun,” said Maj. Steve Smith who works in psychological operations for Task Force Duke in Khost province. “In Pashtun [moral] code, justice is one of the strong words, and revenge.”

After watching the movie, Afghans “relate to the fact that we’re here because Americans were killed on that day and the training was conducted here and a lot of fighters were here,” Smith said.

But with the killing of Osama bin Laden, Al Qaeda's leader, are the films already dated? Does the explanation for “Why We Are Here” still hold?

On Saturday, U.S. Defense Secretary Robert Gates described bin Laden’s death as a potential game changer, though he said that it could be six more months before the true effect of bin Laden’s killing on the war in Afghanistan can be surmised. U.S. President Barack Obama described the event as “making progress” in the goal of dismantling Al Qaeda.

“We have cut off their head, and we will ultimately defeat them,” he told soldiers at Fort Campbell, Ky., on Friday.

The president restated his intentions to begin scaling back the number of soldiers in the country in July, and to pass security operations over to Afghans. But in the last week, pundits, politicians and policy experts have debated the plan from all sides, with some arguing for a faster scaling down of U.S. troops than is planned, and others stating their case for more troops.

Thus far, the death of bin Laden appears to have only highlighted how the Afghanistan War has evolved over a decade, from a simple hunt for Al Qaeda militants to a complex counterinsurgency and government capacity-building effort.

But military officials said they don’t anticipate a change in the fundamental message of the Roll the Tape campaign and films like “Why We Are Here.” Plans are now underway to give every company within Task Force Duke a movie projector and speakers in the coming months in order to conduct public viewings of the movies.

Local media institutions and universities are also being approached with micro-grants, so Afghans can begin producing their own movies for the campaign that will cover development projects in the area, as well as profile government officials and events.

“We’re not going to tell them what to produce,” Smith said. “We want them to develop it so it’s an Afghan product and it has more legitimacy.”

Some military commanders are using the magnetism and novelty of the Roll the Tape movie screenings as an opportunity to inflate the biometrics databases of local Afghans.

Since it was launched in 2009, the biometrics program has registered a few hundred thousand Afghans and there has been an even greater push in recent months to increase the database because, U.S. officials say, it is an effective counterinsurgency tool.

“We show the videos and then we use that as an opportunity to enroll folks in biometrics, sort of the price of admission to the movie,” said Lt. Col. Jesse Pearson, battalion commander of the 1-26 Infantry with Task Force Duke. “It’s a way of making sure that we know who we are talking to, we know who are insurgents and who are not because they are indistinguishable.”

Unlike some other military units, Pearson said he makes sure his troops don’t give the DVD players away because of their high value as means of disseminating propaganda — both for military or the Taliban.