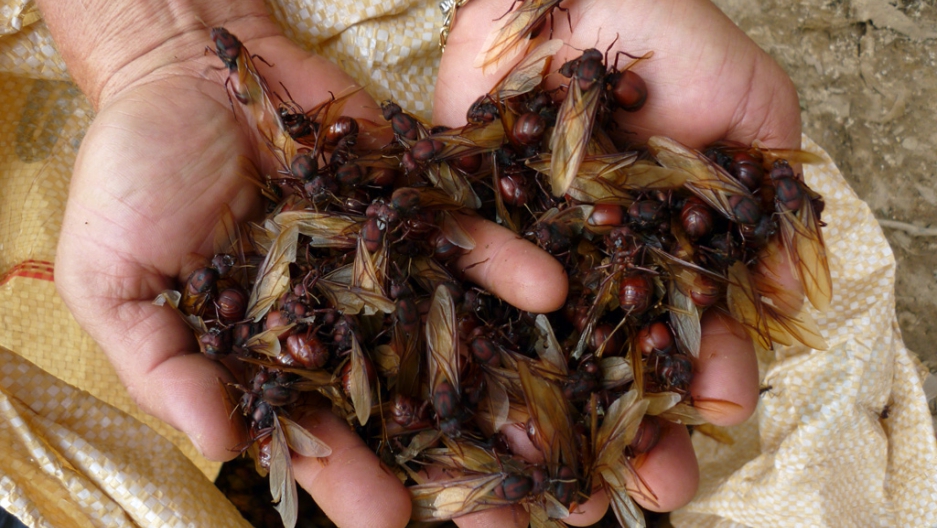 OIBA, Colombia — Emerging from the soil this time of year is something Colombian farmers covet more than anything they can grow: big-butt ants.

Known in Spanish as "hormigas culonas," the brown, cockroach-size insects are roasted, salted and eaten like peanuts. Considered a delicacy, they can fetch more than 10 times the price per pound of Colombia’s world-famous coffee.

In northern Santander department, about the only place in Colombia where they flourish, the ants are sometimes used as pizza topping. One enthusiastic chef serves beef tenderloin and pork cutlets drizzled in ant sauce.

The notion of eating ants may trigger the gag reflex so first-timers are advised to instead focus on their earthy, nutty taste and day-old-popcorn texture.

“The more you eat, the more you want to eat,” said farmer Miguel Angel Paez, 25, who has been gathering ants since he was a boy. “The butt is the best part.”

Colombians aren’t the only bug eaters. In several Latin American and Asian nations, people toss back crickets, grasshoppers and palm weevils which are rich in protein and vitamins. In fact, the United Nations plans to hold a conference next year to promote the gathering and harvesting of edible insects as a more environmentally sound alternative to raising livestock.

Colombia’s big-butt ants are a species of winged leaf-cutter ants and are divided into castes. In March, April and May, when seasonal rains soften up the ground, the princes and princesses in the colony crawl out of the ground and fly toward the sun to mate. The coming out of the ants each spring “is actually a love story,” said Mario Ribero, a filmmaker who grew up in Santander.

Indigenous groups in and around Santander have been eating ants for centuries. They passed on the tradition to Spanish conquistadors and the habit stuck.

“A lot of people think it’s gross but in Santander eating ants is something you learn as a child,” said Jorge Diaz, who owns Color de Hormiga, a restaurant in the town of Barichara that specializes in ant-based dishes. “It’s our version of caviar.”

Strange as it sounds, caviar is an apt comparison. That’s because the princess ants are bloated with eggs — hence the big-butt nickname — and are the ones people try to snatch, roast and eat.

“It’s like dancing,” Diaz said of the annual ant-catching ritual. “You have to be moving really fast all the time."

Still, it’s worth the effort.

“You can earn a day’s wage by selling a few pounds of ants,” said Edgar Vargas, 27, as he and his friends worked their way through a case of beer purchased with the proceeds from ants they’d gathered that morning near the town of Oiba.

One of their regular buyers is Carlos Valluna, who plies the back roads of Santander in a beat-up Nissan with the windows rolled down shouting “Hormigas! Hormigas!” to catch the attention of ant hunters. A savvy dealer, Valluna can determine how much a bag of ants weighs just by picking it up. He’s also stubborn.

In Oiba, Valluna haggled with a drunken farmer about whether he had collected two or two-and-a-half pounds of ants. To settle the matter, the men marched into a general store where — this being Santander during ant season — the manager thought nothing of turning over his scales to weigh a swarming mass of live insects.

The ants must be either frozen or kept alive until the moment they are roasted; otherwise they can taste bitter. After purchasing several pounds of ants that appeared to be flagging, Valluna transferred them to a bag with tiny holes and placed it on the roof of his car to provide them with a blast of fresh air on the drive home.

Once in his back yard, Valluna dumped the live ants into an aluminum pan atop a gas burner and stirred them with a wooden spoon. As they crackled, the smell of roasted ants wafted through the barrio and several neighbors stopped by for free samples.

Next, Valluna winnowed the ants by tossing them in the air so the wind could blow away the detached wings and legs which are considered chaff. Then, he seared the cooked insects with salt water, dumped them on a towel to cool and packed them in plastic boxes for delivery to stores.

In the off-season when there are shortages, aficionados like Diaz, the restaurant owner and chef, will pay up to $40 for a pound of the insects.

Diaz’s specialty is filet mignon topped with a reduction made of ants that have been liquefied in a blender then strained and combined with beef stock and herbs. The popular dish helped Color de Hormiga (which means “the Color of Ants”) earn a spot among the top-10 Colombian restaurants in the Lonely Planet travel guide.

Though Diaz has never cooked with any other bugs besides ants, he finds the notion intriguing. “Once you start eating insects,” he said, “it’s a whole new world to explore.”