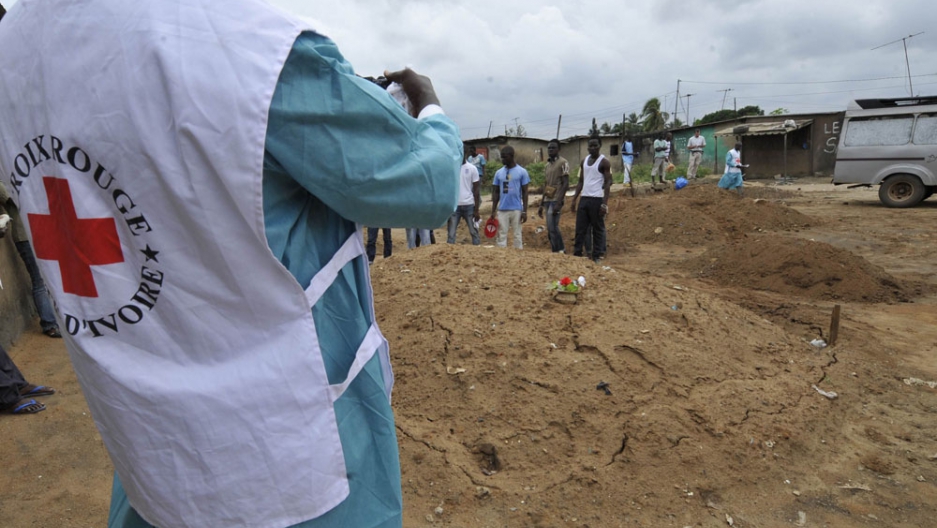 At a site in the Yopougon district of Abidjan a Red Cross worker stands by a suspected mass grave.
Credit: Sia Kambou
Share

A football field in the city of Abidjan was turned was used as a mass grave to bury dozens of bodies.

UN investigators were dispatched to the site during the weekend, their suspicions of yet more massacres overshadowing the swearing-in of Alassane Ouattara as president.

Ouattara’s battle for power against Laurent Gbagbo plunged the West African state into civil war after Gbagbo lost elections in November but refused to step down.

The latest massacre site was found in the Yopougon district of Abidjan, a Gbagbo stronghold during the worst of the fighting earlier this year and a hold-out for some of the ex-president’s loyalists since his capture and arrest last month.

A UN spokesman in Ivory Coast said the football pitch in Yopougon, “is now an open-air cemetery”.

In an interview with the BBC the head of the UN’s human rights office in Ivory Coast, Guillaume Ngefa, said his team had found two separate mass graves in Yopougon containing at least 50 bodies.

Ngefa said the massacre of mostly young men was perpetrated the day after Gbagbo’s arrest, which suggests responsibility for the killings may lie with pro-Gbagbo militias.

Earlier this year evidence emerged of a separate massacre in the town of Duekoue where hundreds were killed after pro-Ouattara forces swept through the town.

As Ivory Coast seeks truth and justice after months of fighting it seems increasingly clear that no one’s hands are clean.