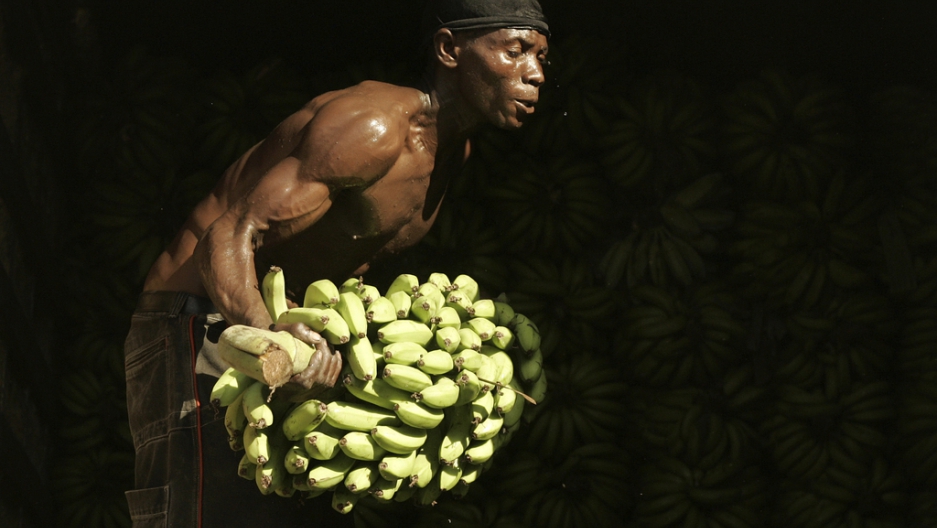 A Haitian worker carries bananas at the frontier line between Malpase in Haiti and Jimani in Dominican Republic, April 10, 2007.
Credit: Eduardo Munoz
Share

LA ROMANA, Dominican Republic — Carmen Augustine de Santana and Juan Jose Santana were born and raised not far from each other in this Dominican city.

Teenage sweethearts, they married and started a family. Juan gained prominence as a doctor, a local political leader and director of the city’s public hospital. Carmen raised their four children and traveled regularly to the United States to visit family members.

“We’ve spent all our life here. We still live in the same city where we were born,” she said.

Yet, in the eyes of the Dominican government, she is not Dominican and has never been.

Thousands — and potentially hundreds of thousands — of people like her who were born on Dominican soil to illegal immigrants are being told that they aren't citizens. Since they've lived in the Dominican Republic their whole lives, most aren't recognized as citizens of any other country either.

On the day she spoke to GlobalPost recently, Augustine for the third time applied for a certified copy of her birth certificate, which she needed to renew her passport. They told her that her mother was an illegal Haitian immigrant and, therefore, she did not qualify for Dominican citizenship, she said.

“The first time we went, it was a shock. We have never even been to Haiti. But they say that she’s not Dominican because her mother was Haitian?” her husband said. “At this point, I’m indignant. I’ve spent my entire career working for this government and I’m ashamed of it now. I’m ashamed of the … xenophobia.”

In 2004, the Dominican government adopted immigration laws that denied birthright citizenship to the children of people “in transit” at the time of the birth. Dominican authorities applied “in transit” to illegal immigrants, largely Haitians. After legal challenges in domestic and international courts, the government last year adopted a new constitution that clarified that people born to foreigners in the country illegally would not receive citizenship.

Now, the government is retroactively applying those laws to the children of Haitians who crossed the porous border decades ago to work. As a result, thousands have been denied documents by the government, including copies of birth certificates and national identity cards. Those documents are necessary to do everything from marry to attend college to travel.

Human rights groups say that an inordinate number of cases are the children of Haitians. The International Organization of Migration estimates as many as 1.2 million Haitians live in the country. The government’s own estimates vary widely. The U.S. State Department said this year in its annual human rights report that “hundreds of thousands of Dominican-born persons of Haitian descent were functionally stateless.”

For some, it’s a new twist to the long-troubled Haitian-Dominican relations. Although they share Hispaniola, an island that’s slightly smaller than the state of South Carolina, the two countries are vastly different economically and culturally.

Those differences infamously led former Dominican dictator Rafael Trujillo to order a massacre of Haitians living near the border in 1937. Historic tensions have flared recently as the Dominican government clamped down on the border and began mass deportations in the name of preventing the spread of cholera, which has killed nearly 5,000 in Haiti since October.

The government is using citizenship laws to “try to erase Dominicans of Haitian descent from public records,” said Marselha Gonçalves-Margerin, advocacy director at the Robert F. Kennedy Center for Justice & Human Rights in Washington, which funds Dominican organizations that work on the issue. “These were people entitled to citizenship under the constitution at the time of their birth. You can’t retroactively apply a law that strips someone of their citizenship.”

The question of whether a person should automatically qualify for citizenship in the county in which they were born has sparked a similar debate recently in the United States.

Some Republican senators want to amend the Immigration and Nationality Act to limit birthright citizenship, claiming hordes of immigrants sneak into the U.S. just to give birth. A Pew Hispanic Center study found the claim to be largely erroneous.

Outside the Western Hemisphere, most of the world does not grant citizenship based solely on birth. But in the Americas, being born in a country is widely considered enough to gain citizenship in that country.

The Dominican Republic is a snapshot of what happens in a country when the rules are changed, rights groups said.

“In terms of the statelessness, the Dominican Republic is one of the worst cases in the world,” said Liliana Gamboa, a Dominican-based representative for the Open Society Institute, which has funded legal challenges to the Dominican citizenship laws. “There are people who have been here for decades. These are doctors, lawyers, baseball players — people who could be the next leaders of the country. And they’re having their citizenship taken from them.”

In an interview, Dominican officials acknowledged that people were having difficulty obtaining documents. But they rejected the notion that the children of Haitian immigrants were targeted.

“The idea that it’s based on race or that it’s somehow a racist system is wrong,” said Brigida Sabino, director of the civil registry’s division in charge of issuing the documents. “The truth is that as many Dominicans have experienced this problem as foreigners.” The office was not able to provide statistics.

In early May, Haitian President-elect Michel Martelly discussed the issue with Dominican President Leonel Fernandez. “It’s a serious problem when a person does not know where he comes from or where he belongs,” he said in an interview with El Caribe newspaper.

The Dominican government has undertaken a $100 million modernization of its civil registry system, funded mostly with money borrowed from the World Bank. It has scanned and digitized about 20 million documents, everything from birth certificates to marriage licenses — and, in the process, discovered that massive fraud was committed under the old system.

“There were people who used their neighbors’ identification to register a child because they wanted that child to be Dominican,” said Miguel Angel Garcia, who is overseeing the modernization process for the government.

The government is investigating those cases and, in the meantime, denying new documents to anyone whose file has been red-flagged. Those born to Dominican parents or immigrants legally in the country will receive their documents. However, if the investigation reveals the person was born to illegal immigrants, they will not qualify for citizenship, he said.

In the case of Jose Remie, that means none of his nine children are citizens. A Dominican recruited him from his home in Haiti’s capital, Port-au-Prince, to work as a bracero in the sugarcane fields back when sugar was still a thriving industry in the Dominican Republic. He came with his wife, Betilia Altimie, in the 1970s, he said.

“I had nine children here and worked my whole life for them,” he said, speaking the rudimentary Spanish he learned in the fields.

They settled in one of the hundreds of Dominican "bateyes," small villages built for cane workers. Most bateyes have charming names like Esperanza (Hope); Remie lives in one called Bienvenido (Welcome). In reality, they’re homes to the poorest of the poor.

On a recent day in Bienvenido, children tossed a can around a dirt road barely wide enough for a car, not that many residents owned one. Merengue music blared from the local convenience store. Old men took refuge from the blaring sun under the few scraggly mango trees.

Remie’s family gathered in the dirt yard in front of his two-room plank shack. Two children lay in a little shack about the size of a doghouse in the yard. It was an additional bedroom hastily constructed when the family grew too big for their homes, Remie’s daughter Elena explained.

“None of us can work because the first thing the employer asks for is a cedula,” she said, referring to the national identification card. “But none of us can get a cedula because we can’t get any documents.”

Elena Remie can’t register her children in the local school, either, even though education is supposed to be available to all children, regardless of their legal status in the country.

He’s one of what Gamboa, from the Open Society Institute, calls “a generation of children that will be potentially stateless.”

Sabino, of the government, said any children born to undocumented immigrants will be registered as foreigners so they can apply to for citizenship in their parents’ home country.

In Elena Remie’s case, there is no home country to pass on to her child.

“I’m not Haitian. I’ve only been there once to visit my grandmother,” she said. “I’m Dominican, even if they tell me I’m not.”