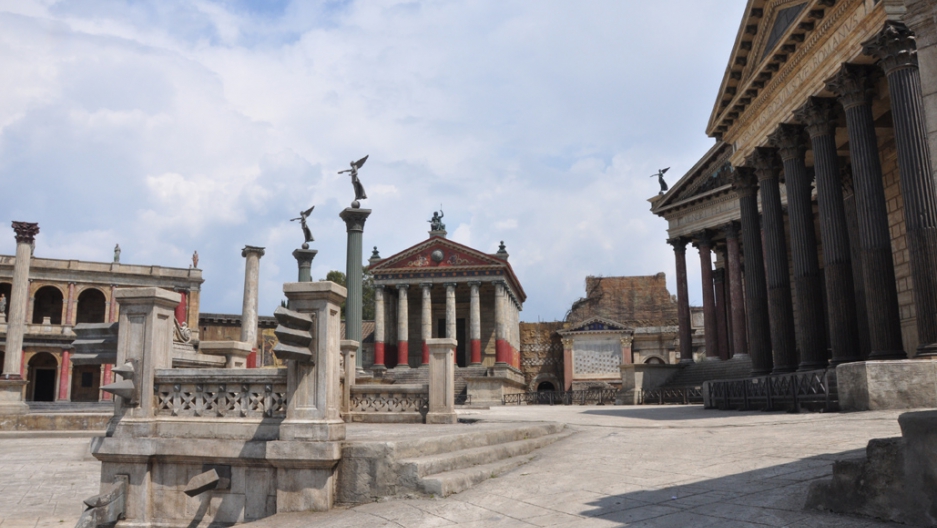 A view of the studio set for the HBO/BBC series "Rome."
Credit: Amanda Ruggeri
Share

ROME, Italy — Mussolini called Cinecitta the place where “dreams become reality.” In Rome’s biggest movie studio, Elizabeth Taylor and Richard Burton fell in love on the set of "Cleopatra," Audrey Hepburn acted her gamine best in "Roman Holiday," and Federico Fellini filmed the same celebrity culture he was a part of in "La Dolce Vita."

Now, for Cinecitta’s 74th birthday, the studio has opened its doors to the general public.

Last week, at the opening of Cinecitta Si Mostra (“Cinecitta Shows Off”), ticket-holders traipsed through the buildings once haunted by Fellini and his cohort, admiring the flotsam and jetsam of Italy’s cinematic past. The tour also included glimpses into more current productions, such as the street designed for Martin Scorsese’s "Gangs of New York" and the studio’s four-acre set for HBO's "Rome," complete with faux-Via Sacra and Arch of Janus.

At 10 euros ($15) per ticket, the show is as much a coup for Cinecitta as for movie buffs. And, if all goes as planned, the exhibit, which ends Nov. 30, will be followed by a permanent museum and possibly even a theme park at the location of another Cinecitta-owned studio south of Rome.

But Cinecitta's directors are insistent: Opening a museum in the studio doesn't mean that its days of moviemaking are over. “Cinecitta is alive, working, and developing to be more and more international,” said Luigi Abete, the president of Cinecitta Studios. “The show is a sign of growth, not of crisis.”

The problem is more with Italian film itself. Beneath the glitz and glamour of the show, there are signs of what is amiss. While Anita Ekberg’s black velvet dress worn for 1960’s "La Dolce Vita" evokes universal interest, English-speakers shrug in response to the papal vestments from this year’s "Habemus Papum." The days when everyone knew the new big film coming out of Italy, the days of Fellini and Rossellini, Liz and Sophia — they’re over. (For the record: "Habemus Papum," or “We Have a Pope,” is a film directed by Nanni Moretti that is competing in the Cannes Film Festival this year.)

Across the board, industry insiders agree: From the fame and fervor of 50 years ago, Italy’s movies have slipped from the world stage. “Italian films are not international,” said Francesca Cualbu, director of marketing at Filmauro, one of Italy’s biggest production companies. “I see what earns at the box office. And our movies, when they are released in the United States — it’s peanuts, honestly.”

The cinematic landscape has changed since the “golden age” of the 1950s and 1960s. Then, Italy was cheap. American directors and producers came to film in Cinecitta to take advantage not just of the flourishing film culture, but the lira. The films that were made held universal appeal and themes, opposed to the more-local movies that tend to be made in Italy today. At the same time, World War II had destroyed the old ways of doing things, clearing the way for new creativity and sparking the desire to tell the country’s story.

Now that it's on the euro, Italy is comparatively more expensive for Americans. As times have changed, Italy's star power has diminished, with few Italian actors or directors having the international name recognition of Fellini or Loren.

Still, Italian cinema is commercially successful within the country’s borders.

“In spite of all the words and the theories about the situation in Italy, Italian cinema is doing extremely well. I would say extraordinarily well,” said Riccardo Tozzi, the producer of 1999’s "Tea with Mussolini" and founder of the production company Cattleya. By the end of the 1990s, he said, Italian movies’ share of the Italian market had sunk to about 12 percent. This year, it will be around 45 percent, Tozzi said, higher even than the market share of French films in France.

One successful genre in Italy is comedy. The “cinepanettone,” or annual Christmas films, generally characterized by ribald jokes and lots of pretty, skin-baring women, consistently rake in profits. This past January, though, a new comedy crushed even these. Checco Zalone’s "Che bella giornata" (“What a Beautiful Day”) took in 43 million euros in the theaters. That is 1 million more than "Titanic" and 12 million more than the previous top Italian hit, "La vita e bella" ("Life is Beautiful"). Another comedy, "Benvenuti al sud" (“Welcome to the South”), co-produced by Berlusconi-owned Medusa and Tozzi’s company, Cattleya, raked in almost 30 million euros.

Just because Italy’s comedies are successful at the box office, though, doesn’t mean the critics are thrilled with them. Nor does it mean the films are likely to travel. Since the movies play on local humor — stereotypes about Italy’s south and north, for example, or about its police force — it’s particularly difficult for them to find success abroad. “If you say ‘let’s do a commercial film’ to an Italian producer, he’ll say, ‘Well, let’s do comedy.’ But then his comedy will never leave Italy,” said Anthony Souter.

That’s something Souter is trying to change. Half-British, half-French and living in Rome, he runs the production company Alphapictures with his Italian wife, Francesca Prandi. They seek to create films in Italy for an international market. His current project, "Fatten Her," is an English-language, Italian-made film about an Alitalia hostess who falls in love with an so-called “chubby chaser” in New York. But, Souter said, getting funding or interest for that kind of cross-cultural film has been an uphill climb.

One problem, Souter and others say, is Italy’s funding mechanism. In general, films that don’t have one of Italy’s handful of big producers behind them have to compete for public funding. That funding has been cut in recent years, and now is about half of what it was a decade ago.

More troublesome, say industry insiders, is the way that films are picked for funding — or the way that directors choose their actors. It highlights a problem affecting Italian society in general.

“In America, if you’re good, no matter who you are or your last name, you have an opportunity to work in this business,” said Diana Santi, the overseas program director for the New York Film Academy. “Here, it’s really tough unless you have a heritage. I don’t want to sound too much against Italy, but it’s just that it’s in our blood. It’s who we are. In any field. Even if you have a bakery shop: If your dad owns the bakery shop, you’re going to be working there.”

That’s why many in the industry use the word "artigiano" to describe Italy’s film landscape. Like Italy's leather workshops and bakeries, it is "artisanal." By keeping companies “within the family,” Italy retains the traditions and, in some ways, the high quality that sets its products apart. But it also keeps out fresh talent. Santi said that, every year, some 200 to 250 Italian students contact her about moving to the United States, hoping they’ll find better luck in their careers abroad.

In the unending hand-wringing over Italy’s film industry, though, it can be easy to forget that, even in the midst of the cinematic heyday, not all was perfect. In 1954, when the actress Gina Lollobrigida was making an unheard-of six figures, Alberto Sordi was starring in "An American in Rome," and Sophia Loren had become a household name, not everyone was so sure the industry was solid. “The awful truth,” wrote a reporter for Time Magazine that year, is that “the Italian movie industry is just about the craziest thing constructed in Italy since the Leaning Tower of Pisa, and it may fall down and go broke at any moment.”

Today, those in the Italian industry today are striving to put it back together again. And, despite the many obstacles, they say they just might succeed.

“I think we are growing up,” said Piersandro Buzzanca, a Rome-based director who studied in the United States. “If producers start to put more of their own money into films, if they don’t hire their friends but professionals, we will have a chance.” But, he adds, “This is Italy, so you never know how it will end. You never, never know.”

As for Cinecitta? Out of every 10 Italian films, four use Cinecitta’s services. From January until April of this year, the studio saw production or post-production work on 40 different films or television episodes (34 of these were films), including the Cannes-destined "Habemus Papum." And it's come a long way since the mid-1990s, when the studio nearly went bankrupt; now a private company, Cinecitta Studios' annual income is double what it was then. So there's reason for optimism.

Then again, with both a theme park and a museum in the works, Cinecitta has clearly decided investing in the golden age of Italian film is a smart move — especially since the future is uncertain.