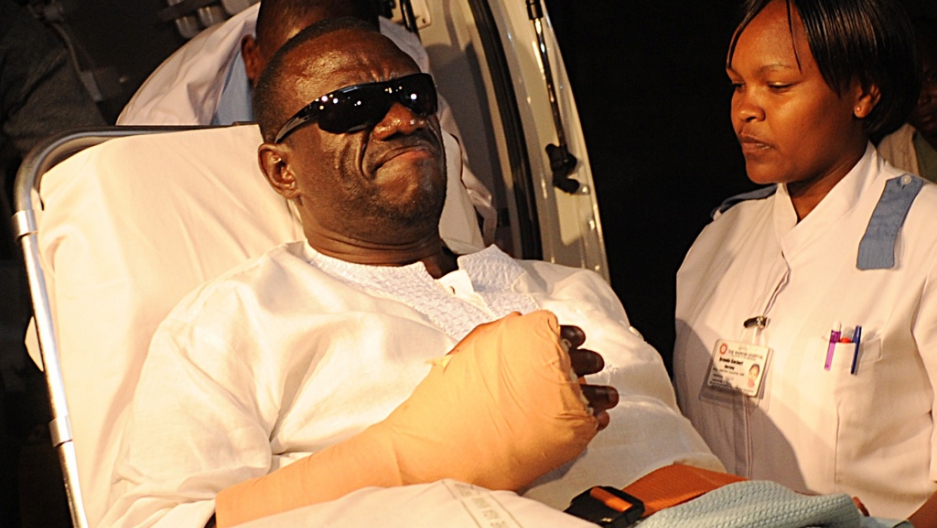 Ugandan opposition leader Kizza Besigye arrives at Nairobi hospital for treatment on April 29, 2011. Besigye was injured when he was arrested by Ugandan police when he led a peaceful protest against Ugandan President Yoweri Museveni's government.
Credit: Simon Maina
Share

NAIROBI, Kenya — From his hospital bed, Ugandan opposition leader Kizza Besigye vowed to continue his fight for reform, despite injuries he sustained from his brutal arrest in Kampala last week.

“We will continue, absolutely and without any doubt,” Besigye said. “I have no illusions, I am sure the dictatorship will become even more ruthless in the short run. But we cannot back off now.”

Wearing dark sunglasses to protect his eyes, which had been burned by tear gas, and with his hand bandaged from a bullet wound, Besigye told GlobalPost he had received death threats. He said he will not be deterred by the the violent attacks and will continue his efforts to end what he called the “military dictatorship” of Ugandan President Yoweri Museveni.

Besigye organized a series of “walk-to-work” protests that began in Uganda last month to demonstrate against the escalating cost of fuel and food. Although the demonstrations were peaceful, the Museveni government used its security forces to stop the protests.

At least five people have died in the demonstrations. In the worst unrest to date, riots erupted across the capital Kampala last week in response to the violent arrest of Besigye in which police smashed his car windows with a hammer and the butt of a gun before attacking Besigye with cans of pepper spray.

Two people were killed and hundreds injured and arrested as police and army retook Kampala's streets from mobs of angry young men.

On Wednesday hundreds of members of the Uganda Law Society marched to the High Court to hand over a petition demanding an end to state brutality.

Besigye has been arrested four times since he began spear-heading the walk-to-work protests on April 11. During one standoff with security forces he was hit in the hand with a rubber bullet before being arrested.

Museveni came to power in 1986 at the head of rebel army and won another five year term in elections in February in which he soundly defeated Besigye, his former comrade and long-time political rival.

But Uganda's inflation, which has reached 14 percent, combined with growing anger at perceived government profligacy has given Besigye fresh political impetus.

It is estimated that Museveni spent as much as $350 million on his successful re-election campaign, he is planning a lavish inauguration ceremony later this month that will cost over $1 million and hopes soon to take delivery of a stock of new military hardware costing $740 million, including Russian fighter jets.

At the same time Museveni is showing signs of losing touch with ordinary people, a skill that has previously deployed to great effect. As poor Ugandans are hurt by rising fuel prices, Museveni gave a speech in which he urged people to “use fuel sparingly… Don’t drive to bars,” as if this was something most could afford to do anyway.

With revolutionary fervor roiling North Africa and the Middle East, Museveni is determined to crush the protests and maintain his grip on power.

Besigye is the focal point of opposition.

“There has been a very determined effort to stop me from the walk and to do it in such a manner that it instils fear in anyone who may engage in campaign of defiance,” said Besigye.

He said he has received death threats, often in the form of warnings from confidantes, but insisted that the protests would not only continue but would grow.

“Now is the time for ordinary people to assert themselves and confront the forces of the dictatorship,” he said.

But with Uganda’s long and bloody history during the years of Idi Amin and Milton Obote in the 1970s and 1980s he said Ugandans have little appetite for violent revolution of the sort that has broken out in Libya.

“The endgame is a democratic transition from military dictatorship to a democratic dispensation where the free will of citizens rules, where the regime is accountable to them,” he said.

Besigye, a medical doctor, was Museveni's friend and personal physician when they were in the rebel group fighting to win control of Uganda in the early 1980s. After several years in power, Besigye broke away, charging that Museveni had lost his way and was no longer committed to democracy.

In 2001 Besigye fled into self-imposed exile in South Africa where he stayed for four years, but for now says he plans to return to Uganda early next week: “It doesn’t serve me or the struggle to be away from Uganda now regardless of the risks involved.”