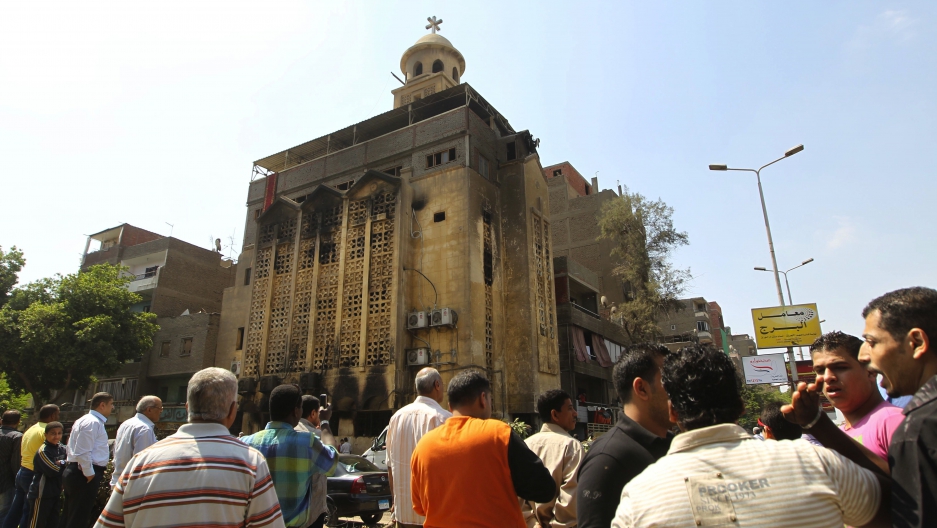 Egyptians stand in front of the damaged Virgin Mary church in the popular area of Imbaba in the Egyptian capital of Cairo on May 8, 2011, after clashes between Muslims and Christians which reportedly left 10 people dead.
Credit: Khaled Desouki
Share

CAIRO, Egypt — Egypt's Supreme Council of the Armed Forces has announced that 190 people arrested over deadly Muslim-Christian clashes in Cairo will be tried in military court, according to Agence France-Presse.

Egypt's prime minister also called an emergency Cabinet meeting Sunday, a day after the sectarian clashes outside a Cairo church — over claims that a Christian woman was being held and prevented from converting to Islam — resulted in the deaths of at least 10 people and left 186 hurt.

Amid gunfire, petrol bombs were thrown, setting alight the St Mina church in the Imbaba neighborhood before the army and emergency services moved in, according to the Guardian. A second church was reportedly burned down. Tanks and troops patrolled Imbaba on Sunday.

Late Sunday, around 100 angry Coptic protesters had gathered in front of a cordon of Egyptian army soldiers outside U.S. Embassy, demanding better protection of their churches.

Peter Mossad Shawky, 22, Coptic protester told GlobalPost: "The Egyptian army obviously can't protect our churches from attack. We want the Americans to force Egypt's interim government and army to give us more protection."

Tensions between Egypt's Muslim majority and its Coptic Christian minority have been rising, with a number of violent clashes reported between the two groups in recent months.

Eyewitness to events in Imaba — which has some of Cairo's worst slums — described how several hundred Muslims massed outside the St Mina church demanding the woman attempting to convert be surrendered.

Egyptian media described the attackers as Salafis — fundamentalist Muslims who want to see the imposition of Sharia law and have links to Saudi Arabia — the Guardian reports, adding that elements of the Hosni Mubarak regime were said to have encouraged them.

But Imam Youssef Iman, an Egyptian Salafi, told GlobalPost: "The Salafis were not the ones who started this. They were only protesting outside the church. The Christians assumed we were going to attack them so they shot at us. The Salafis only were defending themselves."

Abdullah Mohamed Said, Cairo Muslim resident: "All of these problems must be ignited by forces of the old regime. Everything was so peaceful between Christians and Muslims in Egypt during the revolution. Why else would it be happening now?"

Father Dawood Ibrahim, the head priest in Imbaba who is fearful that his church could be attacked in the future: “I don’t blame all the problems [between Copts and Muslims] only on the old regime. The new government and police forces should be working more to protect Christian people, especially in light that Salafis now want to attack our churches. We just don't have enough protection.”

Prime Minister Essam Sharaf postponed a trip to Bahrain and the United Arab Emirates to discuss the church attack, according to EgyNews, Egypt's official news agency.

The Supreme Council, which has ruled Egypt since a popular uprising toppled president Hosni Mubarak, is sensitive to any sign of deteriorating security.

On its Arabic language Facebook page, it said it had ordered "the transfer of all those arrested in connection with (Saturday's) events, and they number 190, to the Supreme Military Court, as a deterrent to all those who think of toying with the potential of this nation."

The council also said it would "set up a committee to assess the damage caused by the clashes and to restore all property and places of worship to how they were before the events."