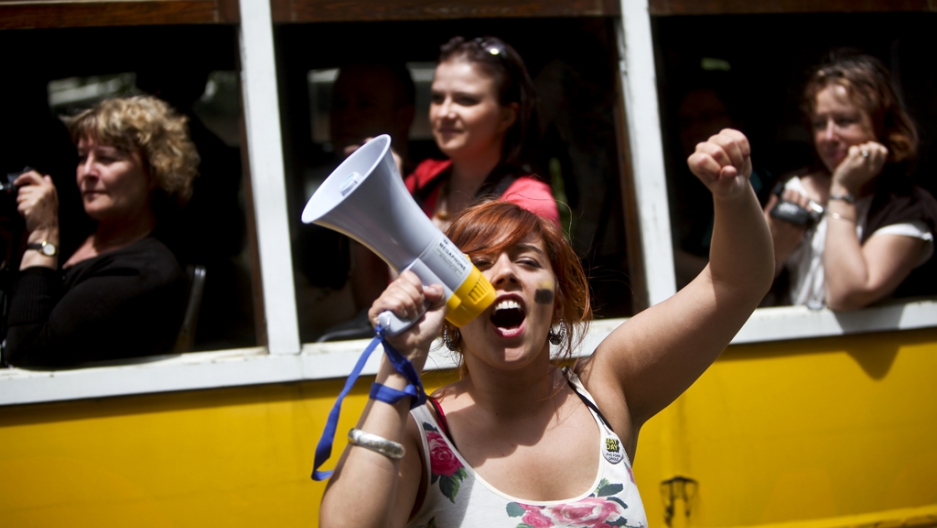 Demonstrators shout slogans and hold banners as they take part in a rally in downtown Lisbon on May 1, 2011 as tens of thousands of Portuguese marched in protest of austerity measures expected to be imposed under the terms of a European Union and International Monetary Fund bailout plan.
Credit: Patricia de Melo Moreira
Share

BRUSSELS, Belgium — The Portugal bailout announced this week requires it to pay interest of over 5 percent on its 78 billion euro ($113 billion) loan and enact drastic austerity measures that will likely push the country into recession until 2013.

But even such dire measures will not silence the growing ranks of doubters in the European Union's richer northern nations. Having seen the EU use their taxpayers’ money for similar bailouts to Greece and Ireland over the past year, they have had enough of shipping funds to what they regard as profligate peripheral partners.

“If you want to help Greece and Portugal, then you have to say 'get out of the euro-zone,'” said Peter Gauweiler, a member of the German parliament representing the conservative Christian Social Union, an ally of Chancellor Angela Merkel's government.

“This is a country where most people retire as soon as their graduation party is over. We work while they eat souvlaki and drink ouzo,” Dutch far-right politician Geert Wilders said of the Greeks last year. “Not one cent for the Greeks and that goes for the Spanish and Portuguese as well.”

The euro zone's crisis has been a boon for eurosceptic politicians in nations that contribute most to the EU's bailout fund. Wilder's party almost tripled its score in national elections last year and the minority center-right government in the Netherlands depends on his support for their survival.

In Finland, the True Finns party rose from nowhere to become the third biggest party in parliament in recent elections after campaigning on a vehemently eurosceptic ticket that included opposition to the Portuguese loan.

"The party is over," True Finn leader Timo Soini said of the bailouts. "Why should Finland bail anyone out? We won't allow Finnish cows to be milked by other hands."

The True Finns could scupper the Portuguese bailout, if they can muster enough support in the Finnish Parliament to veto the EU deal. That looks unlikely unless they can secure support from mainstream, pro-European parties.

However support for the True Finns, Wilder's Freedom Party and the rejuvenated National Front in France, in addition to opposition to the bailouts from more mainstream parties, notably in Germany, have called into question the unity of the euro zone. Solidarity between rich and poor EU members has been a mainstay of the EU since its origins in a series of trade treaties in the 1950s.

While the euro has been a prime target of the new nationalism in Europe, an even bigger gripe for the populist on the right is immigration. A sudden surge in migrants crossing the Mediterranean from destabilized countries in North Africa has put pressure on another of the EU's showpiece projects.

Along the euro, the abolition of border controls between most of the EU's 27 member states is arguably the most tangible achievement of the EU in the last 25 years.

A 1985 agreement signed by the EU states in the Luxembourg village of Schengen means citizens can travel passport-free within most of the EU (Britain and Ireland have remained outside, while Romania and Bulgaria have not yet been allowed to join).

That could be about to change due to a particularly nasty spat between Italy and France over the surge of North Africans seeking refugee status.

Italy's right-wing Interior Minister Roberto Maroni suggested last month that Italy should consider leaving the EU, claiming other EU nations had refused to help take in around 25,000 Tunisians who have arrived in his country since the revolution there. Instead, he issued the migrants with Italian resident papers that allowed them, under the Schengen agreement, to travel freely within the EU. Most promptly headed to France, triggering a furious reaction from Paris.

Under pressure from Paris and Rome, EU headquarters hastily drew up a revision of the Schengen rules, making it easier for nations to re-impose border controls. The European Commission insisted the frontier posts would be back only in emergency situations, but the news has led some to believe that another cornerstone of the EU is under threat.

"Free movement within the Union … is a revolution that has profoundly transformed the lives of tens of millions of people, who can now come and go without a passport or visa,” wrote the French daily Liberation in a recent editorial.

“It is that progress, which is both historical and democratic, that is sticking in the throats of the nationalists and opportunistic politicians of all stripes who dream of recovering, at the earliest opportunity, the old attributes of sovereign nation states."