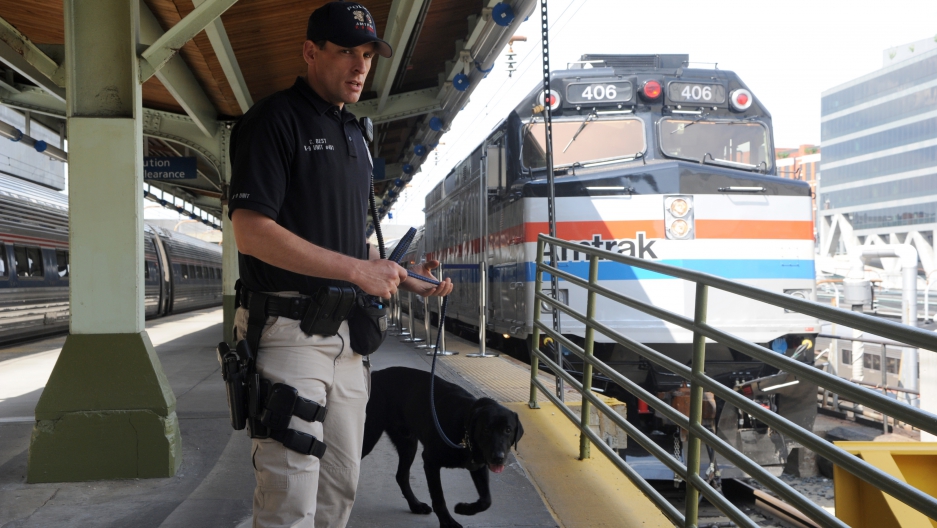 An Amtrak police officer and a sniffer dog patrol Union Station in Washington on May 6, 2011, five days after al-Qaeda head Osama bin Laden was killed by US Navy Seals in Pakistan. Intelligence seized from bin Laden's compound showed his al-Qaeda network pondered strikes on US trains on the 10th anniversary of the September 11 attacks, US officials said.
Credit: Stephane Jourdain
Share

BOSTON — Osama bin Laden is dead. Or is he?

That’s a debate that may go viral, birther-style, among segments of the Muslim world unless the Obama administration releases images of his corpse — or better yet, video of the Islamic rights bestowed on him aboard the USS Carl Vinsson.

But one thing is for certain: as evil as Osama bin Laden was, he was also a brilliant strategist. Even with his body at the bottom of the Arabian Sea, he remains a fearsome foe.

Beyond the wars that he triggered and the deaths he wrought, he is among the most influential people of our time, having changed the world — for the worse — in ways big and small.

Bin Laden reshaped the American psyche and landscape. Some of the changes are as subtle as they are seemingly banal: the massive planters and jersey walls that have cropped up since 9/11 surrounding office towers and public buildings; the striptease expected of us before we board planes.

Other changes are as sweeping as they get: the government's shadowy, far-reaching national security and intelligence apparatus “so big, so complex and so hard to manage, no one really knows if it's fulfilling its most important purpose: keeping its citizens safe,” according to last year’s haunting Washington Post investigation.

All he had to do was inspire a half-witted extremist to stuff a crude bomb in his shoe or underpants, and he could change our standards of decency. You can imagine him basking in news of car bombings in Baghdad and drone killings in Pakistan, knowing that these reports would bring further anguish and alienate the United States from the Muslim world.

But scaring us was only part of bin Laden’s mission. Terror — as American policymakers largely failed to realize — was a tactic rather than an objective.

Although many Americans bought into the logic that bin Laden wanted nothing more than to kill and destroy, the spectacular telegenic mass murder — as staged on 8/7/98 at the U.S. Embassies in Nairobi and Dar es Salaam; on 9/11/01 in New York and Washington; on 10/12/02 in Bali nightclubs; on 3/11/04 in Madrid’s train system; on 7/7/05 in London’s underground, among others — was in fact a means to an end.

It is curious that bin Laden was killed at this moment, when citizens across the Middle East are rebelling against oppressive rulers, and when U.S. lawmakers are confronting America’s budget problems. One of bin Laden’s primary political objectives was to eliminate infidel Americans from the Muslim soil, and to liberate Muslims from oppressive and (in his view) apostate regimes supported by the West.

In recent years, his movement has lost support in the Islamic world, according to the Pew Research Center, due largely to the widespread carnage that it perpetrated on fellow Muslims.

But in the tumultuous years ahead, as the Middle East struggles to reinvent itself, time will tell whether his message will catch on again, the same way extremism has clamored for a foothold in other newly liberated societies, such as Indonesia a decade ago. Now, with the charismatic tyrant out of the way, this is less likely to happen.

As for America’s dire financial situation, as Daveed Gartenstein-Ross points out in Foreign Policy, bin Laden’s strategic objective was to bankrupt the United States, just as he had helped it bleed the Soviet Union by miring it in a long and costly conflict in Afghanistan. It was the only way a small group of poorly-funded extremists could hope to defeat a super-power.

“One lesson bin Laden learned from the war against the Soviets was the importance of his enemy's economy,” Gartenstein-Ross writes. “The Soviet Union didn't just withdraw from Afghanistan in ignominious defeat, but the Soviet empire itself collapsed soon thereafter, in late 1991. Thus, bin Laden thought that he hadn't just bested one of the world's superpowers on the battlefield, but had actually played an important role in its demise.”

Bin Laden obviously hasn’t bankrupted the United States. But how much has he cost us? The numbers are murky, given the secrecy that shrouds post 9/11 national security. But there’s enough information to conclude that the toll is astronomical.

The material costs to the United States of bin Laden’s attacks are only a small part of the total, but they are by no means insignificant.

The embassy bombings in Africa led to a multi-billion dollar increase in diplomatic security. The repair for the USS Cole was estimated at nearly $250 million. The 9/11 attacks are estimated to have cost New York’s economy $27 billion in the 15 months following the attack, rising to $50 billion to $100 billion if broader economic harm is included.

For many Americans, perhaps the most tangible aspect of the post-9/11 security apparatus is found at airports.

The government took over that role from private contracts following the attack. It has spent more than $40 billion over the past decade, Robert Poole, who advises the U.S. government on the matter, told U.S. News and World Report. The time spent waiting in lines cost Americans an additional $8 billion, Poole said. Most recently, in response to the 2009 Christmas day underwear bomber, the government allocated a billion dollars to purchase full body scanners.

The post 9/11 financial bloodletting has been most severe in military spending. In 2001, just as the country was finally cashing in on the post-Cold War peace dividend and getting its fiscal house in order and, the Pentagon budget had leveled off at about $300 billion — an enormous amount of money, but less than Washington spent when it was staring down Moscow.

These days, core Defense Department spending has nearly doubled to $550 billion. That supports a sprawling military that dwarfs all others, with 760 bases in 39 countries, including Djibouti and Bahrain — not to mention secret foreign interrogation centers, outposts that are deeply controversial and hard to justify absent the need to chase Al Qaeda.

But all that Pentagon bloat doesn’t even include the cost of the post 9/11 wars.

A recent study by the U.S. Congress’s non-partisan research arm calculated the direct costs of Iraq, Afghanistan and other post-9/11 operations at $1.28 trillion through 2011. The same study estimated that we’re on the hook for $1.8 trillion through 2021. (Regardless of the fact that there were no connections between bin Laden and Saddam Hussein, the U.S. would have never been able to justify pre-emptive war without images of the Twin Towers seared into American eyes, and eventually troops were forced to battle Al Qaeda in Iraq, so it’s only fair to include this as part of the terror war’s costs.)

Independent researchers suggest the war toll is far higher. For example, the Congressional Research Service estimates that the United States has spent just over $800 billion on Iraq alone through March 2011. But Nobel prize winning economist Joseph Stiglitz, along with Harvard lecturer Linda Bilmes, have calculated that the war would cost at least $3 trillion, including money that the United States will have to spend supporting wounded veterans, for example. They put the cost of both wars at $4 trillion to $6 trillion.

The clandestine budget is even more difficult to pin down, although it is safe to say that it has more than doubled since 9/11, with the 2010 budget thought to exceed $80 billion, according to Chris Hellman, military policy fellow at the Center for Arms Control and Non-Proliferation.

As for the actual hunt for bin Laden, that has cost more than a half trillion dollars, Al Qaeda expert Peter Bergen, told GlobalPost in an interview last month.

Even more ominous is the size of the U.S. government’s overall security outlay. This number, which is stated explicitly in the federal budget, includes a multitude of offices and bureaus relating to national defense. In U.S. President Barack Obama’s 2012 budget request, the number is $881 billion, up from $815 billion in 2010. This means that security consumes nearly one of every four dollars the federal government spends on all programs (including Social Security).

As we’ve mentioned elsewhere, if the U.S. security budget were a country, it would be the world’s 19th biggest economy, behind Australia (population 22 million) but ahead of Iran (73 million)

So, how much did bin Laden cost us? I'd put the bill somewhere around $4 trillion. But of course, many of the most profound costs incurred as a result of Al Qaeda remain hard to quantify.

Bin Laden recast America’s place in the world, forcing our diplomacy and leadership to be subservient to the war on terror. He compromised our prosperity and peace of mind, and distracted us from whatever global vision we had prior to 9/11. Above all, is the toll from the thousands of people lost in terror attacks and war, and the many more survivors and loved ones whose lives have been shattered.

On the other side of the ledger, Osama bin Laden’s operations were extraordinarily well-leveraged. Although the millionaire-Saudi-turned-terrorist led an ascetic and religious life, he understood how to engineer a high return investment. Al Qaeda spent no more than $400,000 on the 9/11 hijackings according to the 9/11 commission. By one estimate, the USS Cole bombing cost less than $10,000 to execute. As such, his strategy was frighteningly effective, and even sustainable.

Gartenstein-Ross — whose forthcoming book is called "Why Al Qaeda is Winning" — argues that the fight is far from over, given the legions of devout followers who have embraced his strategy. He cautions that America has a terrible habit of declaring “mission accomplished” prematurely, whether in Iraq or in Afghanistan (both post-9/11 and post-Cold War).

Yet with bin Laden gone, and with Al Qaeda suffering from low popularity in the Muslim world, let’s hope that it’s safe to think that the worst of the carnage is behind us, and this pricey battle we’ve been waging is nearing its finale.