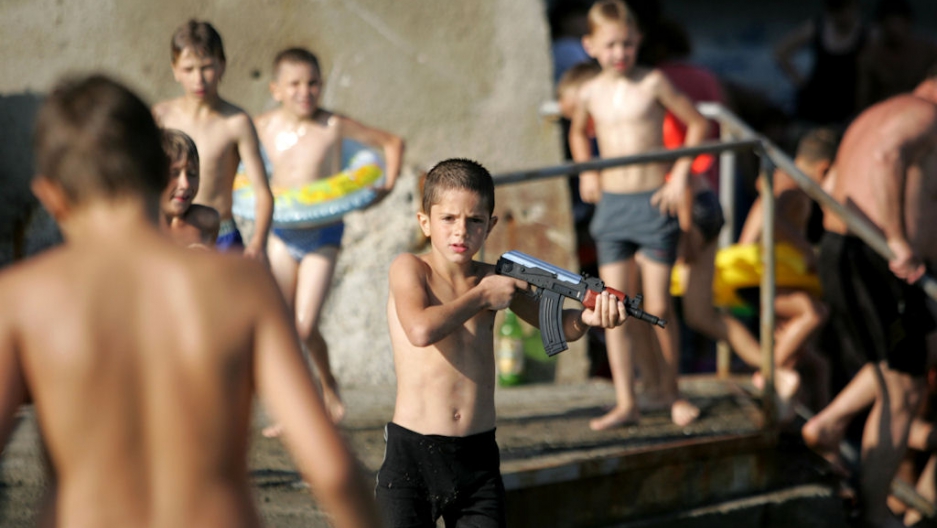 A boy plays with a toy Kalashnikov rifle at a public beach in Sochi, Russia on July 3, 2010.
Credit: Mikhail Mordasov
Share

MOSCOW, Russia — Viktoria Teslyuk left her home outside Moscow early one morning this March. The 16-year-old had a session with her math tutor, and dressed warmly to keep the morning frost at bay. That was the last anyone saw of her.

Normally, the case would be lumped with the hundreds of other murders that happen in Moscow each year. In 2010, 582 murder cases were opened in Moscow alone, according to the prosecutor general’s investigative committee. (Compare that to 471 in New York City or 312 in Los Angeles in 2009).

But Teslyuk’s case has stood out because she is the daughter of Robert Teslyuk, a top executive at Lukoil, Russia’s biggest privately owned oil company. Within days of her disappearance, the company issued a press release seeking information on her whereabouts.

Teslyuk’s disappearance came about the same time as another high-profile kidnapping, heightening fears that business-driven disputes, tempered after the wild 1990s, were returning full force.

With investigators still searching for Teslyuk, or her body, in late April, the son of another high-profile businessman went missing. Ivan Kaspersky, 20, was snatched on his way to work on April 19. His disappearance stood out for yet another reason. Kaspersky’s father is no shady tycoon, knee-deep in the sort of dirty business that still comprises a sizeable chunk of the Russian economy. Eugene Kaspersky is the 45-year-old founder of Kaspersky Labs, a leading computer security firm specializing in anti-virus, anti-spyware and anti-spam products.

The kidnappers asked for a 3 million euro ($4.5 million) ransom. As news of the kidnapping began to appear in the Russian press, newspapers were fed misinformation that Kaspersky had paid the ransom, as police hoped to defuse the pressure, lest the kidnappers make a drastic move. Ivan Kaspersky was rescued six days after his kidnapping, when security and police officers raided a sauna in the picturesque village of Sergeyev Posad, outside Moscow.

Five people have been arrested in the case. Russian media have identified the culprits as a couple in their 60s, their 29-year-old son and two of the son’s friends, who thought up the scheme to pay off their debts. Igor Markin, a spokesman for the investigative committee, told the ITAR-Tass news agency this week that the scheme was thought up after the couple watched a TV report on Eugene Kaspersky, who the day before was named one of the country’s richest men by Russian Forbes, with a fortune of $800 million.

Yulia Ponomaryova, a vice president at private security firm Alpha-Inform, says her firm has received a 20 percent increase in calls since the two incidents.

“Did people pay more attention to the security of their kids and loved ones in the 1990s? Without a doubt yes — nearly every other person was scared for their life,” she said. She said about 80 percent of her company’s business was devoted to protecting “VIP children.”

“People think today our luck has changed, but that’s not the case,” Ponomaryova said. “We don’t think the '90s are back, but the difficult economic situation means there are a lot of people who want to get rich quickly. They have always existed and will always exist. Since we don’t have a very high standard of living in Russia, they come from the regions and do this.”

Revenge killings, kidnappings, car bombs and shootouts were a hallmark of Russia’s turbulent transition to free-for-all capitalism. In the last year of the 1990s, police investigated 591 contract killings, before the numbers began to dip.

“Today, we advise all people — especially politicians in Russia, major businessmen, show business people — to pay attention to their children’s security,” Ponomaryova said. “The '90s aren’t coming back,” she repeated, “but a lack of money is leading more people to crime.”

Kaspersky spoke to Rossiya-1 television after his son was freed, according to Russian news agencies. “This crime directly affects the image of Russia as a state that hopes to be innovative,” he said.