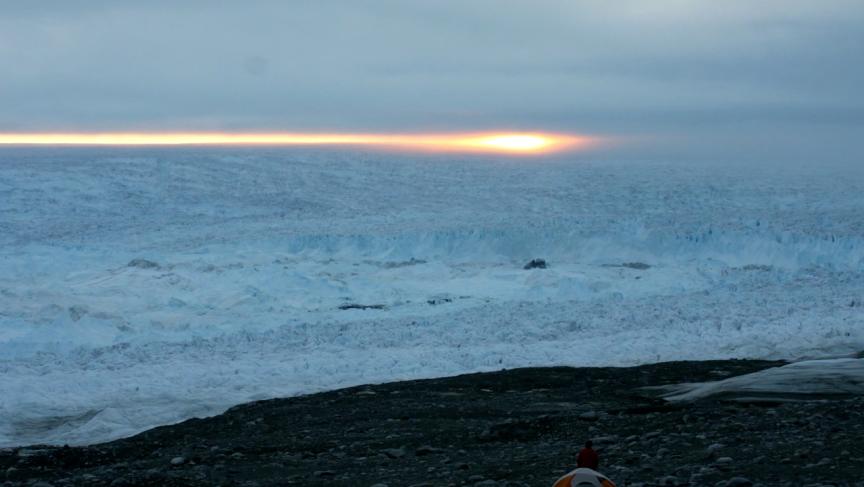 Share
By Daniel Grossman Two NASA pilots peer through the windshield of a four-engine turboprop plane flying low and slow over Greenland's glistening ice sheet near Baffin Bay. The Orion P3 was built to ferret out Soviet subs during the Cold War, but now it's searching for a new threat – melting ice near the Earth's poles. Scientists on board are using remote sensing devices to measure the thickness of the ice sheet around the Jakobshavn Glacier, one of the fastest flowing glaciers in the world. Climate researchers need accurate measurements of the changing thickness of the Greenland ice sheet in order to know how quickly it's responding to global warming. NASA glaciologist Lara Koenig said the trend over the last few years is pretty clear. "What we've seen is that the ice sheet is losing ice," Koenig said. She added the melting is contributing to a rise in sea levels around the world. The NASA findings dovetail with those of a new report released this week that projects global warming will cause sea levels to rise from three to five feet over the next 90 years, inundating many coastal regions, and that much of the increase will come from melting ice in the Arctic and Greenland. Melting at an increasing rate The Greenland Ice Sheet is huge – bigger than France, Spain and Germany combined, and more than a mile thick. If completely melted, its ice would raise global sea level by about 23 feet. No one expects that to happen in the foreseeable future. But the data collected by a series of NASA projects and others have shown that the Greenland Ice sheet is melting at an increasing rate. University of New Hampshire glaciologist Mark Fahnestock said the speed with which things are changing here has changed how he thinks about his work. If you work on glaciers, he said, you get a lot of jokes about the glacial pace of things. "People think about that as being slow. But glaciologists don't think about change as being slow anymore." Fahnestock studies the Jakobshavn glacier from the ground. He said in the late 1990s, the glacier suddenly doubled its speed. Now, each year, it releases about 10 cubic miles of ice, enough to flood the entire state of Texas in two inches of water. Fahnestock said pieces snap off the edge in incomprehensibly large blocks weighing up to a billion tons. "You get these icebergs that are about a kilometer thick and maybe 400 meters wide along the glacier," Fahnestock said. "And they flip on their sides and go horizontal. It sounds like 50 fright trains all moving at the same time." Fahnestock said so many icebergs crash into the ocean that the edge of the ice sheet around Jakobshavn has thinned like a deflated air mattress. And he said the same thing is happening to glaciers all over Greenland. "The retreats now are very dramatic. They are, in combination around Greenland, a very large change," Fahnestock said. New study The comprehensive new study released this week by a team of scientists from the eight Arctic countries shows that the change isn't limited to Greenland. The report says the entire northern part of the world, from Alaska to Siberia, is warming and changing far faster than scientists had predicted just a few years ago. But to paraphrase Bob Dylan, you don't need a glaciologist, to know which way the ice flows. Just ask Adam Lyberth, a native Inuit guide who's lived all of his 49 years here in Greenland. On a recent spring day, Lyberth was bringing tourists to the edge of the ice sheet near the town of Kangerlussuaq. "We tell the tourists that this is the cleanest air you can inhale on Earth," Lyberth said. And there were a lot of awestruck faces as the group looked out over a landscape of black, white and blue ice. But recently Lyberth has noticed some weird changes in the landscape he thought he knew so well. Like a 100 foot high mound of smelly grey mud that had squirted up through a crack at the ice sheet's glassy edge. It smelled awful, "like a pig farm. It's a new experience, a pig farmer smell on ice cap," he said. Lyberth said it seems the ground beneath the ice edge was melting, releasing partly decomposed organic matter. And he's noticed other changes, like more frequent ice quakes – shaking caused when the ice sheet lurches. Lyberth can't guess what this might mean for the future of Greenland. But NASA's airborne scientists hope their research flights will help better predict the future here at the edge of the Greenland ice sheet and beyond.