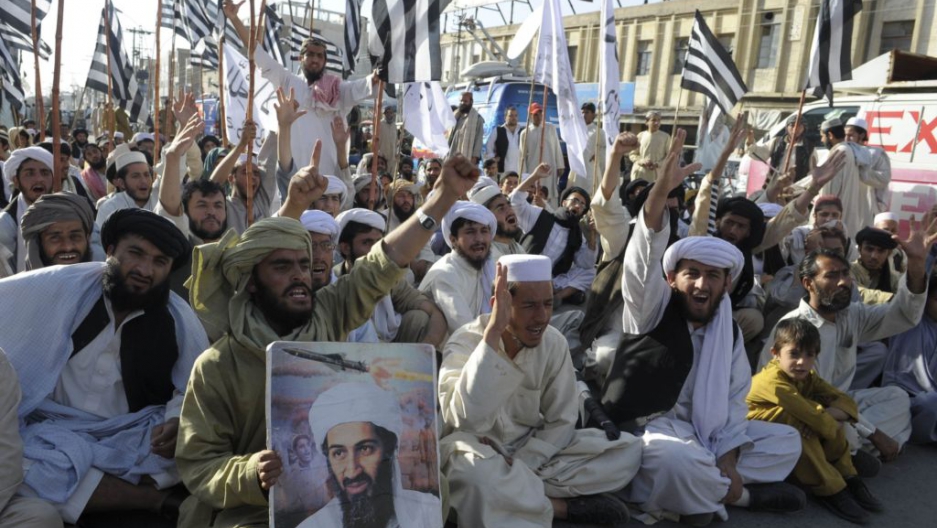 Taliban supporters shout anti-U.S. slogans during a protest in Quetta on May 2, 2011 after the killing of Osama Bin Laden.
Credit: Banaras Khan
Share

PESHAWAR, Pakistan — The world, and the United States in particular, has breathed its sigh of relief. Osama bin Laden is dead.

But victory can be fleeting. And as such, still looming over the heads of American military leaders is what might be an even bigger challenge — the Taliban.

Security analysts said that the death of the world’s most-wanted man would have little effect on the Taliban in either Pakistan or neighboring Afghanistan, where the United States has been fighting the Taliban for more than a decade.

And although bin Laden’s death might help smooth the way for an eventual diplomatic solution and a quicker withdrawal of foreign troops, analysts said that such a reality remains a long way off, which is evident by the spring offensive that both the United States and the Taliban are now gearing up for.

“Bin Laden’s death is a big blow to global terrorism, and it will certainly damage Al Qaeda’s spirit. But there are dim chances of any kind of negative impact on the Taliban insurgency,” said Rahimullah Yusufzai, a Peshawar-based expert on Afghanistan who interviewed the slain Al Qaeda leader twice.

Besides deep roots in rural Afghanistan, there are various other factors — which Al Qaeda has always lacked — that have helped the Taliban belittle the world’s largest military for more than a decade.

“The Taliban insurgency is an indigenous movement that did not depend on Al Qaeda. In fact, Al Qaeda was, and still is, dependent on the Taliban in Afghanistan,” he said.

The Taliban itself, although skeptical that bin Laden was actually killed, shrugged off the idea that his death would have any effect on their fight against the U.S.-led coalition in Afghanistan.

“We still have no reason to believe that bin Laden is dead because America has not provided any cogent proof to prove its claim,” Zabiullah told GlobalPost. But, he said, even if bin Laden was dead, there would be no negative impact “because our struggle is a national struggle, which will continue until the ouster of the occupying forces from the Islamic Emirates of Afghanistan.”

Zabiullah said that thousands of Taliban fighters were ready to launch “Operation Badr,” the planned summer offensive by the Taliban against U.S.-led forces.

“Karzai and U.S. officials, instead of warning us, should get ready to face Operation Badr,” Zabiullah said, referring to Afghan President Hamid Karzai’s earlier warning to Taliban leader Mullah Omar that he should learn from bin Laden’s demise and stop fighting.

Despite all the rhetoric, some analysts said the death of bin Laden could eventually help set the stage for the two parties to reach a peace agreement.

“Bin Laden was a big hurdle in any kind of settlement between the U.S. and the Taliban,” Yusufzai said, referring to the U.S. condition for peace that the Taliban disassociate itself from Al Qaeda.

Reaching any diplomatic solution, however, is unlikely to be easy or happen in the near future. The Taliban have ratcheted up their attacks in recent weeks and appear to have infiltrated the Afghan security forces that the United States has been spending so much time and money to train to ensure the future stability of the country.

Most recently a gunman opened fire in Kabul’s airport, killing nine people on April 27. The Taliban immediately said the act was carried out by one of their own, a sleeper agent named Azizullah.

This was only the latest in a series of incidents where men in military uniform have opened fire on NATO personnel. Five troops were killed in Jalalabad on April 16, another two in Faryab at the beginning of the month.

The Defense Ministry was attacked on April 18 by another would-be assassin dressed in army fatigues and the Kandahar police chief was assassinated by a suicide bomber in a police uniform on April 15. On April 25, the Taliban staged a brazen escape from Sarposa prison, in Kandahar, in what many say could only have been a plot planned and executed with high-level government or military involvement.

And so the situation on the ground appears to be steadily deteriorating. The Taliban claim that they have dozens of sleeper agents inside the armed forces which, true or not, is sowing fear and suspicion among military men and women, both Afghan and international.

“Although peace seems more possible after bin Laden’s elimination, the realities on the ground suggest something very different,” said Hamid Mir, an Islamabad-based analyst, and incidentally the last journalist to interview bin Laden in 2001 in Jalalabad.

Mir, however, agreed that bin Laden’s death could be a good step in the direction toward peace and toward U.S. President Barack Obama’s plan to withdraw troops.

“The Taliban are upset about bin Laden’s death, particularly that the United States threw his body into the sea, which they consider un-Islamic and humiliating,” he said. “But they do not seem to be overly shattered.”