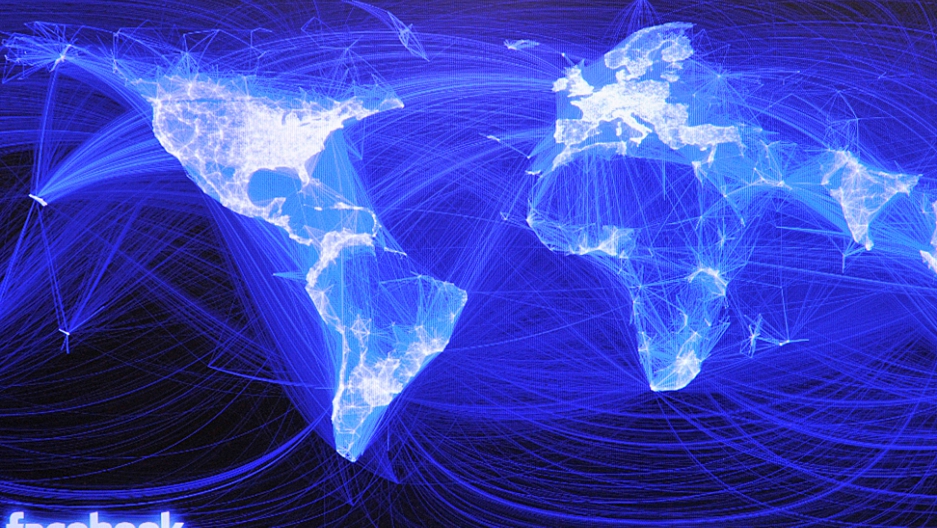 This map shows the density of Facebook friendships. The dark area north east of India is China, where Facebook is banned. Meanwhile, Renren, a Chinese version of the social networking site, is raising a fortune on Wall Street.
Credit: Karen Bleier
Share

Investors have gone wild for Renren. Its initial public offering raised $743 million on May 3 — valuing the company, which is not yet profitable, in excess of $5 billion.

That means Renren is worth more than 72 times its 2010 sales according to Bloomberg, a sharp premium over Facebook. So far, private investors who have bought shares of Facebook have paid about 25 times 2010 revenues.

Still, Wall Street wasn’t phased by the steep price. The following morning, its shares soared as much as 71 percent.

Renren’s astronomical price could mean a few things. One possibility is that investors think Renren has greater growth potential than Facebook. Another is that Facebook has been selling its shares for too little. Or the billions chasing Renren could signal irrational exuberance.

There’s reason to expect the latter. For all its promise, Renren appears to be a risky investment. Its rollout was steeped in controversy and murkiness, and its high price may have more to do with fad than fact.

Most worryingly, the company seems prone to exaggerating its accomplishments. In official investment documents filed with the Securities and Exchange Commission, it first stated that 131 million users had activated its service. Later, Renren knocked a cool 100 million off that number, disclosing that only 31 million logon to the service at least once a month, according to the Financial Times.

Either way, the site is still relatively small by network standards, and is clearly struggling with user engagement, a critical challenge on the internet. Facebook, in comparison, says that half its users visit daily, with some 250 million accessing the site via mobile devices.

Renren has also struggled in reporting exactly how quickly it is growing.

It initially stated that it added 7 million users in the first quarter of 2011. Executives later clarified that the number was really 5 million. That reduced its quarterly growth rate from 29 percent to 19 percent. Compare that to Facebook, which doubled in size, from 250 million in July 2009 to 500 million in July 2010.

Adding to the confusion, the head of Renren’s audit panel resigned just days before its stock listed. The executive, Derek Palaschuk, removed himself from Renren’s board after a research firm characterized the performance of Longtop Financial Technologies (NYSE: LFT), as “too good to be true.” In his day job, Palaschuk serves as Longtop’s chief financial officer.

One advantage that Renren has is that, for now, it doesn’t have to compete with Facebook, which is blocked in China. That means Renren is the biggest player in the world’s largest internet market, while the Palo Alto-based global behemoth is forced to watch from the sidelines. (Incidentally, Bloomberg Business Week questions the fairness of Renren tapping U.S. financial markets while Facebook is banned from China’s internet.)

Renren’s exclusivity in China may not last for long, however. Last year, Mark Zuckerberg “vacationed” in the country, and in April 2011 rumors emerged that Facebook was in discussions with leading Chinese search engine Baidu. In response, Facebook released a statement indicating that "Facebook is currently studying and learning about China, as part of evaluating any possible approaches that could benefit our users, developers and advertisers."

Renren does have some other advantages. Its revenues come not just from advertising, but also from games and from “a Groupon-type service layered on top of the social network,” according to TechCrunch. Despite the slippery reporting, TechCrunch also credits Renren as having “Highly competitive management, [with] social network experience.” It says CEO Joe Chen, a Stanford MBA, has “a reputation as a formidable and experienced player and a savvy deal maker.”

Still, why the rush to invest in a relatively small, unprofitable Chinese social network, that hasn't yet reached the critical mass that is so important to social network success? Renren doesn't dominate the Chinese internet like Facebook does elsewhere, with its ubiquitious "Like" buttons and Facebook connect signup features.

Who’s to say that in a few years, Renren might not end up as desirable as MySpace or Orkut, out-competed by one of the other Chinese social networking sites, or crushed by a forthcoming Facebook-Baidu creation?

Part of the reason is that investors are hankering to get their hands on social network stocks. For better or worse, Renren beat everyone else to the market.

But there also appears to be an enthusiasm that may seem familiar to anyone who was around in 1998: Chinese internet stocks are white hot. If you’d invested $1000 in Baidu on Jan. 1, 2009, for example, you’d now have more than $10,000; the stock is up more than 40-fold since it first listed in 2005. Similarly, by investing in the December 2010 initial public offering of Youku.com, China’s YouTube knock-off, you would have quadrupled your money in less than six months, even though Youku has lost $105 million since 2007.

But Baidu makes money, a handsome $4 billion in 2010, and it’s growing at a good clip. But that doesn’t mean other Chinese internet stocks will do the same.

Whatever happens to Renren, investors may want to keep a wary eye on the Winkelvoss twins, the strapping Harvard crew champs made famous by the movie The Social Network. The twins claim that Facebook founder Mark Zuckerberg stole their idea for the social networking site.

By many accounts, Renren is a Facebook clone. It launched in late 2005, just as Facebook was taking off on campuses across America. It originally called itself Xiaonei, which translates as "on campus network." Back then, it also featured the same trademark blue on its site.

The Winekelvosses extracted a settlement currently valued at $200 million from Zuckerberg. But that apparently isn’t enough. In April, they appealed for more. In the twisted logic of the privileged, if Renren ripped off Zuckerberg and Zuckerberg ripped off them, don’t they deserve some skin from the clone? As far-fetched as it sounds, wouldn’t the Winkelvi want to mine Renren as well?

Or maybe Zuckerberg deserves a piece of the action.