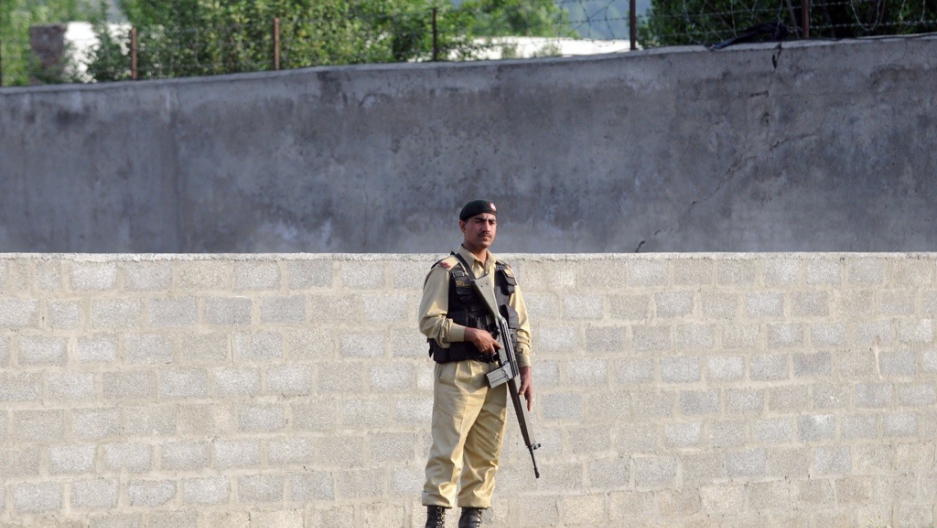 ISLAMABAD, Pakistan — Pakistani officials have told GlobalPost that the Pakistani army had full knowledge of the U.S. raid that led to the death of Osama bin Laden and that it played a larger role in the operation than previously acknowledged.

The statements run counter to the public position taken by officials in both Pakistan and the United States who have so far downplayed the role Pakistan’s military and intelligence community had in the attack, saying that it was limited to a small amount of information sharing.

One senior military official, who asked not to be named because he is not permitted to speak to the press, said that Pakistani army troops were in fact providing backup support when the United States began its operations inside the compound where bin Laden had been staying, including sealing off the neighborhood where the compound was located.

Officials interviewed scoffed at the idea that Pakistan could have been unaware of the American operation.

“It’s a no-fly zone,” said a Pakistani intelligence official, referring to the area around bin Laden’s mansion and the nearby military compound. “It is impossible for U.S. helicopters to fly over there without our knowledge and permission.”

A Pakistan Air Force official, speaking on the condition of anonymity, rejected reports that U.S. special forces had jammed Pakistan’s radar system in order to circumvent the no-fly zone.

“This is totally untrue. Neither our radars were jammed nor was any scrambling of any air force plane recorded,” the official said, referring to the practice of launching aircraft in the event that the airspace has been breached. Some observers said the helicopters may have been equipped with stealth technology, but that has not been confirmed.

Residents in the area confirmed that the Pakistan army appeared to have at least some knowledge of the operation well before it began. Several residents said that two hours before the United States launched its attack, Pakistani army personnel ordered them to switch off their lights inside and outside their homes and remain indoors until further notice.

“The army personnel cordoned off the entire area long before we heard the sounds of helicopters hovering over the area,” said Zulfikar Ahmed, who lives in the Abbottabad neighborhood of Bilal Town, where bin Laden’s compound is located. Locals interviewed by the BBC and several other local and international media outlets made similar statements.

Several meetings leading up to the attack, when viewed in sum, also indicate that Pakistan might have known of the operation beforehand.

“Gen. David Petraeus paid an extraordinary visit to Islamabad on April 25,” said a senior military official said. The official said Petraeus held a one-on-one meeting with Gen. Ashfaq Parvez Kayani, Pakistan’s army chief of staff, in which they discussed the details of the operation.

The next day, Pakistan’s top military body — the Joint Chiefs of Staff Committee — held its quarterly session, which was attended by Lt. Gen. Ahmed Shuja Pasha, the country's intelligence chief, who is not a regular member of the body. Pasha had visited the United States to meet with the head of the Central Intelligence Agency, Leon Panetta, on April 11.

Analysts in Pakistan said that the Pakistani government likely wanted to hide its role in the operation to avoid a backlash from the public, which has grown increasingly impatient with the United States and the growing presence of the Central Intelligence Agency inside their country.

But now international pressure is growing on the military to answer not only for its lack of support in the raid but also for not knowing about bin Laden’s hideout, which was located close to the Pakistan Military Academy. Some in the military — which has long been one of the more respected institutions in the country — are looking to correct the record.

U.S. President Barack Obama has sought to diffuse the tension since the raid took place, calling Pakistan an important ally and highlighting the intelligence sharing between the two countries that helped lead the United States to bin Laden’s compound.

"It’s important to note that our counterterrorism cooperation with Pakistan helped lead us to bin Laden and the compound where he was hiding," the president said.

When contacted by GlobalPost about this latest information, the White House press office said all details about the operation have already been released.

White House spokesman Jay Carney on Wednesday said the United States’ relationship with Pakistan was “complicated,” but that it was important to maintain.

“The fight is not done, and we look forward to cooperating with Pakistan in the future,” he said at a White House press briefing. “As others have said, more terrorists have been killed on Pakistani soil than probably any other country. And the cooperation we’ve received from Pakistan has been very useful in that regard.”

The European Union on Thursday also came to the defense of Pakistan, calling the country an “important partner,” echoing similar statements from officials at NATO that were made on Wednesday.

Experts and analysts here in Islamabad said that the Pakistani government itself, which is concerned about appearing overly friendly with the United States and angering its citizens, is likely encouraging the United States to downplay Pakistan’s involvement in finding bin Laden and the eventual operation against him.

In fact, analysts said, the Pakistani government has long been trying to compose a storyline that it is actively working against the United States — an effort that is aimed at keeping the country’s population from rising up against the political leadership. Pakistanis have grown tired of U.S. involvement in its affairs in the last decade and ongoing drone attacks in its northern tribal belt that have killed numerous civilians.

Pakistani Foreign Minister Salman Bashir, for example, told reporters Thursday that the Pakistani military first learned about the operation when a U.S. helicopter crashed at the start of the attack.

“Pakistan’s civilian and military leadership does not want to be the center of hatred, not only within Pakistan … but also in the Arab world,” where it believes elements of the population still support bin Laden, said Najam Sethi, a political analyst in Pakistan.

But many here said this strategy could, in the end, hurt the country by making it appear more culpable than it actually is — a reality that is already beginning to take shape as the American media, and some members of Congress, asks why Pakistan hasn’t been more helpful.

In the wake of all of the criticism, some here are now calling on Pakistan’s leaders to be more forthcoming about their cooperation with the United States, especially in regard to Sunday’s raid.

“If Pakistan or U.S. officials do not publicize the cooperation between the two sides in the operation against bin Laden, Pakistan will be in serious trouble on the diplomatic front,” Sethi said.

Salim Safi, a security analyst based in Peshawar, said it seemed clear that there had been a significant amount of cooperation between the two sides — a reality that should be made public, even if Pakistani officials think it might hurt them politically in the short-term.

“The Pakistani government and the military establishment must not hide the facts from their own people,” he said. “They must come forward with the truth.”