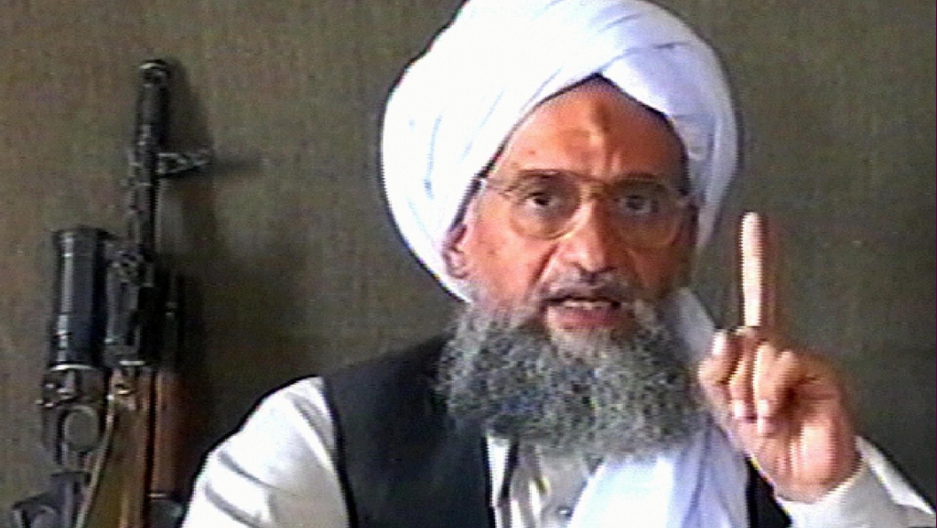 A TV grab from the Qatar-based Al-Jazeera news channel dated June17, 2005, showing Al Qaeda No. 2 Ayman al-Zawahiri delivering a speech at an undisclosed location with a machine gun next to him.
Credit: Al Jazeera
Share

And now as a team of more than 100 CIA analysts pore over this crucial body of evidence in a warehouse-sized forensic investigation lab at Langley, they are scouring for any clues that might help them vector in on the No. 1 “High Value Target,” or “HVT,” to use the parlance of the agency.

That is, Ayman al Zawahiri.

The Egyptian-born physician doesn’t have the same global branding as Osama bin Laden, but his name will soon be known the world over as he is the likely successor to bin Laden, according to high-level national security officials both current and retired.

And what is known so far about Zawahiri is nothing short of bone-chilling. He is a cold, efficient operator who does not have bin Laden’s ability to inspire. He is described as arrogant and egotistical and does not have the perceived piety that many supporters see in bin Laden.

But the clear goal he has been actively pursuing is to carry out an attack on America using a Weapon of Mass Destruction (WMD) or, as a so-called “dirty bomb” is often referred to, a Weapon of Mass Effect (WME).

Based on interviews with a half dozen counterterrorism officials and experts with deep knowledge of Zawahiri, a portrait emerges of a leader who has for at least three years been quietly and effectively building the groundwork — theological and scientific — for Al Qaeda to complete an attack using WMD.

In 2008, Zawahiri wrote a book which presented his own theological grounding for the deployment of a nuclear weapon in America, and Al Qaeda’s sense of the religious justification for killing as many people as possible.

The book is a glimpse inside the religious fervor of a leader who is in many ways more ambitious than bin Laden was in trying to produce a “spectacular” terrorist event that will exceed the death and destruction caused on Sept. 11.

Rolf Mowatt-Larssen was the former head of the CIA’s WMD and terrorism efforts. He has focused on Zawahiri and specifically Zawahiri's intention to lead Al Qaeda to explode a crude nuclear device often referred to as a “dirty bomb.”

“He is more operational than Osama bin Laden and the belief is that he would be personally directing the action in attempting to deliver WMD or the next spectacular,” said Mowatt-Larrsen, who is now a Senior Fellow at Harvard University’s Belfer Center for Science and International Affairs.

Michael Scheur, who headed the CIA’s bin Laden unit from 1996 to 1999 and is the author of a new book on bin Laden, says that Zawahiri has some flaws which will increasingly become apparent and which could serve to create divisions in Al Qaeda.

“He's not a man I think who can lead the organization over the longterm. He's a very avuncular fellow, very sharp-edged, very much an Egyptian who lets other people know that the Egyptians are an ancient culture and that kind of thing. So he's kind of an abrasive man,” said Scheuer.

That’s a perception that is shared by those who know Zawahiri personally, such as Montasser el-Zayat, an Egyptian lawyer.

El-Zayat’s former clients include Zawahiri and a long list of other Egyptian Islamic militants who were routinely rounded up and tortured in the 1980s and 1990s under the now-toppled regime of Hosni Mubarak.

El-Zayat wrote a short book that is not widely published, entitled “Amyan al-Zawahiri as I Knew Him.” In the book, he is deeply critical of Zawahiri and plays up his ruthless and stubborn side.

In a recent conversation in Egypt, el-Zayat said of Zawahiri: “He is arrogant. He always thinks he’s right … And in the end that is his weakness.”

In the 1980s and 1990s, Zawahiri was focused locally on the regime of Mubarak and on orchestrating plans to carry out terrorist attacks that would cripple the tourism industry in Egypt — essentially, he was focused on doing anything possible to take down the Egyptian government.

But around 1993, Zawahiri began to join forces with bin Laden in Sudan at a time when bin Laden was encouraging local Islamic militants to come together to direct their ire, not against the tryany of U.S.-backed regimes, but against America itself.

Bin Laden re-defined the struggle for old-school Islamic militants like Zawahiri and recast it as a “jihad,” or “holy war,” against America. Zawahiri has been an eager advocate of the ideology ever since.

But he has also sought to take the mission to a more apocalyptic level than bin Laden by carrying out an attack with WMD. That right now is the greatest fear of the national security team working to secure his capture.

As one senior national security official put it, “There’s an hour glass running and we need to use the new information we have to track him down.”

A senior administration official said at a press briefing Monday, “Bin Laden was Al Qaeda’s only ... commander in its 22-year history, and was largely responsible for the organization’s mystique, its attraction among violent jihadists, and its focus on America as a terrorist target.

"As the only Al Qaeda leader whose authority was universally respected, he also maintained his cohesion, and his likely successor, Ayman al-Zawahiri, is far less charismatic and not as well respected within the organization, according to comments from several captured Al Qaeda leaders. He probably will have difficulty maintaining the loyalty of bin Laden’s largely Gulf Arab followers.

“Although Al Qaeda may not fragment immediately, the loss of bin Laden puts the group on a path of decline that will be difficult to reverse,” he said.

The senior official added that Zawahiri, as an Egyptian, is particularly vulnerable to a perception that many youth in the Arab world are putting new faith in challenging authority through social networking more than the murderous theology of Al Qaeda.

“It is most fitting that bin Laden’s death comes at a time of great movement towards freedom and democracy that is sweeping the Arab world. He stood in direct opposition to what the greatest men and women throughout the Middle East and North Africa are risking their lives for: individual rights and human dignity,” the official said.