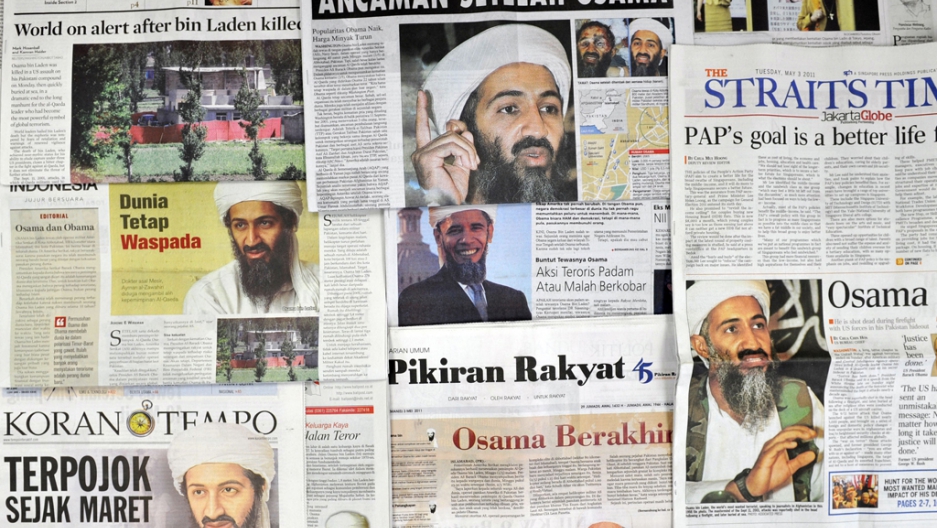 The signs posted outside the headquarters of the Islamic Defenders Front (FPI) in Jakarta played on the roles of the U.S. president and the world’s most wanted militant.

The FPI are known for such antics. Considered thugs by many Indonesians, they’ve waged attacks against nightclubs and American establishments here, and bin Laden’s death comes as fodder for their anti-Western tirades.

Wednesday’s gathering was marketed as a mass prayer for bin Laden, the Al Qaeda leader shot dead during a U.S. military raid on Sunday. But the fiery sermons also raised doubts about the killing of the man they call a hero — and now a martyr.

Many say they don’t believe bin Laden is dead and warn the “infidels” who are spreading the message to check their facts.

“The message coming from the White House and the Pakistani Taliban is different,” said Mohammed Iqbar, a 30-year-old member of FPI.

Even if it is true, Iqbar says the news of bin Laden’s death has not shaken his devotion to what he called jihad. “Osama bin Laden is a big hero to the Muslim world because he fought against communism and imperialism. It was a spirit to us to fight like Osama.”

The majority of Indonesian Muslims disagree with Iqbar's characterization of bin Laden as a hero. On the streets of Jakarta people said bin Laden’s death is positive. They hope it will make the world safer and restore the image if Islam as a religion of peace rather than violence.

Some security analysts have cautioned that acts of retaliation are possible, and the government has stepped up security as Jakarta prepares for a number of high-level international summits this week. But Iqbar says the FPI will not retaliate.

“We will not make revenge, but we will continue to fight for our cause,” he said, referring to the FPI’s drive to implement Islamic law in Indonesia, a politically secular country with the world’s largest Muslim population.

Most of the men in the crowd on Wednesday evening were youths or young boys. They echoed the older leaders’ calls of “Allah Akbar” when required. But when the gathering was over, they strolled the streets, shopping for white trousers and prayer caps.

In many ways these hardliners seem anything but. They run a good public relations campaign and draw many to their rallies. But they are a fickle group that accounts for a fraction of the population in a country whose syncretic form of Islam is often highlighted for its moderation.

Over the past year the FPI has been linked to several sectarian clashes, including one that ended in the deaths of three members of Ahmadiyah, a minority Muslim sect that some Islamists consider deviant.

Analysts worry that groups like the FPI are fomenting religious intolerance that could lead to more violence.

A number of bombings tied to Jemaah Islamiyah, Southeast Asia’s Al Qaeda-linked terror group, have rocked Indonesia over the past decade. Most have focused on hotel chains, such as the Marriott, and Western embassies. But more recent attacks have turned toward minority religious groups and police, possibly in revenge for the scores of arrests of alleged militants Indonesia’s counterterrorism forces have made since last year.

The shift in radical activity also indicates that Indonesia’s links to Al Qaeda have weakened, and analysts doubt extremists’ ability to organize reprisals. Speaking on the sidelines of a U.S.-led investor conference Wednesday, the U.S. ambassador to Indonesia, Scott Marciel, said a revenge attack was unlikely.

Bin Laden’s death comes shortly after the arrest of Indonesian militant Umar Patek, who had links to Jemaah Islamiyah and a radical group in the Philippines, the Abu Sayyaf. The Associated Press reported that his arrest took place in the same town where bin Laden was found.

As details of the militant’s death continue to surface, officials here say they must remain vigilant.

At FPI headquarters, “America the infidel” rings out.

“They say they believe in human rights, but they don’t stand by what they say,” said Iqbar, who quit his job at Starbucks because he says he could no longer support a company from America, which had killed his Muslim brothers in Afghanistan.