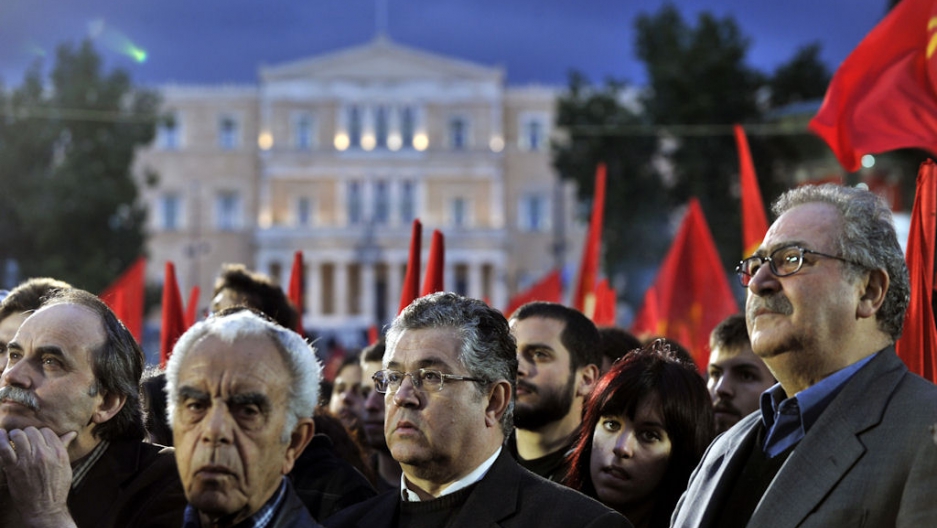 ATHENS, Greece ― This time last year the European Union did the unthinkable: It ripped up its single-currency rules and with the help of the International Monetary Fund (IMF), rescued its poorest member, Greece, with a cool $148 billion bailout. The sun-kissed nation was put on life support, sheltered from international markets and ordered to follow a strict austerity regimen to rehabilitate its failing finances.

A year later, two more EU members ― Ireland and Portugal ― have received similar bailouts, and Greece is back in the headlines. This time, European officials must contemplate something even more unthinkable: writing off a chunk of Greece’s seemingly insurmountable debt.

The technical term for the move is debt restructuring. Effectively Greece the country wants the same break thousands of distressed American homeowners are seeking: new loan terms for a fresh start.

Today European and IMF experts kicked off a week-long review of Greece’s austerity program, assessing a patchwork of measures designed to raise 23 billion euros ($34 billion) through 2013. However ambitious the blueprint may seem, it’s unlikely that the inspectors will give Greece the glowing reviews it won last year.

In a country where disobedience and procrastination are national traits, Greece’s creditors may have to crack the whip to avoid a debt restructuring, which could be disastrous for the rest of the euro zone.

European banks stuck with vaults of Greek bonds would be devastated, recording losses of between 13 billion to 41 billion euros ($19 billion to $61 billion), according to Goldman Sachs analysts. Since Spanish banks are exposed to Greek debt, a Greek restructuring could further trouble that much larger economy. It’s unclear whether the EU could afford to bailout Spain.

Even so, European officials aren’t ruling out some form of debt restructuring. In recent weeks, they’ve broken the taboo on talking about it by going public with grim assessments.

Last week, as news of Greece’s 2010 revised deficit ― a percentage point plus higher than the 9.4 forecast ― riled international markets, economists across the continent discussed the possibility of a Greek debt makeover.

“I don’t think that Greece will succeed in this consolidation strategy in the future,” said Lars Feld who sits on the German government’s economic advisory council. “Greece should restructure sooner than later.”

Indeed, “we’re at a make or break point,” said Miranda Xafa, a leading Greek financial guru and former member of the IMF’s executive board. “The government’s efforts to raise tax rates on incomes and property to punitive levels is deepening the recession and inhibiting the recovery of investment.”

Like Ireland and Portugal, Greece is insolvent. And while the socialist government last year embarked on sweeping budget cuts, slashing the deficit by a whopping 5 percentage points, raising retirement ages, scrapping holiday pay and unjustified entitlements, progress this year has been anemic.

What’s wrong? For starters, crisis fatigue. The economy has contracted much more than expected. Unemployment has surged to record levels (above 15 percent), and the sight of money-strapped dishevelment has spilled across the nation with roguish shows of protest against politicians and a rash of civil disobedience campaigns that even have doctors preventing patients from paying fees at state hospitals. Most worrying, though, the government has lost its chutzpah.

“Time is running out,“ said a leading economist in Athens, requesting anonymity because of his proximity to state financial planners. “If Greece doesn’t jump on the bandwagon again and jump start the economy, it won’t be able to convince international investors that it means business.”

There are many areas where Greece could do better. Tax collection has been ailing. Lofty plans to rake in $60 billion from the sale of state companies and property have yet to begin. Much-vaunted labor reforms intended to bust monopolies and open up about 150 cosseted professions have been watered down significantly.

What’s more, as the country’s private sector continues to shed more than 250,000 jobs to cope with the crisis, Greece’s 1 million-strong public sector remains intact, untouched by a ruling party that nurtured a system of political clientelism for decades.

“It’s outrageous,” says Stefanos Manos, a former finance minister. “Forty percent of that force is redundant. That in itself is an enormous spending cut that could generate a timid but encouraging primary surplus.”

That in turn, he explains, would ease skittish investors and allow Greece to tap into international markets next year, boosting its chances of servicing its massive debt, expected to reach 160 percent of the country’s economic output by 2013. That’s when the EU/IMF bailout funds dry up.

“If tough measures like these do not take force,” warned Manos, “then the alternative is that Greece will not be able to avoid a debt restructuring of some sort. We’ll be bust.”

Until then, Greece’s paymasters may use a bit of leverage: freezing 15 billion euros ($22 billion) in funds to Athens ― the fifth tranche of the $148 billion bailout.

The cash-strapped country faces redemption payments of 9.6 billion euros ($14.3 billion) next month and a similar amount in July. Disbursements must be unanimously approved by the EU and recent elections in Finland saw 20 percent of votes going to two opposition parties that are against financial assistance to neighboring countries.

“Europe has managed this crisis altogether badly,” said Yanis Varoufakis, an economist with Athens University. “It’s invested, however, too much in this experiment and it’s highly unlikely to let Greece, or for that matter any other troubled economy, sink.”

Not yet, at least.