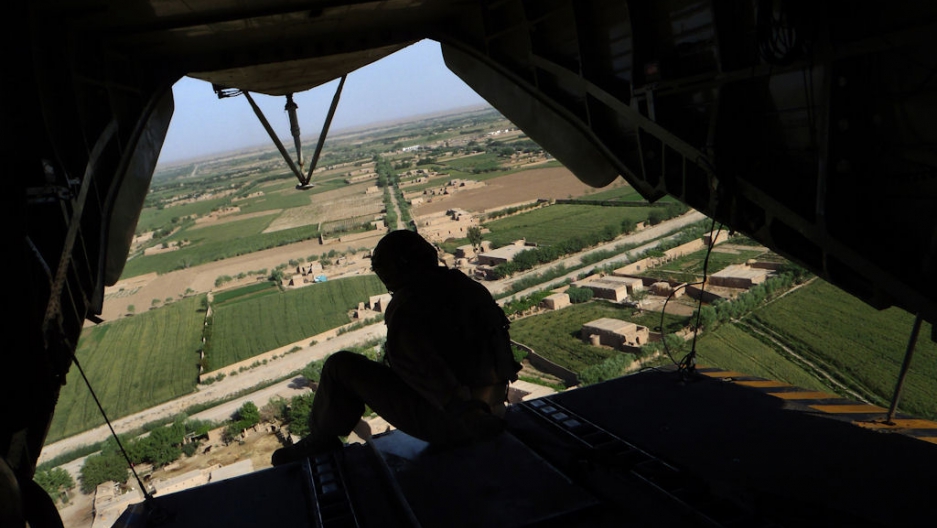 A member of the U.S. Marine helicopter CH 53 crew sits at the back door as it flies over Marjah district in Helmand Province, Afghanistan, on May 3, 2011.
Credit: Bay Ismoyo
Share

But Sunday’s headlines from Pakistan brought reality into focus.

America’s relentless pursuit of Osama bin Laden shows the stratospheric price of security these days. And as Europeans slash their own defense budgets, no one else is ready to share the bill.

That London column, by Philip Stephens in the Financial Times, concluded: “As I said, it’s time the Yanks went home. Then we Europeans can grow up.”

Yet even massive help from the European Union won’t be enough. Beyond combat troops and hardware, keeping order demands coalition peacekeeping, intelligence sharing and diplomacy from regional powers elsewhere.

Because national interests inevitably shape strategic decisions, no one country can police a multifaceted planet.

Since the 1960s, the Pentagon’s costly wars have cut deeply into the resources it needs to keep the peace. Some have increased dangers they were meant to diminish.

From Vietnam to Iraq and Afghanistan, its military campaigns have been more about U.S. foreign policy than defense against attack or the protection of borders.

The first Gulf War, an exception, drove Saddam Hussein out of Kuwait. But U.S. forces fought as part of a broad-based coalition.

Today, prospects are slim for the sort of global conflict that the West feared during Evil Empire days.

China, arming fast, could be a redoubtable superpower foe. Yet Beijing is far more likely to pursue national interests by economic pressure and hardball statecraft.

Instead, threats come from diehard tyrants, shadowy terror and local brushfires. Security depends on small agile forces ready to act fast, not on musclebound might.

Britain and France excel at the down and dirty. Both set free most of their colonies in the 1960s and trained tough commando units to quell localized mayhem. During the Bosnian War, elite British units and the French Foreign Legion provided a backbone for other U.N. contingents.

As the Obama administration tread carefully on Libya to avoid political flak at home, Britain and France took the lead. But Britain has cut back drastically on defense investment. It scrapped its short-takeoff Harrier jets and the Ark Royal, leaving the Royal Navy with no aircraft carrier for a decade. Nimrod warplanes, ideal for a Libya-type scenario, were junked early this year.

In Africa and pockets of mayhem in the Middle East and Asia, the grunt work is now left mainly to France.

After the Ivory Coast imploded in 2006, I found a platoon of French commandos deep in the bush, with neither body armor nor helmets, lounging in range of rebel guns.

Shouldn’t you be a little worried? I asked the lieutenant. He replied, “They know what we have over that hill.”

On a later trip, I nearly ran over two French soldiers at a jungle roadblock I did not see in time. Unperturbed, they gave me a thorough briefing.

In April, French troops hung back as Laurent Gbagbo fought Alassane Ouattara to a standstill. Then they swept in to turn the tide and take 700 foreigners to safety.

New powers can play significant roles. The Indian Navy humbled Somali pirates who confounded Western warships. Brazil has no one for its well-equipped military to fight.

However new strategies take shape, no one is likely to come close to replacing America’s nuclear-tipped weaponry, space-age shields and electronic surveillance.

The European Union, richer and more populous than the United States, has the wherewithal. But its 27 disparate members are often at odds over defense. Their armed forces function independently.

Ideally, U.S. and European generals could cooperate more closely to share the burden. But the Pentagon is reluctant to share sensitive information, fearful of leaks.

For defense strategists, narrowing this breach offers the best hope for stabilizing an unruly world. Europe could add more muscle. The United States could share command and control. Regional powers could weigh in substantially.

The Americans finally hunted down bin Laden, and they did it essentially on their own. But the question hangs: Could they have done it sooner, with a greater impact on global terror, with a little help from their friends?