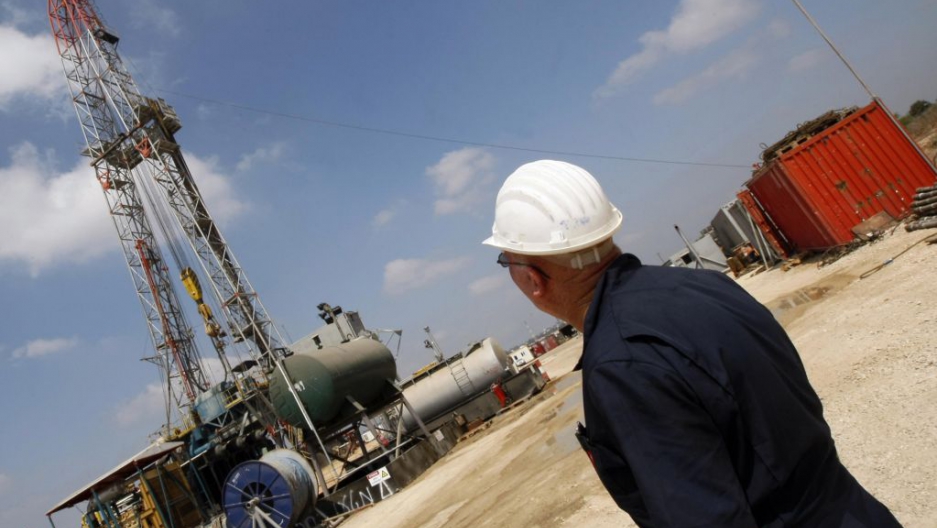 CAESAREA, Israel — John Brown first came to Israel in 1983 with visions of striking oil. He didn’t care that geologists had written off that possibility as absurd.

Already a successful manufacturing executive, Brown was a recently born-again Christian when he boarded a flight for Jerusalem. The words of Christian evangelist Jim Spillman were fresh in his mind: “The Bible tells us that God has left us petroleum in Israel.”

“I read the scriptures and it seemed to be pretty clear to me that there was evidence of hydrocarbons in Israel,” said Brown, who is now 71 years old.

Oil industry insiders mocked Brown for years, laughing that he had picked the only country in the Middle East without any oil.

It turned out, of course, that Brown was right all along.

Almost 30 years later, he is the founder of Texas-based, NASDAQ-traded Zion Oil and Gas. The company, founded in 2000, operates exploratory wells in Israel. Its stock price has been boosted by a string of discoveries beginning in 2009 that confirm some of what Brown had been saying from the start.

“Everybody accepts now that there are large deposits of hydrocarbons in and around Israel,” said Richard Rinberg, an Orthodox Jew who has served as Zion’s CEO since 2005. “And everybody’s drawn to the area now — the hot money is coming in. The geology confirms the theology.”

The United States Geological Survey announced last year that the Mediterranean waters off Israel’s coast contain 1.7 billion barrels of extractable petroleum and 122 trillion cubic feet of natural gas — enough to radically transform Israel’s geopolitical fortune this century. The country’s longstanding desire for energy independence has only been accelerated by the recent instability in Egypt, which supplies 40 percent of Israel’s natural gas.

Zion Oil’s board of directors, which includes a former Chevron executive and the chairman of the Railroad Commission of Texas, has attempted to balance their religious motivations with the exacting standards of business and science.

They all agree that central to their mission is helping Israel become more stable and energy independent.

“As in a great book, you can come at it from any direction you wish,” said Rinberg, who moved his family to Israel from England in 1996. “John Brown came from Biblical understanding. To run a corporation in the 21st century, you need to do scientific investigation and use high-tech techniques.”

But the company – which has the motto: “A special company ... A special task ... A special country” – is still waiting for its big find. Much larger companies, meanwhile, are enjoying huge success. The Texas-based multinational, Noble Energy, is preparing to extract trillions of cubic feet of natural gas from its recently discovered Tamar and Leviathan fields near Haifa.

Tamar alone is expected to meet Israel’s own gas needs for at least three decades, while the much larger Leviathan could make Israel an exporter for the first time in its history as soon as next year. Tax revenues from the gas could amount to $500 million a year.

“Frankly the only thing we’re missing is a discovery to announce,” Rinberg said, expressing an optimism that’s become one of Zion Oil’s trademarks.

The state of affairs in Israel has changed drastically since 2003, when Rinberg first got involved in Zion as a venture capitalist.

“I found the idea of oil in Israel compelling on a number of levels, both business and spiritual,” Rinberg said. “Before the Tamar discovery in January 2009, when I would tell people what I was doing, it was not uncommon for them to burst out laughing.”

These days, several of Zion’s competitors are laughing with delight. Just south of where Zion’s drilling rights end, Jerusalem-based Givot Olam discovered one of the country’s largest onshore oil fields, Meged, in 2004. Producing since last year, Meged contains an estimated 1.5 billion barrels of oil at the “Megged 5” well a few miles east of Tel Aviv.

“For many years we drilled wells without success,” said Tuvia Luskin, Givot’s founder. “Megged 5 is an event like the giving of the Torah.”

If Brown is envious of Luskin’s good fortune, he doesn’t show it.

“He had the exact same scriptures I had,” Brown said. “Now he’s produced the oil and I think we’re up next.”

Zion focuses its operations along a stretch of land between Caesarea and Haifa in northern Israel. Brown selected it after reading the Spillman’s 1981 tract, “The Great Treasure Hunt.”

It prophesized huge quantities of petroleum under that land based on a passage from Deuteronomy, which reads: "Most blessed of sons be Asher. Let him be favored by his brothers and let him dip his foot in oil at the head of Joseph."

Brown said the scripture has guided him since he first visited Israel in 1983.

“I Iooked at a Biblical map, and it looked like there was an outline of a head,” he said. “It was perfectly clear to me that was where the oil was. And that’s where we are today.”

Many Biblical scholars say the scripture doesn’t reference petroleum at all, but rather olive oil, still abundantly produced in the region.

Brown is not very concerned about the distinction, even if Zion’s decade-long endeavor has yet to produce any petroleum.

“There’s no way I’m wavering,” he said. “In evangelical jargon, what I am is a faith guy and I act on it.”

Israel’s natural resources inspire a religious fervor even among secular adherents, domestically and around the world.

“This is a national treasure,” said Alon Ben-Meir, a professor at New York University and The New School, in reference to Israel’s natural gas. “It belongs to the people, not to anyone else.”

Israel, Lebanon, Palestine, Cyprus and Northern Cyprus can all lay claim to some of the natural gas within their respective maritime borders, which were never clearly defined. Israel is working with Cyprus but is locked in a bitter dispute with Lebanon, which is also banking on the newly-discovered gas fields to relieve its energy woes and pad government accounts.

“Lebanon is laying claim only now that great wealth has been discovered,” Rinberg said. “Now that we’ve done the work, they say, ‘Oh, you’ve stolen it from us.’”
In its ongoing quest, Zion Oil has begun operating one of the deepest exploratory wells on Israeli soil.

“People ask about Texas and the Middle East where you have loads of oil near the surface,” Rinberg said. “In Israel, we believe the oil is a lot deeper.”

Brown said he is enjoying the process of exploration and has no doubt that Zion will eventually meet with success.

“It was God’s decision that we come here,” Brown said. “If it were just economic, I wouldn’t be here, I’d be in Texas where all the oil is. We’re here to help Israel.”