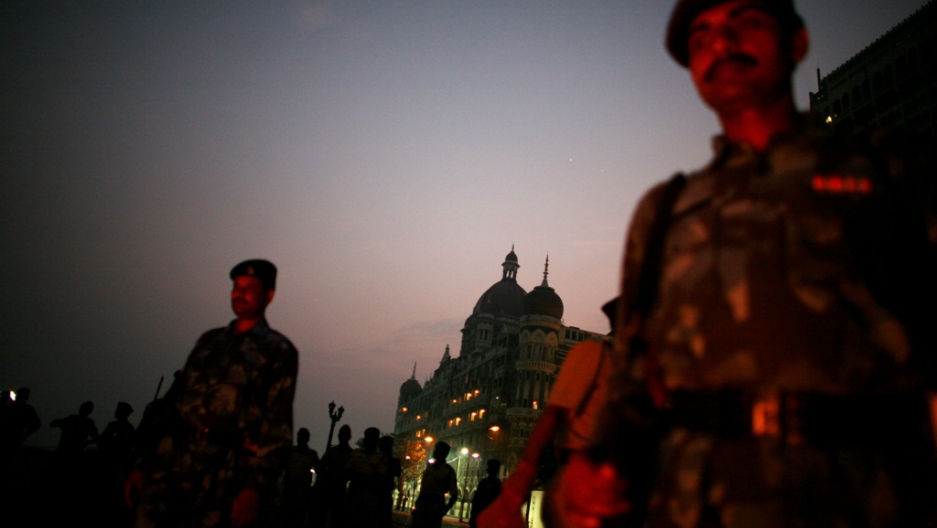 "We take note with grave concern that part of the statement in which President Obama said that the fire fight in which Osama Bin Laden was killed took place in Abbotabad 'deep inside Pakistan'," Home Minister P. Chidambaram said in an official statement Monday. "This fact underlines our concern that terrorists belonging to different organizations find sanctuary in Pakistan."

Despite that grave concern, however, some observers on both sides of the border expressed guarded optimism that the death of bin Laden would force a change in tactics by Pakistan's military and intelligence establishment.

"The elimination of bin Laden by U.S. special forces in Abbottabad, just a few tens of miles from Islamabad and home to a big military academy, is a huge embarrassment for Pakistan's military and civil establishment," said Pervez Hoodbhoy, a physics professor at Islamabad's Quaid-e-Azam University who is also an outspoken commentator on Pakistani politics.

"For over a decade they had, on every occasion, strenuously denied his presence in Pakistan. But how could the world's most wanted man have lived in luxury for so many years, out of sight of our powerful and ubiquitous intelligence services? This may be a transformational moment: it may no longer be possible to continue with the Pakistani policy of verbally condemning jihadism while tacitly supporting it," Hoodbhoy added.

"Let's assume the Pakistanis knew [where he was hiding] but they thought Osama was a kind of an asset," said PR Chari, a research professor at the New Delhi-based Institute for Peace and Conflict Studies. "So long as Osama is alive, their own influence with the Americans was going to last. There will be a certain diminishing of their influence on the U.S. after Osama is dead. As far as Pakistan is concerned, it's a serious blow to the way they were playing the game."

Meanwhile, India's official reaction hinted that New Delhi hopes to use what it considers proof of Pakistan's duplicity in the war on terror to drive a wedge between Washington and Islamabad. It also suggested that India aims to leverage suspicions that Pakistan was hiding bin Laden to garner more diplomatic support for its own fight to get justice for the victims of the November 26, 2008 terrorist attacks on Mumbai — here known as 26/11 in an obvious allusion to the Sept. 11 attack on the World Trade Center.

"We believe that the perpetrators of the Mumbai terror attack, including the controllers and handlers of the terrorists who actually carried out the attack, continue to be sheltered in Pakistan," Chidambaram reiterated in his statement on Osama's death. "We once again call upon the Government of Pakistan to arrest the persons whose names have been handed over to the Interior Minister of Pakistan as well as provide voice samples of certain persons who are suspected to be among the controllers and handlers of the terrorists."

Coming in the wake of Wikileaks revelations that U.S. diplomats considered Pakistan's spy agency, the Directorate for Inter-Services Intelligence (ISI) a terrorist group, the assault, and, more importantly, the location of bin Laden's stronghold, prompted Indian speculation about whether the ISI, the military and Pakistan's civilian government aided the U.S. in finding and killing bin Laden. As a representative report in the Times of India put it, "Taken together with President Obama's pointed 'thank you' to President Zardari and leaving out any mention of Pakistani forces' involvement, it would seem that Washington believes that Pakistan's military intelligence establishment, including the ISI, was sheltering bin Laden."

But even as journalists struggled to reconcile President Obama's insistence that the successful assault on bin Laden's compound stemmed from America's "counterterrorism cooperation with Pakistan" with the fact that the world's most wanted terrorist was living only a few miles from Islamabad on the doorstep of a prominent Pakistani military academy, former diplomats and other experts on India-Pakistan relations warned that the intelligence coup that President Obama termed "the most significant achievement to date in our nation’s effort to defeat al Qaeda" will not necessarily be good news for India.

The reason: Renewed anger against America may further weaken Pakistan's civilian authorities, and an embarrassed Pakistani military may well turn to India to shore up its reputation.

"This is not a moment for India to gloat over. It will have to put all its dexterity to work to ensure that blowback does not take place," said former Indian Air Vice Marshal Kapil Kak. "The Pakistani military and ISI will increasingly be under pressure [from terrorist groups operating in Pakistan], as they are their creation, and now they are being destroyed by the Americans."

Indeed, though he said the killing of bin Laden vindicates India's long-held position that Pakistan continued to harbor and support terrorist groups even as it claimed to be cooperating with the U.S.-led war on terror, former Indian foreign secretary Lalit Mansingh argued that this confirmation will have little practical impact on diplomatic relations. The U.S. had already accepted India's contention and had itself taken up the issue with Pakistan, he said. But despite taking a hard line, America was unable to extort much in the way of concessions from Islamabad, because the U.S. military still needs logistical support from Pakistan to keep supplies flowing to its troops in Afghanistan.

"What we have to look for is how they're going to manage the fallout, because the fallout is going to be quite adverse on Washington-Islamabad relations, and it will certainly will have some effect on what's going on in Afghanistan," said Mansingh, who was also formerly India's ambassador to the U.S.