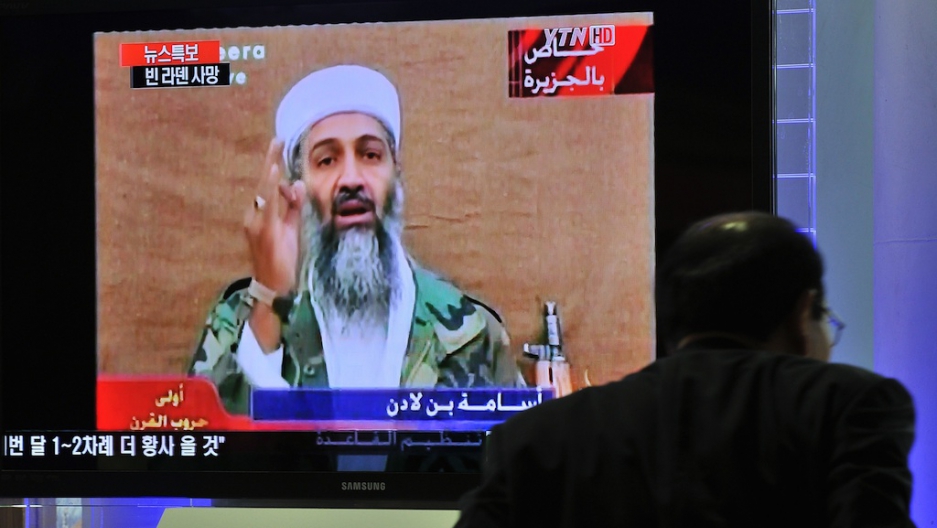 A pedestrian walks past a TV news report about the killing of Osama Bin Laden, at a railway station in Seoul on May 2, 2011.
Credit: Jung Yeon-Je
Share

Acting on intelligence painstakingly gathered since August, U.S. attack helicopters crossed from Afghanistan into Pakistan on Sunday and inserted a Navy SEALs unit known as “Team Six.” Within an hour, the legendary, elite unit had surrounded a high-walled compound and shot the mastermind of the Sept. 11 attacks.

Inside the labyrinth of the compound, which was located about 20 miles north of Islamabad and not far from a Pakistani military training facility, the SEALs unit came face to face with bin Laden and in an intense fire fight, the Al Qaeda leader was shot in the head and killed.

The unit credited with the assault on the compound is a “Tier One” special operations counterterrorism unit that is highly secretive and exists outside the traditional military hierarchy. They are officially named the U.S. Naval Special Warfare Development Group, but more informally referred to by their former name, which is “Team Six.”

Based on interviews with two national security sources, a picture is emerging of a daring and stunningly successful military operation that finally brought bin Laden to justice nearly 10 years after the attacks on the World Trade Center and the Pentagon.

Those sources say that the critical break in the case came when Al Qaeda fighters detained at Guatanamo produced information about a courier who carried messages to Bin Laden. That piece of information led to locating the compound in which bin Laden was staying.

“The death of bin Laden marks the most significant victory to date in our effort to defeat Al Qaeda,” said U.S. President Barack Obama last night, speaking from the White House.

But Obama and national security officials were quick to warn that the struggle against terrorism is far from over and that Al Qaeda will continue to try to carry out its self-declared war against America.

“His death does not mark the end of our effort … We must and we will remain vigilant at home and abroad,” Obama said.

One national security source said that in fact the killing of bin Laden could open up intelligence avenues that Obama’s national security team hopes will allow them to target other senior leaders of Al Qaeda. The focus would be the Egyptian Ayman al Zawahiri who was bin Laden’s deputy and is now presumed to be the new leader of Al Qaeda, a movement believed to have inspired militant cells in Yemen, Somalia, the Philippines, Indonesia and dozens of other predominantly Muslim countries around the world. Meanwhile, the source added that there is grave concern that Al Qaeda may try to carry out an attack soon to prove it is still active.

The mission was a fulfillment of Obama’s vow — which was controversial when he first made it as a candidate for his party’s nomination — that he would take the fight to bring bin Laden to justice into Pakistan, if necessary.

Last night, Obama addressed this, saying, “I have made it repeatedly clear that we would take action within Pakistan if we knew where he was. That is what we have done.”

Obama added that the operation was done in concert with Pakistan and that he had called Pakistani President Asif Ali Zardari. He said his national security team had called their counterparts in Pakistan.

“They agreed this is a good and historic day for both of our nations. And going forward it is essential that Pakistan join us in the fight against Al Qaeda and against terrorism,” Obama said.

But, Obama was also careful to add, “The U.S. is not and never will be at war with Islam … I made clear, just as President Bush did after 9/11, that our war is not with Islam. His demise should be welcomed by all who believe in peace and human dignity.”

The intelligence operation that tracked down bin Laden outside of the Pakistani capital was more than nine months in the making. It led to the order Sunday for an assault on a sprawling compound outside of Islamabad, where he was gunned down by Navy SEALs as part of a Joint Special Operations Command Force.

Bin Laden's body is in U.S. custody and FBI forensic teams have confirmed that the DNA proves that it is the body of the Al Qaeda leader, national security sources confirmed.

The raid in Abbottabad, just north of the Pakistani capital Islamabad, came out of a vigorous commitment by Obama to push the CIA to make bringing bin Laden to justice the No. 1 priority.

It also came out of a dramatic increase in intelligence assets in Afghanistan and a more aggressive intelligence effort to use drone spy planes. There was also a coordinated effort with Pakistani forces to track down Al Qaeda’s leadership.

One national security source said that it is believed those intelligence assets pushed bin Laden out of the mountains along the border of Pakistan and Afghanistan and deeper into Pakistan.

“There was just relentless pressure in the last two years. We really stepped it up and we believe that was what led to this successful mission and this great day where all of us can finally say we brought bin Laden to justice,” said the well-placed national security official.

The intelligence that began with a tip last August reached a crescendo in recent weeks. There were a series of top-secret briefings through March and April in which the evidence began to line up that indeed Osama was inside living inside a heavily guarded, high-walled compound in Abbottabad.

“It took many months to run this threat to ground,” Obama said.

That led to the order on Friday to carry out an operation to kill bin Laden. The operation itself took place on Sunday and lasted less than an hour with a team of Navy Seals in the forefront of the assault, according to national security sources.

The mission was apparently a stunning success in which few if any civilians were killed and no U.S. forces were killed, said the sources.

But the success comes after more than a decade of frustration and agonizing missed opportunities on the part of the U.S. military, the CIA and the FBI.

In 1998, the administration of U.S. President Bill Clinton sought to kill bin Laden but the mission failed.

In late 2001, in the weeks after the Oct. 7 air strikes that began the U.S.-led invasion of Afghanistan, bin Laden also managed to elude the American military in the mountains near Tora Bora, Afghanistan, and he slipped into Pakistan.

The war in Iraq which began in 2003 pulled important intelligence assets away from Afghanistan and shifted the focus of the military away from the place where bin Laden had orchestrated the Sept. 11 attacks. For more than nearly six years, the mission in Afghanistan went adrift and as a result what remained of the leadership of Al Qaeda went deep underground in Pakistan.

In 2009, Obama vowed to turn the focus back on Afghanistan with a surge of troops and greater intelligence assets. He directed CIA Director Leon Panetta to make bringing bin Laden to justice a top priority of the counterterrorism efforts.

And last night Obama gave credit to those in his national security team who carried it out.

“Tonight, we give thanks to the countless intelligence and counterterrorism professionals who’ve worked tirelessly to achieve this outcome. The American people do not see their work, nor know their names. But tonight, they feel the satisfaction of their work and the result of their pursuit of justice,” said Obama.

“We give thanks for the men who carried out this operation, for they exemplify the professionalism, patriotism and unparalleled courage of those who serve our country," said Obama. "And they are part of a generation that has borne the heaviest share of the burden since that September day.”