Studio 360 is redesigning Monopoly, and to help us decide what to toss and what to keep, we've gotten advice from an all-star team. The former investment banker William Cohan suggested we let players leverage their holdings and create a bank with vested interests, but former New York Governor Eliot Spitzer cautioned that if we follow that path, we should also include an Attorney General --- another office he held in New York.

And we need your help too. Tell us how you'd change the game by May 3.We'll send everyone's suggestions to game design guruBrenda Brathwaite, who accepted our challenge of redesigning Monopoly.So far Studio 360 listeners have come up with some great new designs, ranging from an unbridled hypercapitalist Monopoly to a game with progressive-minded communes.

Mark suggested two new game elements: hostile takeovers and eminent domain. And Massimiliano said the game needs a "Too Big To Fail" card, and inflation pegged to energy prices: "everything will cost more if a monopoly on oil is achieved."

But Tina took a different approach: "Monopoly should be re-invented as a progressive, cooperative community... Instead of buying up properties, players have to plant community gardens, grow what they eat, plant trees, switch to a green energy source, (or) recycle something... The 'winner' is the player that reduces his or her carbon footprint the most."

Dwayne designed his own game, with businesses to buy instead of properties, and "Corporate Secret" cards: 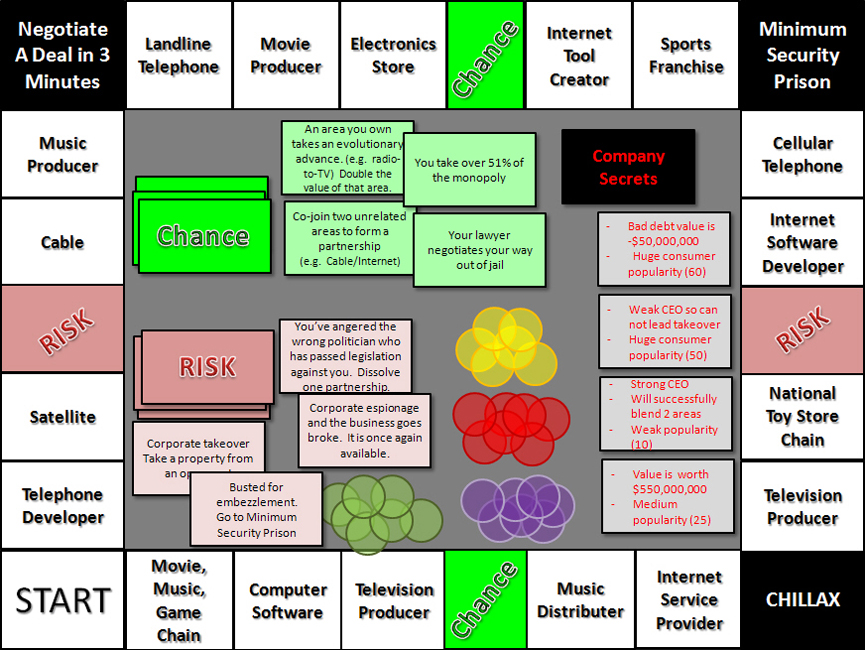 Shannon got really creative. According to her plan, eliminated players would be allowed to reenter the game as a hired criminal element. Once the game is reduced to two players, the player with fewer holdings "can recruit people eliminated in the earlier hours of the game as thugs, or the players eliminated earlier can form an organized crime family." Shannon says these "criminal" players "can burn down hotels! They can shoot up houses! They can start a smear campaign so no one wants to do business with (the winning player)!" And with their ill-begotten cash, they might be able to win the game.