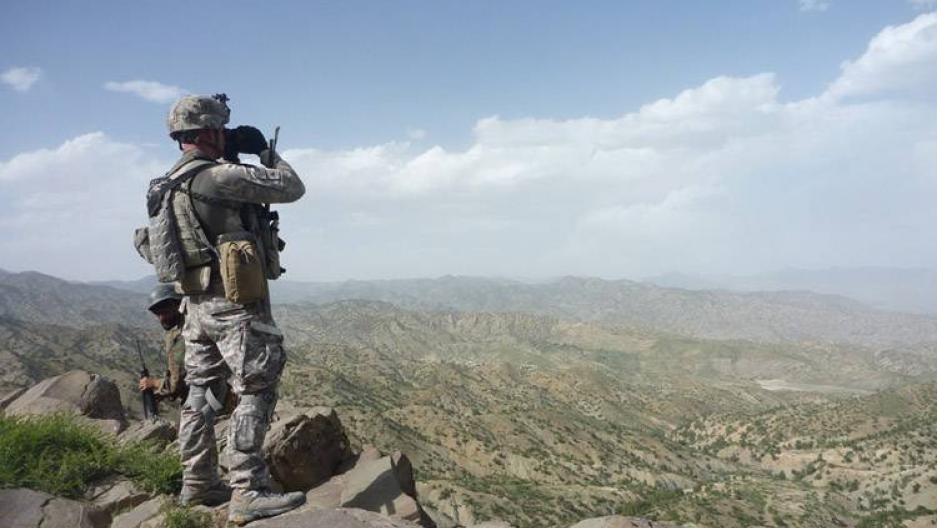 Share
By Jason Margolis Almost 10 years ago, President George W. Bush stood at the White House and announced the start of a US-led attack on Afghanistan and outlined the objectives "By destroying camps and disrupting communications, we'll make it more difficult for the terror network to train new recruits and co-ordinate their evil plans," said Bush. "Initially, the terrorists may burrow deeper into caves and other entrenched hiding places. Our military action is also designed to clear the way for sustained comprehensive and relentless operations to drive them out and bring them to justice." The officially declared mission was dismantling a terrorist network, but the capture or killing of Bin Laden became the symbol of victory. "I think the argument could hold politically, that is to say, we did the job and we can now move on," said Charles Dunbar, the charge d' affaires at the American embassy Kabul in the 1980's. Dunbar said the death of Bin Laden now is a game changer for President Obama's policy options. "If the president needs any justification for moving ahead with a rapid drawdown of our forces there, he will much less vulnerable, in my opinion, to charges, soft on terrorism," said Dunbar. Domestic politics That said, Dunbar says it would be irresponsible to allow domestic politics to drive foreign policy decisions in Afghanistan. Dunbar added that he doesn't think President Obama would succumb to that temptation. Regardless, Bin Laden's capture was an easy-to-grasp policy goal. Juan Zarate with the Center for Strategic and International Studies said Bin Laden's death will re-ignite the debate over what exactly the U.S. objective is in Afghanistan. "It will sharpen the divide between those who think we are there to simply to dismantle al-Qaeda, which this Bin Laden death signals we're on the right track, vs. those who suggest that we're there to maintain stability and security in Afghanistan to deny long-term safe haven for the Taliban and the allies of al-Qaeda," said Zarate. News reports have quoted an Afghan Taliban commander saying Bin Laden's death won't slow their fight in Afghanistan. But there are questions about what the death of Bin Laden means for al-Qaeda's overall strength in Afghanistan and Pakistan. "Removing a charismatic leader does not always end terrorist organizations, but sometimes it does," said Stephen Biddle, senior fellow for defense policy at the Council on Foreign Relations. "And if the removal of Bin Laden weakens al-Qaeda to the point where it withers out and is not succeeded by some other terrorist organization that picks up their mantle, than what that does is to weaken the underlying case for war in Afghanistan, which is after all is about reducing the threat of Islamist terrorism from South Asia," said Biddle. Troop withdrawals Biddle said another impact of Bin Laden's death could be to hasten US troop withdrawals from Afghanistan, though not this year. The US isn't the only nation with a vested interested in how things shake out in Afghanistan. Afghan President Hamid Karzai said Monday that Afghans had taken the brunt of America's pursuit of Bin Laden. "The world should realise what we have repeatedly said all these years and every single day that the war against terrorism should not be followed into the villages of Afghanistan," said Karzai, speaking to regional officials. "The war against terrorism is not in the houses of innocent Afghan civilians. The fight against terrorism is not in bombing children and women in Afghanistan." But Karzai has a public face and a private one. It's likely that his private words with the Obama Administration Monday are different from his public rebuke. Karzai has long worried what might happen if the United States draws down forces in his country. And with the death of Bin Laden, those fears are sure to mount.