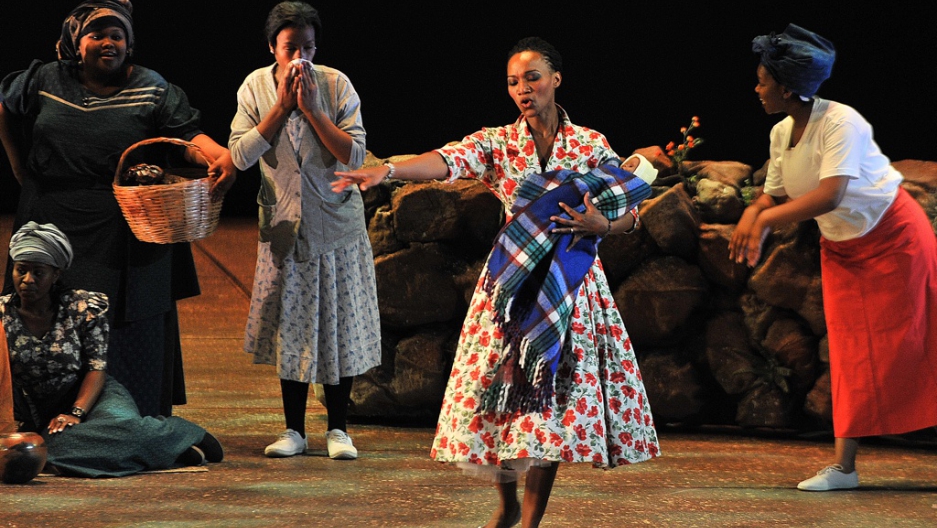 Tsakane Maswanganyi, center, sings the lead role of Winnie Madikizela-Mandela in "Winnie the Opera" which premiered in Pretoria on April 28, 201. The soprano sings the words: "I know I will be demonized and hated in my day, but there is no other way. With our rubber tires and our boxes of matches, we will liberate this land."
Credit: Alexander Joe
Share

PRETORIA, South Africa — To some South Africans, Winnie Madikizela-Mandela is the “mother of the nation,” a woman who sacrificed herself and her family for the liberation of her people.

Others only remember her speeches praising political violence, her criminal convictions and her messy divorce from Nelson Mandela.

A new opera about Madikizela-Mandela’s tumultuous life, has premiered at the South African State Theater in Pretoria, portraying the contradictions and mistakes — as well the bravery — of this controversial and compelling woman.

“Love her or hate her,” says a promotional line for "Winnie: The Opera," “but come and hear her.”

This is arguably the first fully made-in-Africa opera, and the brainchild of two South Africans who met while living in Canada. Warren Wilensky, the producer and librettist, and Bongani Ndodana-Breen, producer and composer, originally conceived an experimental multimedia opera called “The Passion of Winnie,” which played in Toronto in 2007 to scathing reviews.

Despite the initial criticism, Wilensky and Ndodana-Breen haven’t lost their fascination with the life story of Madikizela-Mandela. The new opera has been completely reconceived, moved to South Africa and made in partnership with Mfundi Vundla, a soap opera producer. While the Toronto show was a small-scale production, "Winnie: The Opera" has a $1.2 million budget and was two years in development.

It will be performed with a 30-member choir and the 65-member KwaZulu-Natal Philharmonic Orchestra, with music drawing from the storytelling culture and choral tradition of South Africa as well as classical opera. The libretto is in English and Xhosa, with the main role played by Tsakane Maswanganyi, a Soweto-born soprano who now trains in Italy.

“It is opera, but it is contemporary African opera,” said Ndodana-Breen.

Significantly, it has the blessing of Madikizela-Mandela, who at age 74 is still prominent in South African politics as an African National Congress member of parliament, and who was in the audience on opening night. Madikizela-Mandela was supposed to attend the Toronto show in 2007, but Canada denied her a visa because of her criminal convictions.

After the Pretoria world premiere, she came onstage to address the opera crowd and was greeted with screams and a standing ovation. “You know, this is the first time I’ve ever come into this theater,” Madikizela-Mandela said, referring to its history as a whites-only institution under apartheid. "It was one of those structures we battled to try and bomb."

"The truth can be spoken now!" she said to laughter.

The producers said that despite her firebrand reputation, Madikizela-Mandela made no attempt to control the content of the opera, and didn’t even ask about the storyline.

“She is aware of the controversy and contradiction that surrounds her,” said Ndodana-Breen.

"Winnie: The Opera" opens on a scene from 1997, with the real-life event of Madikizela-Mandela appearing before the Truth and Reconciliation Commission, the panel created to address crimes committed under apartheid and chaired by Archbishop Desmond Tutu.

Madikizela-Mandela’s bodyguards murdered 14-year-old Stompie Seipei, and she was convicted of his kidnapping and being an accessory to assault. She was heavily criticized for her endorsement of necklacing — the practice of placing a burning, gas-soaked tire around the neck of a victim — and for the violent tactics of her supporters, known as the Mandela United Football Club, in the late 1980s.

The opera also recounts her years of persecution under the brutal apartheid system, including torture and more than a year in solitary confinement, plus banishment to a small town in rural South Africa. All while she was trying to raise her two young daughters.

Nelson Mandela makes no appearance in the opera. The couple married in 1958, but he spent much of the next three decades in prison. The couple separated in 1992, not long after his release, and divorced in 1996 amid reports of her infidelity while he was in prison.

“He would have overshadowed Winnie,” said Wilensky. “And the reality was that he wasn’t around.”

In 2003, Madikizela-Mandela was found guilty on charges of fraud and theft.

Wilensky remains sympathetic to the opera’s heroine. “Who are we to judge?” he asks. “As a white South African, I didn’t know the depths of what she went through, and what she meant to people during the struggle. She was the only voice out there — the voice of hope.”

“Either you love her or you hate her, and there are extreme emotions on both ends,” said Ndodana-Breen.

“We are not out to convert people,” added Wilensky.

Directing the opera is Shirley Jo Finney, a veteran African-American theater director who was brought over from Los Angeles. In order to grow closer to her subject, she spent time living in Soweto and in a village in Pondoland in the Eastern Cape province, where Winnie grew up.

“When I came here, I said I want to walk where Winnie walked,” Finney said.

“When I look at her — right, wrong or indifferent — she has always been able to express who she is without fear. You look at her and think, 'Wow, if only we all had that capacity.'”