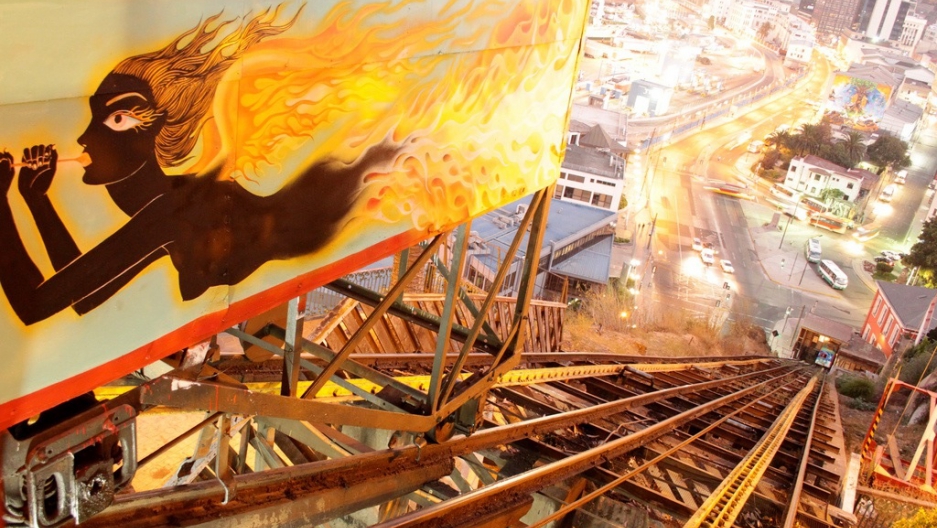 The "ascensores" are the trademark of Valparaiso and an essential mode of public transportation up the city's iconic hills.
Credit: Brad Haynes
Share

VALPARAISO, Chile — “Fewer postcards, more reality” is the rallying cry of Chile’s port city of Valparaiso. Residents of this picturesque but dilapidated city have taken to the streets over the city’s inability to keep its iconic cable cars clattering up and down its fabled hills.

The "ascensores" are the trademark of a city whose residents are fiercely proud of its bay vistas and faded grandeur. In 2003, UNESCO designated Valparaiso a world heritage site.

For the portenos, as Valparaiso residents are known, the cable cars are an essential mode of public transportation — the fastest, cheapest and most agreeable way to travel between the steep hills that are home to more than 90 percent of the city’s 300,000 residents, and the flatland, where its commerce, services and public transportation are located.

Of Valparaiso’s 30 original cable stations set up over a century ago, just five are currently functioning. Another 10 are in varying degrees of disrepair. The remaining 15 are now just a memory.

The grounded cars represent more than disappointed tourists and wounded civic pride — they also raise questions about the difference the UNESCO designation really made to the city and its residents.

In 1998, the government declared the cable cars historic monuments, but little was done to keep them running. The reasons are complex, related to ownership (some stations are privately owned, others are public), administrative turf wars, costs of repairs, alleged unprofitability and, critics contend, incompetence.

At the same time, the ascensores are not officially considered public transportation, which puts them off the grid of safety standards and transport regulations.

Standing at the foot of the now-defunct Ascensor Larrain, two older women marshal the energy required to tackle the seven flights of steps up the hill. Beatriz Aguilera, 79, can walk down but needs a ride to get back up. Her husband operated this cable car for 48 years. Her neighbor Maria Ahumada has a disabled daughter who has been virtually trapped in her home for the past two years for lack of taxi fare.

“It’s not just the people who live up the hill who suffer the consequences, but also the relatives and friends who can’t visit them,” said Natalia Vasquez, 26, a member of the Association of Cable Car Users.

In 2009, the owner of the cable car on Cerro Florida, Natalia’s hill, shut it down, along with two other stations, claiming economic losses. An 87-year-old neighbor started a petition drive demanding action from local officials. Residents of adjacent hills joined in and the Association of Cable Car Users was born.

Since then, the group has staged marches, a demonstration in front of the mayor’s house and, in mid-March, two days of public hearings. It also filed – and won – a lawsuit against the city, arguing that the municipal government has the obligation to step in and regulate transportation in its jurisdiction.

A government-commissioned study by Valparaiso’s Santa Maria Technical University found that the ascensores “do not comply with basic safety standards … . In general, there is a total lack of investment in conservation and maintenance … . Without greater intervention and investment, the cable cars are doomed to disappear.”

The city recently announced that it has sent a government-owned car to the Navy shipyard for repairs, at a cost of $1 million. Getting inoperative privately owned cable cars back on the rails is an even greater challenge. Successive presidents have pledged to buy the 11 privately owned stations. But exactly how the regional government will purchase and operate the system is still under negotiation, with the details of the arrangement scheduled to be announced in May.

Behind the debate over the cable cars, a larger question looms: Has the UNESCO designation really helped Valparaiso?

Valparaiso's status as a world heritage site helped the Chilean government receive a $73 million loan from the Inter-American Development Bank to preserve Valparaiso’s historic quarter. Most of these funds have been spent on paving streets, improving street lights and transforming blocks of rusty corrugated sidings into bright multi-colored facades overlooking the harbor. A Belle Epoque-style palace has been partially restored and reopened as an art museum.

But the UNESCO designation has also triggered speculative real estate deals that have crowded the city’s three or four most visited hills with new boutique hotels and niche restaurants. As a result, tourist enclaves are displacing permanent residents and destroying neighborhood life, angry neighbors claim.

“The people who live up in the hills are losing their traditional neighborhoods,” said Cristian Amarales, an activist with the Red Cabildo Valparaiso civic network. “Those people don’t feel any connection to the UNESCO designation. They say ‘That’s for the elite in the flatland.’ The UNESCO designation is turning Valparaiso into a segregated city.”

“The cable car dilemma epitomizes the exaggerated importance given to tourism over everything else in this city,” said Jose de Nordenflycht, president of Chilean chapter of the International Council on Monuments and Sites. “People who use ascensores everyday as transportation are not the target of this investment. These funds are aimed at tourists who are willing to pay 10 dollars to go up and down the hills. But tourism tends to kill the goose with the golden eggs — our local patrimony.”

In mid-April, Chile hosted the “Elevators and Funiculars of the World” Industrial Heritage Congress. The event highlights the need for the “urgent rescue” of “the world’s most important collection of cable cars and funiculars.”

Experts from around the world visited Ascensor Polanco, now back in operation after a long hiatus, with its distinctive yellow tower, 150-meter stone tunnel, bridge and 60-meter vertical ascent. They also visited the touristy Ascensor Artilleria, its two cars newly painted by New York City artist Nicolina. Inspired by a photo posted on the internet, she tracked down its private owner for permission and then donated her own resources in paint and time. “I saw Artilleria online and instantly became obsessed with painting it,” she confessed.

The cars now transport, in addition to thousands of visitors, four goddesses (sky, earth, fire and sea) and other allegorical tributes to port myths and legends.

“For those of us who live here, the situation is very sad,” said Beatriz Aguilera, the elderly woman stranded at the foot of Ascensor Larrain. “But for visitors, the ascensores provide memories of Chile that they will remember forever.”