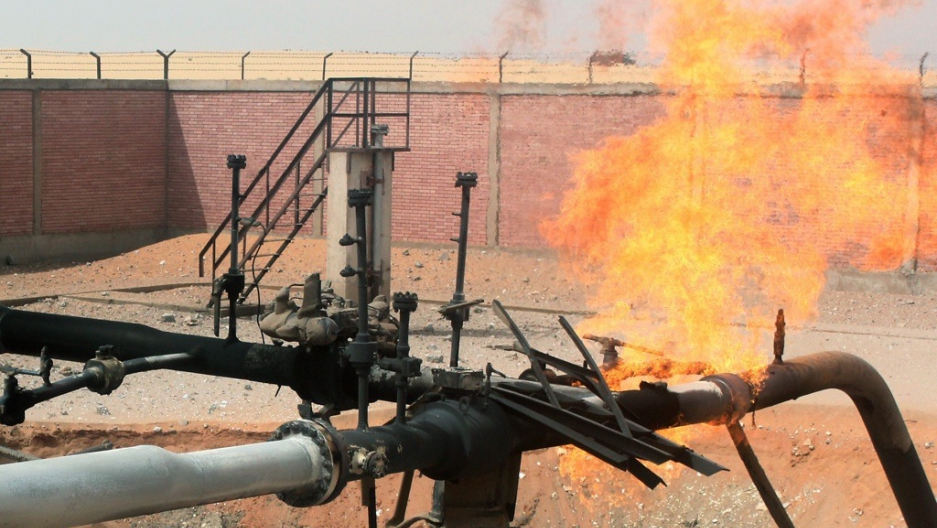 Flames shoot into the sky from a gas pipeline after unknown saboteurs bombed it on April 27, 2011, forcing authorities to cut supplies to Israel and Jordan.
Credit: -
Share

JERUSALEM — Flames as high as 65 feet erupted along an Egyptian natural gas pipeline this week when unknown saboteurs rammed a vehicle into a monitoring room, cutting off gas supplies to both Israel and Jordan.

It is the second attack on the pipeline in the three months since the former Egyptian president, Hosni Mubarak, stepped down.

The attacks have come amid calls by ordinary Egyptians for a renegotiation, or outright cancelation, of the country’s gas supply contract with Israel, raising alarms here that one of Israel’s only current sources of gas might soon be shut down.

Even before the Wednesday explosion, the deal had been on shaky ground. In mid-April, Egyptian prosecutors issued an arrest warrant for the country’s former oil minister, partly because of his role in approving the gas contract with Israel. Authorities accused the minister of selling gas to Israel at artificially low rates.

Speaking at a press conference on Wednesday, Israeli National Infrastructures Minister Uzi Landau denied that the rates were low and said he would not renegotiate.

The Egyptian gas line to Israel was first laid in 2008. It stretches from El-Arish, a city on the Mediterranean coast of the Sinai Peninsula, to Ashkelon, Israel's southernmost coastal city and home to a major power plant.

Under the deal signed between the two countries in 2008, Israel is assured an average of about 1.7 billion cubic meters of gas a year from Egypt for 15 years. But many Israelis are doubtful the deal will hold in the post-Mubarak era.

"Egyptian gas, as a reliable, long-term contracted supplier, I don’t think Israel should count on it," said Brenda Shaffer, a professor of political science at the University of Haifa and author of “Energy Politics,” published in 2009.

The gas deal is only possible because of a peace treaty signed between the two countries in 1979. But now, with the ouster of Mubarak, some Egyptians are beginning to rethink that alliance.

A poll of 1,000 Egyptians, conducted by the Pew Research Center on April 25, found that 54 percent wanted to annul the peace treaty. Landau said his country should be prepared for a situation where “gas flow from Egypt would stop."

All the uncertainty surrounding the gas line has forced Israel to consider its alternatives. For the time being, its domestic supply is thought to be enough to float the country for at least a year. What Israel will do after that, however, is anyone’s guess.

The country can rely partly on the Yam Tethys gas field, which is off Ashkelon's coast. It can also always fall back on more polluting fuels like oil and coal. But such alternate arrangements cost Israel $1.5 million a day, according to government figures. In addition to its current domestic gas supply, Israel also has recently discovered two larger reserves off its coast, but production is not scheduled to begin until 2013.

Some Israelis, however, don’t think the attacks are a sign of deteriorating relations between Israel and Egypt. Instead, they say, the attacks are simply the result of poor security in the Sinai Peninsula.

"The sabotage is not directed against Israel, but has to do with problems relating to law enforcement in Sinai," Amos Gilad, director of the defense ministry's political security staff, said Wednesday on Israel Radio.

Yosef Maiman, a shareholder in the East Mediterranean Gas Company, which imports gas to Israel, said after the first attack on the gas line that Egypt was unlikely to cancel simply because its economic interest was too great.

“They have never violated international agreements and continued to sell us oil even when we flew over the skies of Baghdad," he said at a conference in February.

But as new powers begin to align, and political campaigns begin to form, in Egypt, it might take more than an economic incentive to keep the gas pumping.