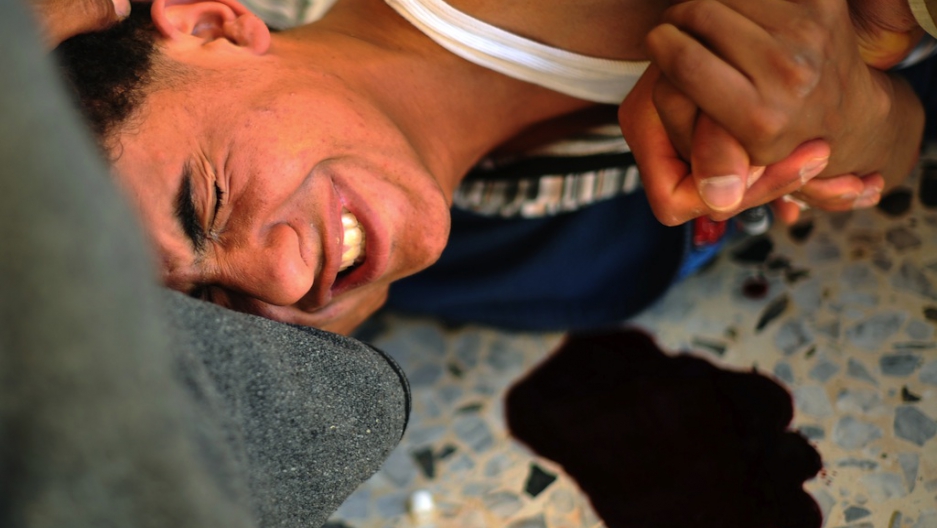 A young Libyan rebel, who was wounded by a sniper bullet, is treated by medics in a makeshift clinic at a house close to the front line in Al-Ghiran, near Misurata airport, on April 29, 2011.
Credit: Christophe Simon
Share

In a live speech on state TV Saturday, Libyan leader Muammar Gaddafi called for a mutual cease-fire and negotiations with NATO, which NATO later rejected.

Gaddafi also said he would not step down or leave the country.

Gaddafi said he was ready for a cease-fire as long as NATO forces stopped their air strikes on the north African country, which has been engulfed in fighting for the past two months.

"[Libya] is ready until now to enter a cease-fire," Gaddafi said, as reported by Reuters.

"We did not attack them or cross the sea ... why are they attacking us?" he asked, referring to the NATO allies engaged in air strikes. "Let us negotiate with you, the countries that attack us. Let us negotiate."

NATO rejected the call for negotiations, saying the air strikes would continue as long as Gaddafi put civilians at risk, Voice of America reported.

In the 80-minuted televised address, Gaddafi denied using his forces to launch attacks on civilians.

He also refused to leave the country or step down, a key demand by the rebels who have said they will not stop fighting until Gaddafi and his sons step down. The United States, France and Britain have also demanded Gaddafi relinquish his powers.

"I'm not leaving my country," he said. "No one can force me to leave my country and no one can tell me not to fight for my country."

After weeks of NATO air strikes on Libya, Gaddafi's forces and the rebels face a stalemate. Weeks of intensified fighting around the port city of Misurata have left hundreds dead. Government forces killed 15 people, including a 9-year-old boy, in Misurata Saturday, the Guardian reports.

Gaddafi made his speech early Saturday as NATO bombs hit a government complex in the capital, Tripoli, it states. The strikes damaged buildings housing a commission for women and children and offices of parliamentary staff.

A day earlier, the fighting in Libya spilled over the border into Tunisia, prompting the Tunisian government to express its "extreme indignation" at Libya.