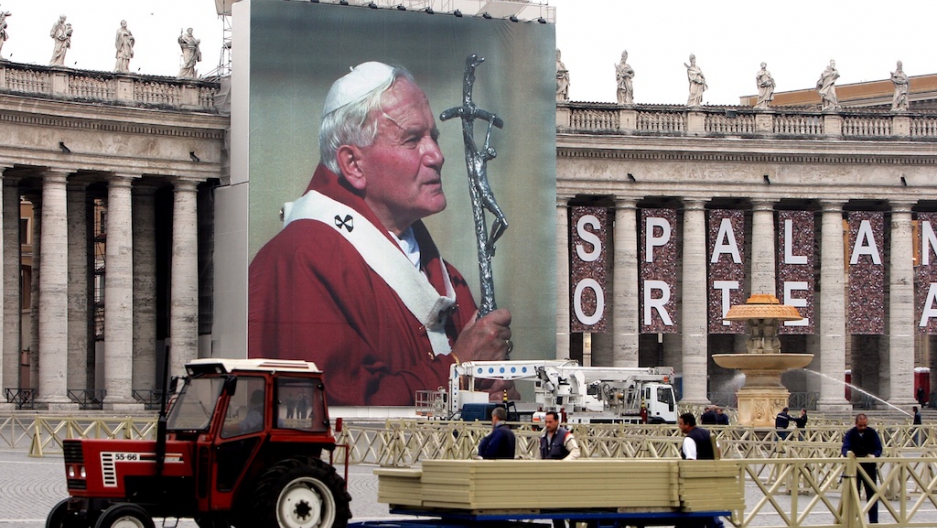 John Paul II has been beatified in a lavish ceremony watched by an estimated one million Catholic pilgrims at the Vatican and millions more people on TV and via the internet.

A giant tapestry of the late pope was unveiled at the front of St Peter's Basilica, as a vial of his blood was presented to his successor, Pope Benedict XVI, by two nuns, according to the Telegraph.

"One of them looked after John Paul in his final years as he became crippled with Parkinson's Disease, while the other, a Frenchwoman, was purportedly cured of the same disease after praying to John Paul — the miracle that enabled his beatification," wrote the paper.

Tens of thousands of people from around the world traveled to Rome for Sunday's beatification mass.

The beatification, which is the final step before possible sainthood, took place in St Peter's Square, which was decorated with portraits of the pope and banners with photographs reflecting his years in Rome.

"It's almost as if he is here," Enzo Arzellino, who traveled with his parish group from southern Italy, told Reuters. "For the people he is already a saint. This is just a step towards official recognition from the church."

Rome is decorated with posters of the pope on buses, taxis and hanging from lampposts, it states.

The group of attendees who arrived in Rome ahead of the beatification included Zimbabwean President Robert Mugabe, the Associated Press reported. Mugabe, who has been accused of gross human rights violations, faces a travel ban by the European Union. He has been able to get around that ban because the beatification was held in Vatican City.

It states that Mugabe was heavily criticized for attending the pope's funeral in Vatican City in 2005.

The pope's body was exhumed Friday ahead of the beatification, which was streamed live on YouTube.

A sample of John Paul's blood, taken from the ailing pope during the last days of his life in 2005 in case they were needed during a transfusion, will also be put on show for adoration. The blood, held in four containers at the Vatican's Bambino Gesu hospital in Rome, was never used and has remained in a liquid state due to an anti-coagulant in the containers.

During the ceremony, aides were to testify about the pope's battle with Parkinson's disease and then the ceremony will focus on the story of a French nurse cured of the same disease, reports the AP.

"Sister Marie Simon-Pierre's inexplicable cure was deemed by the Vatican the miracle needed to beatify John Paul," the report said.