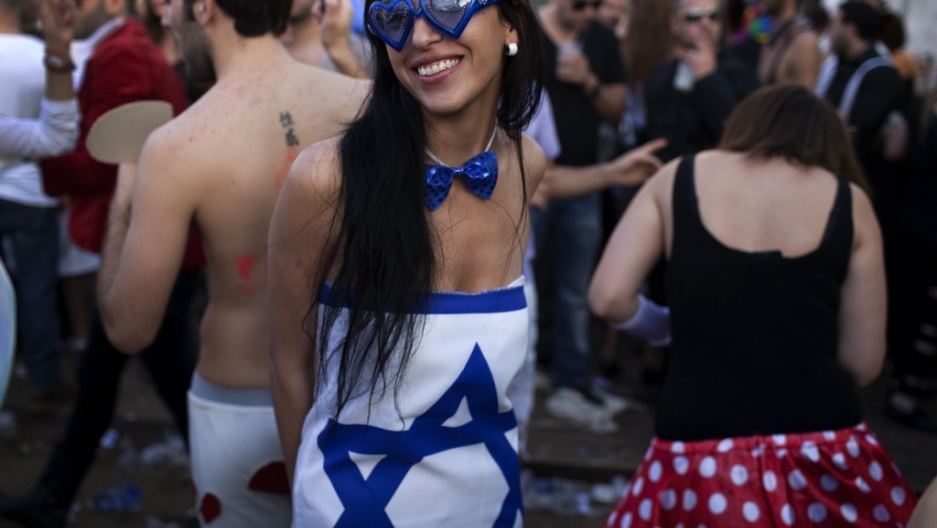 Israelis at a party in the Israeli coastal city of Tel Aviv on March 19, 2011.
Credit: Menahem Kahana
Share

JERUSALEM — JERUSALEM — Israeli leaders and commentators could not help gloating as they watched Syrian President Bashar al-Assad writhing under the pressure of the Arab world’s latest revolt.

Unlike Egypt, whose leaders were committed to peace with Israel, or Tunisia and Libya, which long ago became minor players in the anti-Israel coalition, Assad’s Syria is regarded as one of Israel’s deadliest enemies.

“Even in our world colored with grays and not only blacks and whites, the fall of the Assad regime in Damascus would be a great blessing for the Middle East and the world,” wrote Mordechai Nisan, a former lecturer in Middle East studies at the Hebrew University of Jerusalem.

“The list of Syria’s misdemeanors and crimes is legion. From belligerent Soviet ally to godfather and patron of Palestinian terrorism, Hafez the father and Bashar the son crafted a policy strategy that demonized Israel, betrayed the Arab world, consolidated the regional hegemony of Iran, and perpetuated an Alawite sectarian regime in defiance of the Sunni Muslim majority in the country,” Nisan wrote in the Israeli daily, Yedioth Ahronoth.

“With the Assads gone, the Middle East as a whole will be able to move to transcend the state of terror and tension with which the Syrian regime poisoned the political atmosphere for over four long decades,” he concluded.

Israeli observers were also bemused by the sudden discomfiture of radical Palestinian groups — including Hamas, Islamic Jihad and the Popular Front for the Liberation of Palestine — whose headquarters are in Damascus and who have long enjoyed the financial and political support of the Syrian dictatorship.

The Meir Amit Terrorism and Intelligence Information Center, a clearing-house for Mossad and Shin Bet analysis, said in a commentary that the Hamas leadership in Damascus was “attempting to play both sides of the fence … saying it supported both the Syrian leadership and the Syrian people.”

Hamas was particularly exposed when one of its heroes, Muslim Brotherhood spiritual mentor Sheikh Yusef al-Qaradawi, backed the Syrian protesters in a sermon aired on Al Jazeera on March 25. Calling for all-out revolution in Syria, he lambasted Assad and warned that “those who do not change will be trampled.”

“Hamas has found itself in a predicament over the clash between its solidarity with Muslim Brotherhood elements in Syria interested in toppling the regime, as well as with al-Qaradawi’s attack on Bashar al-Assad, and its dependence on the assistance provided by the Assad regime to its infrastructure and terrorist activity,” observed the center.

But Itamar Rabinovich, a former Israeli peace negotiator with Syria, warned that the picture was more complex. In early April, writing in Foreign Affairs, Rabinovich said that while Assad is no doubt a ruthless adversary, “Israel itself is ambivalent about the future of his rule.”

“Israeli leaders believe that Syria and the Iranian axis have been weakened by the domestic unrest plaguing Assad’s regime. But like others in the region, they wonder what the alternative to Assad might be. Although they are aware of pro-democracy and human rights groups active inside Syria and abroad, they naturally fear the power of the Muslim Brotherhood,” Rabinovich wrote.

In a commentary last week, Rabinovich suggested that Israel open a back-channel dialogue with Assad, offering to help him survive in return for changing the diplomatic dialogue between the two countries.

“People in Bashar Assad’s situation are concerned about their physical survival and Israel has something to offer in this area,” Rabinovich told Israel Radio. “We could change the agenda between us and Syria. The agenda doesn’t just have to be about a peace deal and territorial concessions.”

But for most Israelis the chance to see Assad fall is not to be missed.

“It is difficult to support any position that allows for the Assad regime’s continued rule,” wrote former Justice Minister Tzachi Hanegbi in the Jerusalem Post.

“Syria, via its proxies, spilled Israel Defense Forces blood in Lebanon for three decades,” Hanegbi recalled. “Assad offered a safe haven in Damascus to senior leaders of terrorist organizations and allowed them to continue their terror activities, with unlimited freedom, from his capital. The Syria-Iran alliance has provided Hamas and its satellites with financial aid, training camps, a supply of modern weapons and political backing … Syria’s enthusiastic support for Hezbollah has turned it into Lebanon’s strongest organization.”

Whatever outcome Israel would like to see in Syria, past attempts at interference in neighbors’ affairs are not encouraging. Israel’s effort to foster regime change in Lebanon in 1982 by backing the Christian Phalange movement led to the assassination of its leader, Bachir Gemayel, and the rise of Hezbollah. Israel’s encouragement of Islamic groups in Gaza in the 1980s to counter the influence of the Palestinian Liberation Organization led directly to the creation of Hamas.

Joshua Teitelbaum, principal fellow of the GLORIA Center in Herzilya, said Israel can do little more than watch and wait.

“When all is said and done, if his regime is gone, it has the possibility of being good for us. This is an ally of Iran, one who props up Hezbollah. The people who come into control, and we don’t know who they are, might choose a different policy. They might seek the comfort of the United States for all we know. There are many options.

“What we do know is that this is a very damaging regime — damaging to its own people, damaging to Lebanon and the independence of Lebanon, totally supporting Hezbollah and Iran’s main ally in the Arab world. So the weight of things from Israel’s perspective and also from an American perspective is clearly against this regime,” Teitelbaum said.

But he said it was doubtful the uprising would lead to a sudden flowering of democracy because of the ruthless suppression under the Assad regime — father and son.

“This is an authoritarian regime that’s been there for a long time controlling its people. Economically it’s horrible for them. They are not advanced. They are not sharing the fruits of globalization,” Teitelbaum said. “There’s no civil society in Syria. There’s no way to organize in Syria.”

“I think it’s more likely there’ll be some kind of regime change. There are so many unknowns here. If it’s an Alawi takeover, and they’re going to switch for another Alawi leader, it’s not going to be democracy.”