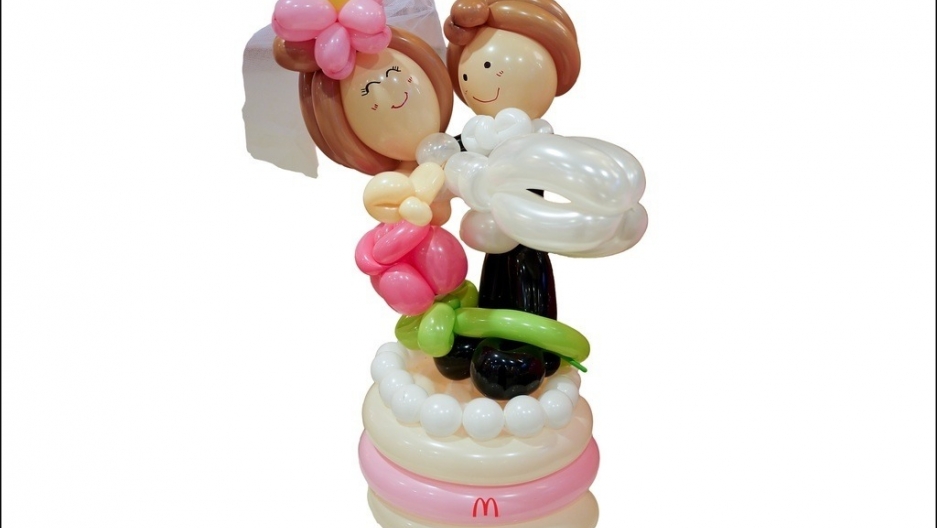 HONG KONG — It may not be a royal wedding, but a typical Hong Kong marriage ceremony is epic in scope.

McDonald’s, of all places, has a better offer — and, yes, it comes with fries.

Beginning in January, the U.S. fast food chain’s Hong Kong operation responded to what it called strong customer demand and began offering wedding party packages at three of its 225 locations. The “Warm and Sweet Wedding Package” pares the wedding process down to the bare essentials.

For less than $1,300, a couple gets a venue and decoration, invitation cards, audio equipment, McDonaldland figurines for each guest, an emcee and $385 worth of McDonald's food.

In addition, the bride and groom can choose among wedding gifts that include a crystal McDonald's house and a pair of balloon wedding rings inscribed with the iconic golden arches.

The themed wedding isn't a new concept in Hong Kong.

In 2006, the government passed a law that made it possible for couples to get married virtually anywhere. Since then, weddings have taken place in shopping malls, boats, and on board Hong Kong's double-decker trams. Hong Kong Disneyland hosts “Fairy Tale Weddings” and Ocean Park, another theme park, hosted Hong Kong's first underwater wedding in 2007.

Katemagg Chau, the founder of Katemagg Event and Weddings and the director of greater China at the Association of Bridal Consultants, says that the average wedding in Hong Kong costs $26,000. With about 50,000 weddings per year, this means that Hong Kong's wedding industry is worth about $1.3 billion — and that's U.S. dollars.

“For the mass market, a McDonald’s wedding is a really good deal, so I think it would be good for people who don’t want to spend a lot of money and just want to have a theme wedding at McDonald’s,” Chau said.

Indeed, McDonald’s has hit an ideal price point for couples on a budget. But the question remains: Besides the sheer affordability, why would a couple choose to wed at McDonald’s?

James L. Watson, an anthropologist at Harvard University who studies Chinese society, explains that the idea of a “McWedding” embodies a cultural transition among young people in Hong Kong.

“In the past, Hong Kong has always been a place where weddings are an occasion for ostentatious display and conspicuous consumption,” he said. “What this shows is that a lot of young people no longer care about that sort of thing.”

At the same time, however, it is important to consider that McDonald’s occupies a far different place in Hong Kong’s cultural landscape than it does in the West.

In Hong Kong, one of the world’s most densely packed urban environments, 90 percent of families live in homes smaller than 700 square feet. To those who live in these tight living quarters, McDonald’s outlets represent communal oases, Watson wrote in his book, "Golden Arches East."

McDonald's, which arrived in Hong Kong in 1975, redefined the notion of a commercial eating establishment. It was the first to offer clean bathrooms, a casual and smoke-free environment and cheap food on a wide scale.

McDonald’s has also endeared itself to generations of Hong Kong youth by playing different roles throughout their lives — first as the place to have a birthday party, then as the place to go after school, where homework, socializing and matchmaking could be done in a safe and spacious environment.

Generations that grew up with McDonald’s have now hit marrying age, and view McDonald’s as a viable wedding venue.

“It’s unfair to pinpoint McDonald’s, as there are many kinds of fast food shops,” said Daniel S.Y. Ho, an assistant professor at the School of Public Health at the University of Hong Kong. “Fast food is only one of a myriad of factors, and they all must be tackled together.”

Furthermore, the image of McDonald’s as a steamrolling multinational corporation holds little weight in Hong Kong, where the economy is inherently multinational, most foods are imported, and multiple generations have lived under distinct sovereign powers given Hong Kong’s handover from Britain to China in 1997.

Since its official launch, McDonald’s has hosted three wedding parties, but more than 130 people have inquired about the service — suggesting that the novelty may soon gain steam. McDonald's declined to give out contact information for the three couples.

When asked about what might entice a couple to wed at McDonald’s, Chau, the wedding planner, paused before answering.