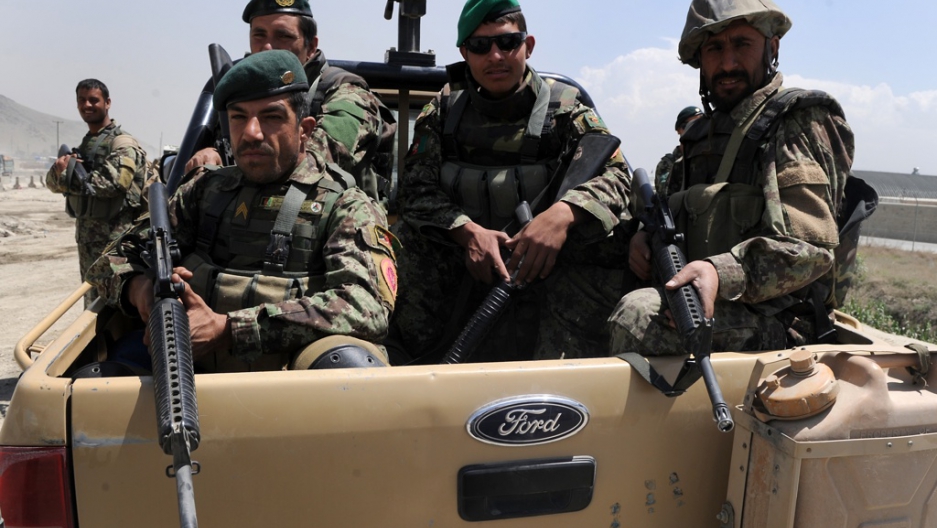 KABUL, Afghanistan — All was quiet in Kabul on Thursday, with the most dramatic events climatic in nature. A huge dust storm blew in around noon, bringing high winds and thunder.

Plans for the traditional military parade to mark Mujaheddin Victory Day — the anniversary of the overthrow of the Soviet-backed Najibullah regime by the Northern Alliance in 1992 — were scrapped Wednesday night after an Afghan Air Force pilot opened fire on NATO troops, killing eight military personnel and one contractor.

Defense Ministry spokesman General Zahir Azimi did not mince words when he announced the cancellation.

“For security reasons and in order to avoid threats against defenseless people, the military parade and gatherings will not be held," he told reporters at a press conference Wednesday evening.

The concession marks a clear triumph for the Taliban, who had threatened to disrupt any festivities scheduled for the controversial holiday.

Mujaheddin Victory Day — known in Dari as Asht-e-Saur (8th of Saur, for the date on the Afghan calendar when the event occurred), tends to bring out the worst in Afghan inter-factional relations. Some see the day as heralding the worst years in Afghanistan’s recent history — the brutal civil war that tore the country apart and set ethnic and political groups at each other’s throats.

Others, however, relish the chance to honor the sacrifice that the Afghan fighters made in battling and ultimately defeating a far mightier enemy — the Soviet Union.

The Taliban have long scoffed at the government’s Victory Day celebrations; they consider themselves the true mujaheddin, who fought for their country’s freedom. The government of President Hamid Karzai, they say, has given Afghanistan back to the infidels, by welcoming the presence of international troops.

In 2008, Karzai narrowly escaped assassination in a shooting that the Taliban claimed credit for. In 2009, no formal events were held to mark the day, a fact about which the Taliban were quite jubilant.

In a statement from 2009 that could just as easily apply to today, Taliban spokesman Zabiullah Mujahed boasted that the Taliban had managed to frighten the Afghan government into bending to their will.

“This year … the Mujahideen of the Islamic Emirate of Afghanistan had resolved that if the mercenary Karzai administration committed the stupidity of marking the 8th of Saur [28 April i.e. Mujahideen victory anniversary] with a military parade by the mercenary army trained by the crusader forces, then they [Taliban] would carry out large-scale, martyrdom-seeking operations on them.

"The enemy [Afghan government] was challenged about this in advance. That is why the enemy did not mark this day out of fear.”

No doubt similar statements will follow this year’s last-minute cancellation.

But it does raise the question of the relative strengths of the Taliban and the Afghan government, especially with security responsibility for Kabul province and six other sites about to be handed over to Afghan forces.

If the Afghan security forces, which now number some 275,000, cannot hold in check a group of fighters that the most generous estimates peg at no more than 30,000, then what will happen when the last foreign combat troops leave the country in 2014?

The U.S. military professes to be unruffled by recent setbacks.

U.S. Lt. Gen. William Caldwell, who assumed command of the NATO Training Mission Afghanistan (NTM-A) in November 2009, told a press briefing in London in mid-April that the Afghan security forces would be ready to take control by the target date of December 2014.

He also said that a more rigorous vetting process had been introduced in the Afghan army to weed out possible Taliban infiltrators, a problem that has become increasingly serious over the past few weeks.

But that will not help the nine people — eight military and one civilian — killed by an Air Force pilot at Kabul International Airport yesterday.

The Taliban claimed that the act was carried out by one of their own, a sleeper agent named Azizullah. But Dr. Hassan Sahebi told the Afghan media that the assassin was his brother, Ahmad Gul, a man driven to despair by economic difficulties, and with no links to the Taliban.

The U.S. military is keeping quiet about the incident, pending notification of the victim’s families. The Afghan government has also been a bit economical with information.

But there is no denying the facts — the situation appears to be steadily deteriorating. The Taliban claim that they have dozens of sleeper agents inside the armed forces, which, true or not, is sowing fear and suspicion among military men and women, both Afghan and international.

Since the beginning of April there have been several incidents where men in military uniform have opened fire on NATO personnel. Five troops were killed in Jalalabad on April 16, another two in Faryab at the beginning of the month.

The Defense Ministry was attacked on April 18 by another would-be assassin in army garb, who failed in his attempt to get the minister but killed three others and wounded six before he was taken down by guards. The Kandahar police chief was also assassinated by a suicide bomber in a police uniform, on April 15.

And on April 25, the Taliban staged a brazen escape from Sarposa prison, in Kandahar, in what many say could only have been a plot planned and executed with high-level government or military involvement.

General David Petraeus has said that the Taliban’s momentum has been halted throughout the country and even reversed in some places. This will be the decisive year, he says.

The Afghan government also professes to be confident that the Taliban are on their way out.

But there were no celebrations of Mujaheddin Victory Day this year.