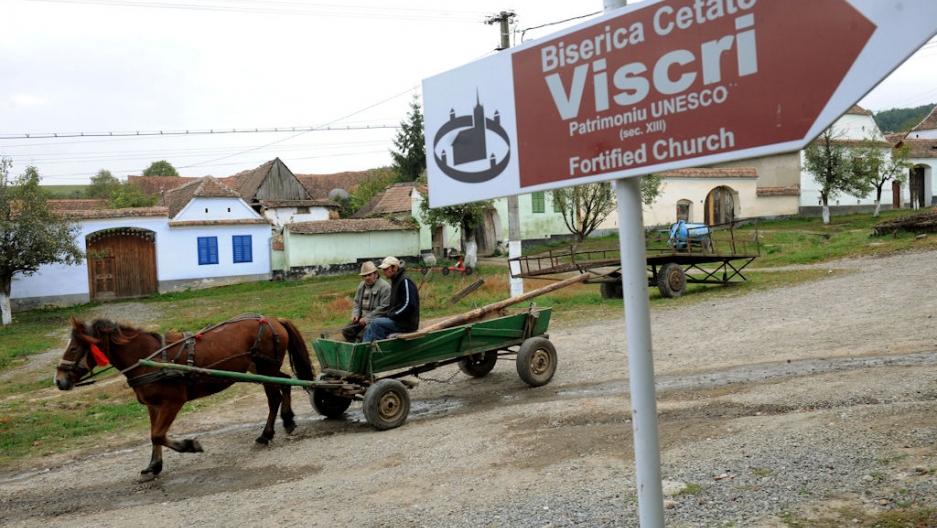 Men ride a carriage in Viscri, Romania, on Oct. 8, 2010. More than 11,000 tourists from around the world came in 2009 to see Viscri's pastel-coloured houses and its UNESCO World Heritage fortified church.
Credit: Karina Knapek
Share

GRAZ, Austria — It would be the biggest boon to Romanian tourism since Dracula.

The impoverished Transylvanian village Viscri has made a surprise appearance on the media's short list of possible honeymoon destinations for Britain's Prince William and his bride, Kate Middleton.

The village, in the dead center of Romania, lacks the fame of other possible destinations, such as Petra, Jordan or the Great Barrier Reef, or the comfort of others, such as the Isles of Scilly off the English coast or the Queen's Balmoral estate. In Viscri the horse and cart is still king and the most imposing building to be seen for miles is a white church fortified 500 years ago. Barefoot girls walk the streets feeding flocks of geese and villagers peddle knitted socks at the edge of dirt passageways.

Still, locals say the UNESCO world heritage site would offer a royal fairytale. "A white church, a white dress for a princess," said Anisia Stanculescu, the landlady of a guest house in Viscri. "It is not a palace with hundreds and hundreds of golden beds built by stupid rich people just because they had money." Rather than offering ancient or natural wonders, she said, "It is a human monument."

The possibility of the couple spending time in the quaint rural backwater appeared in the Romanian press last week. Locals were said to be eagerly preparing the red carpet treatment, having seen what they thought might be royal security. Farm houses restored by William's father, Prince Charles, a long-time Transylvaniaphile, were reportedly being spruced up.

Charles has been supporting efforts to enhance the area's rural time-warp quality since becoming enamored of it in 1997, when he visited to highlight the destructive building policies of Romania's longtime ommunist ruler, Nicolae Ceaucescu. He has said a family connection — a distant relative married the crown prince of Romania who came to power after World War I — further tied him to the area.  In late 2006, Charles bought two holiday homes in Viscri, one for paying guests and the other for his own use. The manager of these properties, Count Tibor Kalnoky, and his wife, Countess Anna, are among the wedding guests.

While in the area, the royal couple would surely tour the famous Viscri church. They could also soak up nature by walking or riding. The honeymooners could sample local delicacies including homemade jam, goose soup and sausages. They could go birding, and might run into wolves and bears in the wilderness.

Long before well-meaning British royalty came along, Viscri was settled by Szekler Hungarians. Then, from 1185, it was dominated by German-speaking Saxons, who remained the bulk of the population until West Germany struck a deal to allow them to leave communist Romania in the 1970s. Most took the offer, so now there are only about 30 German speakers left. Their places were taken by Gypsies, also known as Roma.

"The people there are very nice and normal," Stanculescu said. And some fellow visitors might provide a helpful hint. "We have pair of storks that come every year and have little babies, which would be a nice example for the prince and princess."