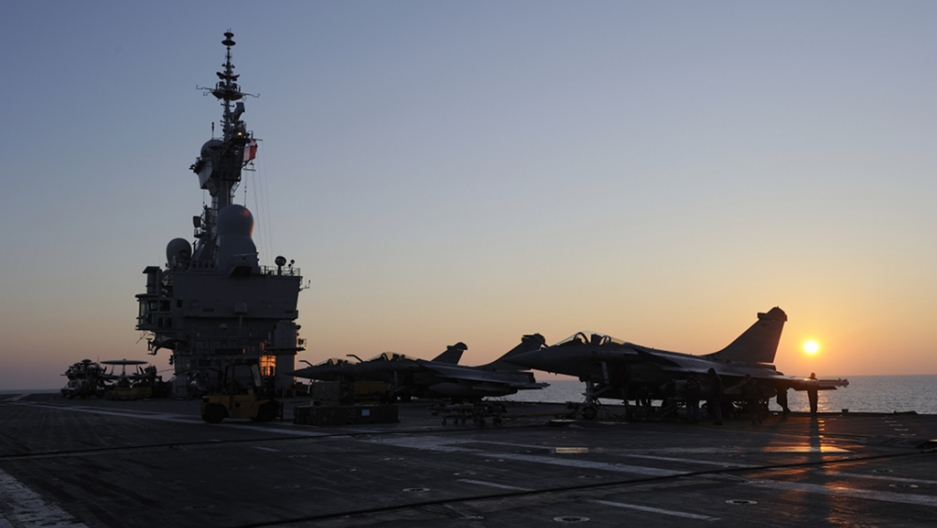 BOSTON — The Chinese military is putting the finishing touches on its first aircraft carrier, which could set sail later in 2011.

What will its first mission be? Officials aren't saying. But its neighbors worry that the vessel’s putative name may provide a not-so-subtle hint.

The ship is rumored to be called the Shi Lang, after a Qing Dynasty admiral who in 1681 conquered the Kingdom of Tungning — a territory better known today as Taiwan.

If it is christened as such, the political implications would be "obvious," said Tsai Der-sheng, head of the Taiwanese government’s National Security Bureau.

One of China’s staunchest strategic priorities is to bring Taiwan — which it regards as a rogue province — back into its fold. The island has essentially been independent since 1949, when Mao Zedong’s ragtag communist army overthrew China’s Kuomintang government. The Kuomintang's supporters fled across the China Straits (carrying an eye-popping fortune in national treasure) and have largely run the island since.

Likewise, in the 17th century, Taiwan served as a refuge for the derelict Ming Dynasty after it was vanquished by a starving, neglected peasantry. Ultimately, Adm. Shi Lang finished the job, conquering the last Ming elite and claiming Taiwan for China.

So will the aircraft carrier enable Beijing to repeat the historic admiral’s feat? Or will the real winners be the weapons merchants as Asia’s arms race heats up?

On thing is certain: China has devoted an enormous amount of energy to the project, now over two decades in the making. Beijing purchased the warship’s hull in 1998 for a mere $20 million from Ukraine, where its construction had halted when the Soviet Union collapsed.

Officials suggested it would be used as a floating casino in the gambling mecca of Macau, along China’s southern coast. Lacking engines, steering or electronics, the hull was reportedly towed by tugboats through Turkey’s treacherous Bosporus and around Africa’s Cape of Good Hope in an epic, multi-year journey to China. The ship eventually found its way to a dry dock in Dalian, north of Shanghai. There, it was painted sea gray and is now being refurbished with modern military hardware.

The question is whether it’s worth the effort, given the realities of 21st-century warfare.

True, the carrier could eventually enable China to exercise air power around the world. The U.S. operates eleven such floating airports — which currently enable it to attack Libya from the Mediterranean. The Pentagon has come under criticism domestically for ordering as many as seven new ones over the next three decades, at a cost of more than $12 billion each. Several other nations — including France, the United Kingdom and Russia— maintain the massive vessels. But some argue that smaller, more nimble (and less pricey) ships, or even long-range bombers with global reach, would be more effective.

Operating a carrier is both costly and complicated. In the near term, China will have to develop and test aircraft that can serve on a carrier. Beijing recently unveiled photos of its new J-15 Flying Shark attack jet, which has the necessary features, such as folding wings and a shortened tail cone, needed to accommodate tight quarters. The plane will soon be ready for test flights, the New York Times reports.

That’s just a first step, however. “An aircraft carrier requires not just a functioning air group — itself composed of not only fighters and strike aircraft — but anti-submarine, airborne early warning and in-flight refueling aircraft, but also a variety of escorts to provide additional air, surface and sub-surface protection,” writes Dean Cheng, a research fellow at the Heritage Foundation. It could take as long as a decade before China can deploy a functioning aircraft carrier group, according to Cheng.

There are also tactical limitations that render carriers somewhat obsolete against major powers. China is well aware of this: it is currently developing an anti-ship ballistic missile that could threaten U.S. carriers.

Senior U.S. and Asian naval officers “regard the [Chinese] carrier as a manageable threat,” writes Douglas H. Paal, vice president for studies at the Carnegie Endowment for International Peace, formerly the unofficial U.S. ambassador to Taiwan (unofficial because Beijing prevents the U.S. from officially recognizing the island’s government).

“Some [military experts] joke that they hope China will acquire five more battle groups and waste even more money that could go into other, more threatening systems,” Paal writes.

Taiwan, which appears to be most immediately in China’s crosshairs, is not taking any chances. Next year, its military will begin building 10 stealth warships armed with guided missiles, to prepare for the threat from the Chinese carrier, Defense News reports.

"The defense ministry has been closely monitoring the construction of [the aircraft carrier], so of course we are abreast of all the latest developments and the carrier's potential threat to the Republic of China [on Taiwan]," said defense ministry spokesman Lo Shau-ho, according to Radio Tawian International. "We have carefully devised strategies as a response, but as they are military secrets I'm afraid I cannot give you any details."

Other Asian militaries will likely choose to bulk up their own defenses against their huge neighbor’s more mobile air power. The only other option would be to rely for defense on China’s biggest debtor: the U.S.