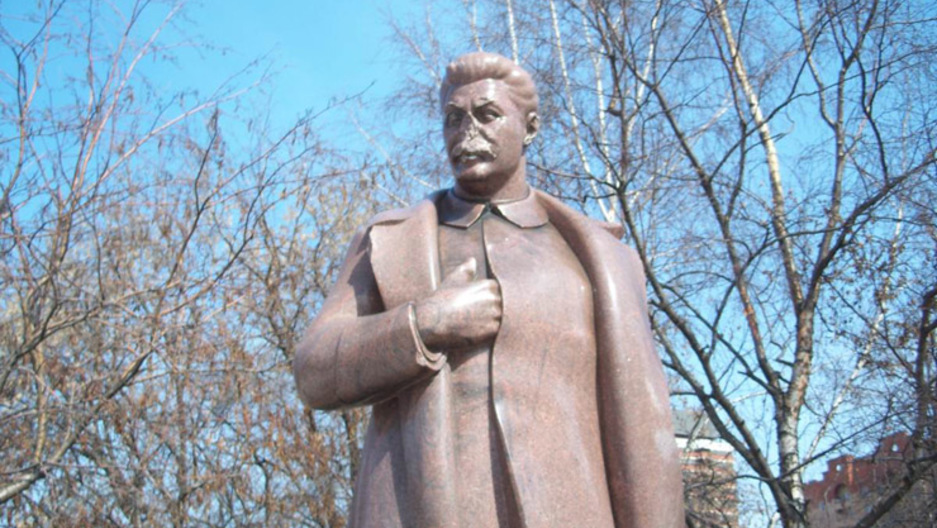 Share
By Jessica Golloher It's no secret that millions of people died under the regimes of Soviet Leaders Vladimir Lenin and Joseph Stalin. But any visitor wandering through Moscow's so-called Fallen Monument Park would be hard pressed to find any information about their crimes against the Russian people. First time visitor to the park Elena, who didn't want to give her last name, looked confused when asked whether she thinks it is strange that there are no explanations about these former Soviet leaders' horrific actions. She said Stalin's contribution during Soviet times was quite considerable. Most of the monuments were built during his reign. "Now they are just here as a testament that such state officials existed," she said. "We can't just forget that!" Dmitry Maksimovich has been a curator for 30 years. He has recently been appointed to oversee the park. He said Elena's comments are very typical of the Russian people and, quite frankly, it is not the park's job to — as he put it — "get political." "The approach to the park is entirely historical, for the simple reason that the responsibility of any museum is to collect, store, protect and display. There is no politics, and there can't be. There is only Russia's history, good or bad, however varied, it is history, and it has to be respected," he said. "The signals which are being sent to people are rather mixed," said Tanya Lokshina, deputy director of Human Rights Watch in Moscow. Lokshina said the curator's comments were a sad indication that Russia has never dealt with its brutal past under communist regimes. "To start with, it was actually possible to have a proper de-communization process in the early 90s with the fall of the Soviet Union, but the politicians were very cautious and they didn't want to antagonize the public. They knew there were still supporters of Stalin and especially some supporters of the just fallen regime, especially among the retirees and the former politicians; so they never did," she said. Prime Minister Vladimir Putin, for example, has never taken back statements he made that the fall of the Soviet Union was a tragedy and that the destruction of the totalitarian state was a big mistake. And lots of people seem to agree. Russians recently voted Stalin the third most popular person in Russia's history. Another poll by the Levada Center showed that nearly half of all Russians believe Stalin played a positive role in Russian history through his policies and his actions. Back at the statue park, curator Maksimovich continued to point out various sculptures of people such as Felix Dzerzhinksy, the first director of the Bolshevik Secret Police and Vyacheslav Molotov, creator of the so-called Molotov cocktail and foreign minister under Stalin. Suddenly he stopped in front of a very large sculpture by Evgenyi Chubarov. "There you see stone heads, which represent victims of the repressions! So why do we need posters with words such as "killer"? Everyone who needs to know, knows this," Maksimovich said. And if they don't? "They can look online or read a book; a park is not responsible for telling a fully developed story!" Maksimovich said. And park frequenter Julia, who'd preferred to not use her last name, was just fine with the way things are. "It's good! It's our history; you can't get rid of it! They were our leaders, despite the fact that they were murderers or dictators; they were still people of great stature," she said. Lokshina said the cavalier attitude coupled with the government's influence over information, is one of the reasons why Russians aren't ready to learn from their past. "I think this all speaks of confusion. You have fallen statues, one of Lenin in the garden and then just in less than half a mile you've got a huge monument of Lenin towering over the square. How would anyone feel?" she asked. Fallen Monument Park, by the ways isn't just about former Soviet leaders. There are hundreds of statues in a wide variety of styles- and not all of the pieces are in disrepair.