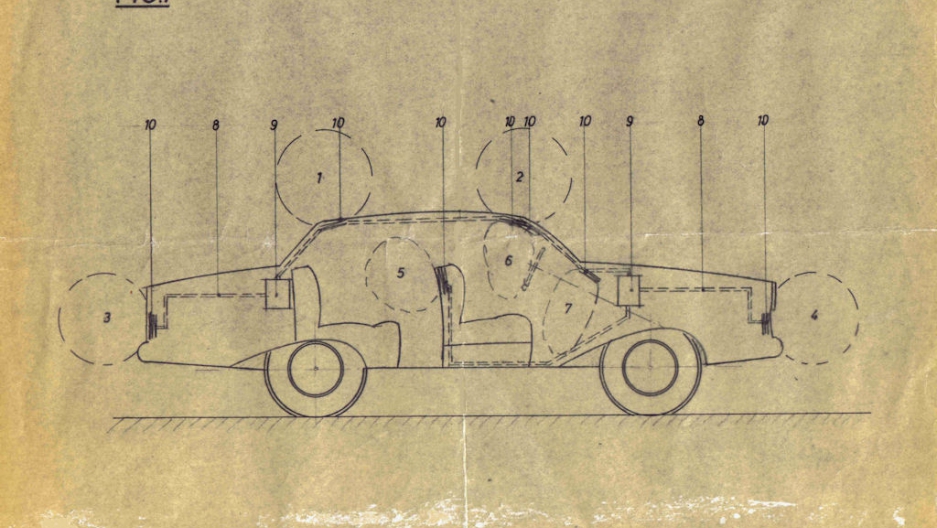 Peter Florjancic thought of car air bags as a solution for Dutch people who drove into canals and drowned. In tests he was not able to keep the air bags from exploding.
Credit: Courtesy of Peter Florjancic
Share

BLED, Slovenia — “Gold lies on the streets and you just need to dig it up with ideas. Ideas are like the shovel,” said Peter Florjancic, an inventor who has managed to earn and spend several small fortunes in his 92 years.

In addition to a fertile imagination, Flojancic says, success as an innovator requires having the self confidence to find backers for ideas that might seem idiotic at first glance.

Important too, for him, has been being at the right place at the right time. Sometimes this has been tricky. In spring 1943 he was a handsome 24-year-old Olympic ski jumper born to a well-to-do hotel family in German-occupied Bled, Slovenia. He had heard that he would be called up to fight on the Russian front, where the Germans had been crushed at Stalingrad that winter.

That was not the right place to be, Florjancic decided, so he and a friend concocted a plan flee. On April 17, 1943, they boarded a train to Kitzbuehel in neighboring Austria, equipped as if for a skiing holiday. Instead of staying in Austria they crossed the mountain border to neutral Switzerland with only what they could carry, leaving the impression they had died in an avalanche. The plan worked, but no one could know without endangering their lives.

Not long after arriving at an internment center in Bern, Switzerland, Florjancic patented a loom that could be operated with just an arm or a leg. The Swiss military saw a market for the device in war-torn Europe, full of invalid soldiers, and unofficially bought the patent from Florjancic, netting him 100,000 Swiss francs. “It was enough to buy three luxury houses,” he said.

But houses were not his thing. "I was always interested in famous people," he said. So he used much of his newfound wealth living the high life in the exclusive Swiss resort of Davos and in Zurich, where he met his wife, Verena.

Florjancic's upscale odyssey entered a new phase after the war when lhamy Hussein Pasha, an associate of King Farouk of Egypt, offered to buy his daughter during a holiday in Monte Carlo in 1950. Florjancic turned down the initial offer, but secured a business partnership.

During his following 13 years in Monte Carlo, Florjancic came up with the perfume atomiser spray and worked on a plastic zipper design. The spray was a success, adopted by perfume labels including Elizabeth Arden. The zipper was not.

"We washed it, and everything was perfect," he said. "Then we ironed the jacket, but we couldn't get the zipper open any more because it had melted. The champagne we had ready to celebrate, we drank in sorrow, not in success."

The allure of Monte Carlo, where he had met countless stars and statesmen, had melted too.

"There were tunnels, railway stations. Everything was a building site," he said. Disenchanted he headed for Villach, Austria. There he would invent plastic ice skates, whose lightness revolutionized skating, and a plastic frame for photographic slides. He also sold a component incorporated into injection moulding machines to engineering giants Mannesmann and Babcock. The money flowed.

There are some inventions among Florjancic's 230 patents which were less successful than others. Few have used the drinking straw holder or the folding swizzle stick. And not many couples have danced the night away while joined by a "dancing belt" or put on a shoe guard before driving home to prevent their heels getting scuffed.

Another near miss, like the zipper, were car air bags which Florjancic never quite managed to stop exploding. Later inventors, with better materials, made the zipper and air bags take off.

In the 55 eventful years before Florjancic returned to live in his hometown in newly independent Slovenia, his talent for being at the right place at the right time must have faded. “I told my mother that I would come back to Bled to die," he said." I thought that was going to be back in 2000.”

He's putting the unexpected years to use, working with a half dozen associates on a system for cleaning dentures, an underwater multi-gym and a bed with a built-in step machine. “Only when you work do you have a clear head,” he said. It seems to be working.

Florjancic's return to idyllic Bled "is no holiday," his personal assistant said, as the inventor strode briskly by on his way to a lunchtime meeting.