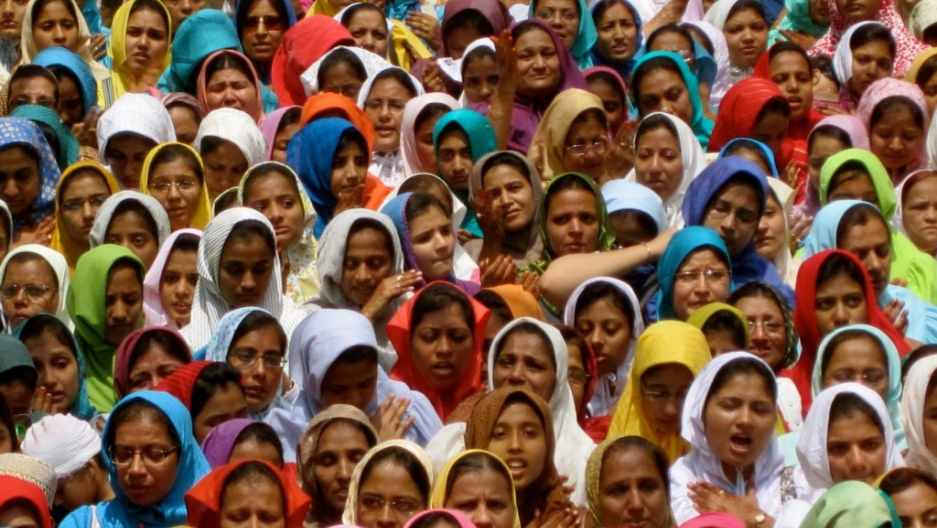 Dawoodi Bohras at the Saifee Mosque in Mumbai's Bhendi Bazaar on March 25, 2011, to celebrate the 100th birthday of their leader.
Credit: Hanna Ingber Win
Share

MUMBAI, India — Covered from head to toe, the women stood separate from the men and in many ways acted out traditions common to all Muslims.

They prayed in Arabic and beat their chests. Thousands of Dawoodi Bohra Muslim women cried as their leader, Syedna Mohammed Burhanuddin, spoke on the occasion of his 100th birthday at the Saifee Mosque in Mumbai's Bhendi Bazaar.

But rather than wearing black burqas, like other religious Muslim women in India, these Bohra women wore hot pink.

Some say that’s no coincidence.

The traditional costume, called a rida, worn by Dawoodi Bohra women represents one of many ways this community of about 1.2 million people differentiates itself from other Muslims in India, say sociologists and historians.

India’s 161 million Muslims tend to be a marginalized minority with lower education and income levels than the country’s Hindus and Christians. There is also long-standing prejudice against Muslims by those who perceive the community as violent, poor, socially backward and sexist. This can cause discrimination against Muslims in everything from housing to jobs.

The Bohras want none of that.

"You never associate the Bohras with the rest of the Muslim population,” said Zameer Basrai, a Bohra architect. “And the Bohras have worked hard to keep it that way."

The Bohras have projected an identity that is educated, prosperous, philanthropic and non-threatening. This has enabled them to escape much of the anti-Muslim discrimination here, according to members of the community.

“We’re generally considered the OK ones, the progressive ones,” said Karishma Attari, a young Bohra woman who lives in Bandra, a northern suburb of Mumbai.

Attari, wearing skinny jeans and a striped tank top, said she has rarely experienced discrimination and thinks this is partly because Hindus and Christians do not view her as a typical Muslim. She said she dresses modern and secular when in public and wears a rida when she goes to the mosque.

In addition to the women wearing ridas that cover their hair and bodies but not their faces, the Bohra men wear a three-piece white outfit and white cap called a topi with gold embroidery that easily identifies them.

Others say Bohras are not trying to distance themselves from other Muslims.

“We have had our own identity since centuries,” said Qureish Raghib, a media associate for the clergy’s office. “This is not something new.”

Dawoodi Bohras are Shia Muslims of the Ismaili Mustaaliam sect who believe that their 21st imam went into seclusion in Yemen in the 12th century and appointed a deputy, called a dai-e-mutlaq, to lead the community. After facing opposition from Sunni Muslims, the 24th dai moved to Gujarat in northwestern India.

The Dawoodi Bohras are followers of the 27th dai or high priest and can be found in about 40 countries around the world, according to Raghib.

In a country where religious tensions have led to deadly riots time and again, establishing an identity that is separate from the mainstream Muslim community may be an effort to ensure the community’s security in the future.

“They have a tendency to strike a different identity in order to make it clear to non-Muslims, particularly Hindus, that they are somehow different from the other Muslims and therefore they should not be targeted,” said Yoginder Sikand, a sociologist and writer.

After communal riots in Gujarat killed about 1,000 Muslims in 2002, the state’s chief minister, Narendra Modi, was widely accused of abetting the violence.

However, the Bohra’s current high priest, Syedna Mohammed Burhanuddin, made amends with Modi after the riots. While other Muslim communities have condemned their leaders for reaching out to Modi, many Bohras welcomed the Syedna’s move as an effort to ensure their future safety and prosperity.

Others say the Bohras have developed an apolitical reputation for the sake of business. The Bohras, like many Gujarati communities, have traditionally been traders and grown accustomed to brushing aside political differences in the name of commerce.

Bohras speak with pride of their tight-knit community. Everyone eats together sitting on the floor around one large circular plate called a thal. A newcomer can join the group without even asking, Attari, the young Bohra woman, explains.

“[The Syedna] keeps everyone united because everyone believes he is the spiritual father and listens to him,” said Attari’s mother, Yasmin Hussein, sitting on the floor of her living room. A photograph of the Syedna with his long white beard rested on her bookshelf.

Bohras freely interact with non-Bohras in public, but the community has strict rules to keep outsiders separate from their private, religious world. For example, anyone who does not possess a community-issued Bohra identity card is not allowed to enter their mosques.

“If in your family, would you want someone to come and live with you?” Hussein said. She paused and added: “No.”

There are many orthodox elements of the Bohras' brand of Islam, as well. Bohras pray multiple times a day; prayers for specific occasions include the beating of one’s chest called matam; the men must wear beards and caps at all times; and their rituals include the slaughtering of goats.

Some say that the Bohras' orthodoxy says more about the group's true identity than the progressive air it tries to cultivate.

A movement of Bohras accuses the Syedna and his clergy of acting like totalitarian kings. Reformists argue that the priests control the community so tightly that members need their permission for a range of activities like opening businesses and starting charitable trusts.

“You can’t literally breathe without their permission. There is total control over not just religious matters but also secular matters,” said scholar and leading reformist, Asghar Ali Engineer. He sat in his office filled with books in English, Arabic and Urdu, including more than 50 written by him.

“Even to marry, I need [the Syedna’s] permission. To be buried,” he said with a laugh, “I need his permission.”

In addition to coercion, the reformists accuse the Syedna and priests of corruption and non-transparent taxation.

If a member of the Bohras publically questions the Syedna, does not follow the strict rules or shows sympathy for the reformists, the high priest excommunicates him or her. Once someone is excommunicated, his marriage is dissolved and he can no longer enter Bohra mosques or associate with the community.

When Engineer was excommunicated in the 1970s, his mother had to move out of his house to maintain ties with the group.

The reformists follow the same beliefs and practices as the other Bohras. They believe in the position of a dai, but they argue that the current dai abuses his powers. The reformist women rarely wear the rida, and the men wear a slightly different cap that is completely white.

“You can’t wear a fully white [cap],” said a Bohra woman who asked not be identified, “because then you’re classified as the reformist.”

Mainstream Bohras argue that if people have a problem with the Syedna and his rules, they can leave the community.

For now, most Bohras have decided to stay within the fold.