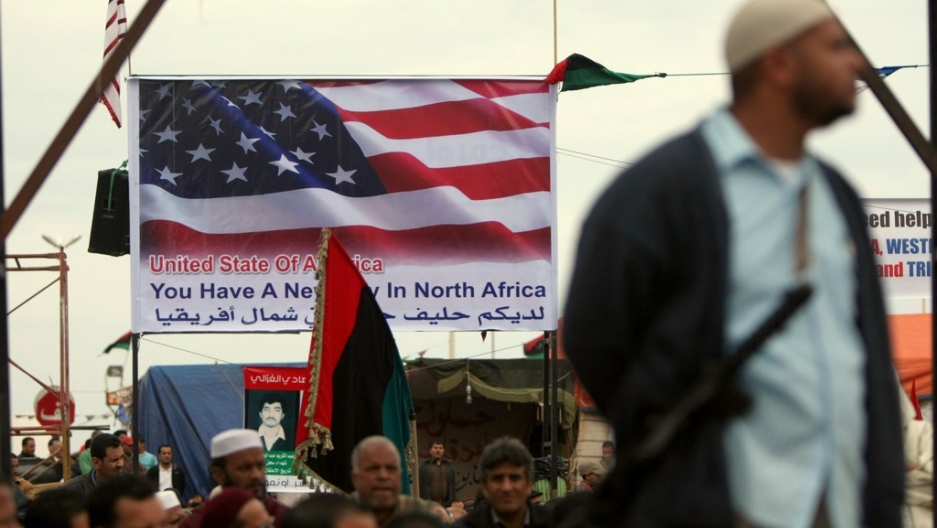 A banner bearing a United States flag with the slogan "USA, you have a new ally in North Africa" is displayed as Libyans gather for the weekly Muslim Friday prayers in the rebel stronghold of Benghazi on April 22, 2011. Libyan insurgents bogged down in their bid to oust Muammar Gaddafi hailed a U.S. decision to deploy armed drones over Libya.
Credit: Marwan Naamani
Share

NOTRE DAME, Indiana — It is now more than a month since military strikes began against the Gaddafi regime, but the colonel shows no sign of heading for the exits.

Presidents Barack Obama and Nicolas Sarkozy and Prime Minister David Cameron have vowed to keep up the military pressure until Gaddafi goes, but they have no evident strategy for removing him from office. Air strikes may have saved civilian lives by preventing massacres, but on their own they are not capable of bringing about regime change.

The United States and its allies need a more effective strategy. Rather than relying solely on military force, we should combine military pressure with diplomacy to reach a negotiated solution that begins the process of forming a new government.

It should be obvious by now, two months into the uprising, that rebel forces of the Benghazi–based National Transitional Council cannot defeat the loyalist troops. Battles have seesawed back and forth along the desert highway for weeks with no decisive advantage to either side. The rebels cannot overthrow Gaddafi, and Gaddafi cannot crush the rebels as long as they have NATO air support. The news that the United States will use its drones is unlikely to tip the balance.

The battle between rebels and loyalists has reached an impasse. There is a term for this, military stalemate. This is precisely when diplomacy is most needed.

The longer the battle goes on the greater the costs. The rebels might eventually gain enough military strength to defeat Gaddafi’s forces, but that is by no means certain and could come at a heavy price. Gaddafi has vowed to fight to the bitter end and likely will bring down many with him.

A safer and more strategic course would be to pursue diplomatic options. The "no talks until Gaddafi goes" mantra is understandable coming from the Transitional Council, but the United States and its allies should know better. Diplomacy is the way in which states reap the benefits of applying pressure. It is time to begin that process now in Libya.

Yes, negotiations will be long and difficult. Gaddafi is a butcher and a madman who cannot be trusted. His sons may be no better. But diplomatic strategies are available and should be tried.

Two of Gaddafi’s sons announced recently that their father would be willing to step down in favor of a negotiated transition to constitutional democracy. Most observers dismissed the offer, but it may provide an opening that could be exploited.

The immediate goal of diplomacy should be a cease-fire and an end to the shelling of Misurata and other cities. An offer to suspend NATO-led air operations could provide powerful leverage. The offer must be conditioned on Gaddafi accepting a monitored cease-fire and entering U.N.-supervised talks on constitutional reform, linked to guarantees of non-retaliation and protection of civilians. The offer could include deployment of a U.N.-authorized international observation force, drawn from Muslim countries, which would monitor the cease-fire and report to the Security Council on the safety of civilians.

How to sweeten the deal? The United States could offer to release a portion of Libya’s $30 billion in frozen assets. The U.N. Security Council could offer a partial suspension of multilateral sanctions. All such incentives would be conditioned on concrete and verifiable concessions from the Gaddafi regime.

We should work with the African Union in developing the diplomatic options. The AU is in the best position to talk with Gaddafi and has already met with the regime and the Transitional Council to seek a negotiated solution. Rather than rejecting such efforts, we should cooperate with AU leaders in bringing an end to the fighting and seeking a negotiated transition.

The Benghazi Council wants the Gaddafi regime gone before negotiations begin, but their bargaining position is weak. They are completely dependent on continued NATO air support. The United States and its allies should use this leverage to bring the Transitional Council into the bargaining process.

The United States was successful in building an international military coalition to protect Libyan civilians. Now we must lead an equally vigorous diplomatic effort to stop the killing and forge an inclusive political process in which all Libyans can participate in forming a new democracy.

David Cortright is the Director of Policy Studies at the Kroc Institute for International Peace Studies at University of Notre Dame. www.davidcortright.net