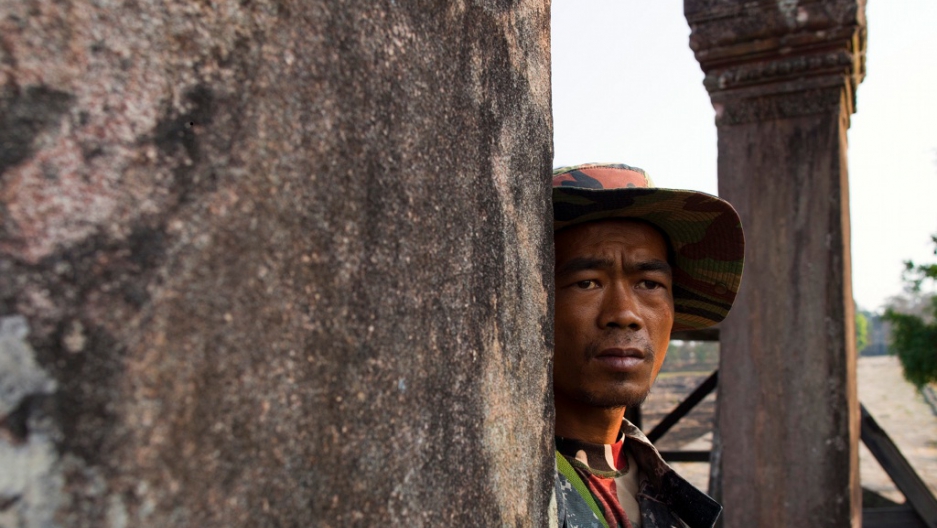 A Cambodian solider looks across at the Thai border from the ancient Preah Vihear temple. The 11th century Hindu temple, a UNESCO World Heritage Site, has been the subject of a lengthy dispute between the two countries.
Credit: Paula Bronstein
Share

At least 10 soldiers have died over the last two days in what has now become a tragic and familiar pattern of fighting between Thailand and Cambodia over their disputed border.

Gunfire broke out Friday on a jungle hilltop near the Ta Moan and Ta Krabey temples (as they are called in Cambodia), which both sides claim as their own.

This round of clashes is the bloodiest since February, when another 10 soldiers were killed near Preah Vihear, an ancient Hindu temple near the border that has been a source of contention since colonial times.

In February, the United Nations called for a permanent cease-fire between the Southeast Asian neighbors, which more or less held until Friday.

Both sides blame the other for breaching the fragile peace, and that matter — like the border dispute in general — is unlikely to ever be officially settled.

The seeds of conflict can be found in the early 1900s when the French, then in control of Cambodia, drew up a border to keep Preah Vihear on their side. To the dismay of most Thais, a 1962 World Court said the ruins were Cambodian and the U.N. declared the temple a World Heritage site in 2008 belonging to Cambodia.

Troops from both sides ringed the site soon thereafter and sporadic gunfire has erupted ever since.

When there is not active fighting, troops from either side stare at one another in stony silence. Diplomacy has so far failed.

The fighting over Preah Vihear and its environs breaks out cyclically, each time — so far — ebbing after it flows.

Watch this video from August 2010 about the ongoing standoff: