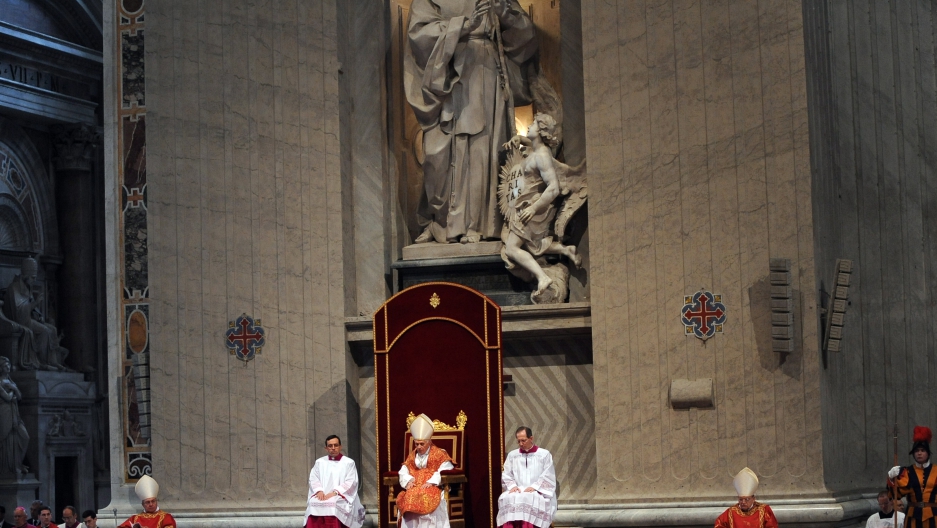 Pope Benedict XVI (C) celebrates the Lord's Passion on Good Friday on April 22, 2011 at Saint Peter's Basilica at The Vatican. Benedict celebrates the Passion of the Lord in the afternoon before presiding over the stations of the Cross, re-enacting Jesus Christ's final hours and crucifixion, later in the evening at Rome's Colosseum.
Credit: Tiziana Fabi
Share

Pope Benedict XVI on Good Friday became the first pontiff to take part in a televised Q&A session, reportedly offering his thoughts on euthanasia and the tsunami in Japan.

The pre-recorded program was broadcast Good Friday, one of the holiest days in the Christian calendar, by the Italian state-run channel RAI Uno.

The program, called "In His Image," was broadcast at around the time Christ is traditionally believed to have died.

Seven questions were chosen from thousands submitted for the pope to answer during the 80-minute program, according to the BBC.

TV viewers saw a split screen, with the pope at his Apostolic Palace residence, dressed in white and seated behind a desk in the Vatican library, answering questions from a child in Japan, a Muslim woman in Ivory Coast and a mother caring for a son in a permanent coma, among others, Reuters reported.

Benedict, 84, has allowed rare televised interviews, but his direct contact with the general public marked a new step for the leader of the world's 1.2 billion Catholics, Reuters wrote.

He reportedly told the mother of an Italian man who has been in a vegetative coma since Easter Sunday 2009 that her son's soul was still in his body and that he could feel the presence of love.

"The situation, perhaps, is like that of a guitar whose strings have been broken and therefore can no longer play," the pope told Maria Teresa, according to DPA.

Benedict, who frequently reminds the faithful that according to Catholic teachings euthanasia is wrong, then told her that spending hours a day by her son's side was an act of faith in God and of "respect for human life, even in the saddest of situations."

A Japanese girl named Elena, 7, told the pontiff of her fear as the March 11 earthquake shook her family's home and the sorrow she felt for the many children of her age who were killed, among 28,000, by the tsunami.

"I want to know: why do I have to be so afraid? Why do children have to be so sad? I'm asking the pope, who speaks with God, to explain it to me," she asked, DPA reported.

Benedict said he too had the same questions: "Why is it this way? Why do you have to suffer so much while others live in ease?"

He told her that, using the example of Jesus, suffering was not in vain. "We do not have the answers but we know that Jesus suffered as you do," he said.

To the Muslim woman in Ivory Coast, emerging from a conflict in which at least 1,500 people died, the pope said people should look to Christ as an example of peace, Reuters reported.

"Violence never comes from God, never helps bring anything good, but is a destructive means and not the path to escape difficulties," he said.