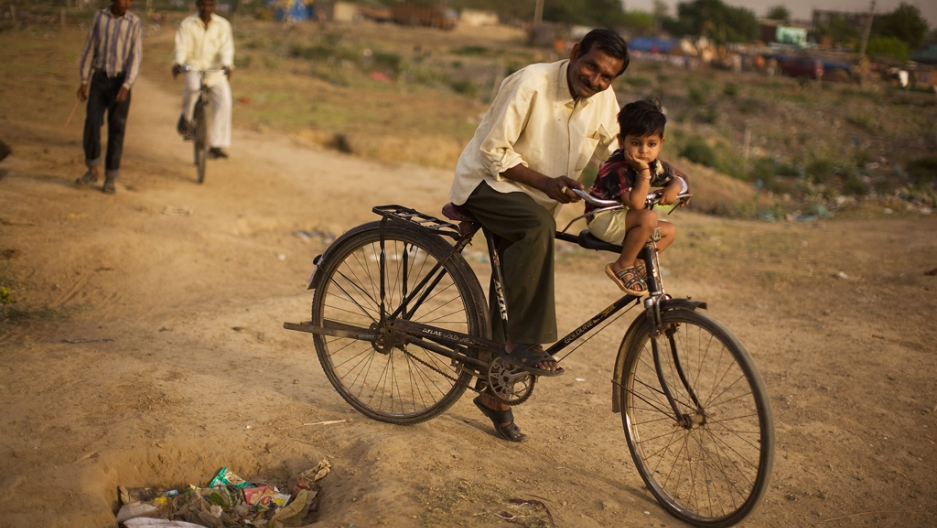 A father with his son in a shanty village in Faridabad, India.
Credit: Daniel Berehulak
Share

NEW DELHI, India — Not long ago, some of India's most influential economic planners sat down with a group of Dalits — India's erstwhile untouchables — to get, of all things, some business advice.

Though brutally oppressed for thousands of years, Dalits have benefited from education and job quotas in recent years. Some have struck out on their own to become entrepreneurs — and successful ones at that.

"To be honest, the Planning Commission was stunned to find out the scope and size of our businesses," said Milind Kamble, a 43-year-old construction business owner who heads the Dalit Indian Chamber of Commerce and Industry.

"We told them we are also contributing to GDP also and generating employment also."

India's Dalit castes were once forced to perform jobs that the Hindu religion deems polluting — like sweeping floors, making shoes and cleaning toilets.

And even though India outlawed untouchability in 1950 and established quotas in government, higher education and public sector jobs, Dalits still suffer from social and economic discrimination, according to a recent book by economist Sukhadeo Thorat. Dalits are still twice as likely to be wage laborers than Indians from other castes, for instance, and they are still routinely denied access to tea shops, water pumps and barber shops.

However, since the economic liberalization of 1991 — when India dismantled the planned economy system of quotas for manufacturing — a growing number of the Dalits have — without connections or capital — had varying degrees of business success.

"Including mine, most of the big Dalit-owned businesses are 15 years old," said Kamble. "With the emergence of globalization and the disappearance of the License-Permit Raj, many opportunities appeared and many of us jumped on them. Multinationals started rushing in, and business expanded in a big way."

The 30 Dalit business owners who met with the Planning Commission — which formulates the five-year plans that map out for the government how best to spend its resources — are just the tip of the iceberg, the Dalit chamber of commerce claims.

According to a spokesman, the Maharashtra-based organization has more than 1,500 members. Kamble estimates that there are 10 times that number of Dalit entrepreneurs across India. Combined, their companies generate about $4.5 billion in revenue and employ more than 50,000 people. And apart from gaining access to education through mandatory "reservations," they built their businesses without government help.

"The Planning Commission was stunned when they asked how many of us used government schemes to build their businesses," said Kamble. "Only one entrepreneur from Mumbai raised his hand and described how he'd applied for $20,000, spent three years visiting government offices to chase his money and finally got $15,000."

For the government advisory body, that was more inspiring than depressing — considering the increasing clamor for the expansion of welfare programs, escalating demands for establishing education and job quotas for more and more groups, and calls to extend the job quota system to the private sector as well as government jobs.

"The Dalits reframed the topic from give me the grants and reservations ..." said Boston Consulting Group's India chairman Arun Maira, a member of the Planning Commission since 2009. "Any time someone starts to make suggestions from a very practical exposition of their own situation ... that's a very interesting conversation to have."

Local press reports suggest that the Planning Commission is now considering measures such as launching executive training programs for Dalit business owners at the prestigious Indian Institutes of Management, raising the limit on loans offered to Dalit businesses through the main government program for encouraging industries run by economically weaker sections of society and making Dalit entrepreneurs eligible for special lending rates from key state banks.

But according to Surinder Jodhka, a professor at Jawaharlal Nehru University who recently conducted a study of first-generation Dalit entrepreneurs, the Planning Commission is trying to present a picture that looks rosier than the reality warrants — precisely because of the renewed calls for state intervention that threaten efforts to liberalize the economy further through labor reforms and other measures.

"There are of course [Dalits] who are doing very well," Jodhka said. "But the absolute numbers in proportion to the Dalit population is statistically insignificant. To see it as a trend or something which is going to become a routine thing is an overstatement."

Meanwhile, the obstacles preventing most Dalits from pulling themselves up by their own bootstraps go way beyond discrimination.

Most Dalits have almost no assets, so startup loans are nearly impossible to get — even when the government announces a special scheme. As new entrants, they lack the familial and social connections on which most small-scale businesses depend — a problem that can be exacerbated by prejudice. And in a country where trade has always been connected to caste, many find it difficult to master the intangible "style" of the marketplace. They simply don't fit in.

Take the case of 68-year-old Ratibhai Makwana, who heads an Ahmedabad-based plastics conglomerate called Gujarat Pickers. With more than $20 million in annual revenue, Makwana's company has been growing more than 10 percent per year for the past three years. But it wasn't easy getting started.

When his father tried to break into leather manufacturing — a natural extension of a traditional "polluting" occupation — in 1962, banks refused to grant him a loan. When they expanded into textiles, their association with leather-making meant that they had to deal with high-caste middlemen rather than sell directly to the mills. And once they were granted a distributorship, their high-caste rivals organized a boycott.

"This all happened because I was a Dalit," Makwana said.

Rajender Gaikwad, the 49-year-old head of GT Pest Control, tells a similar story. Once a sprayer himself, today he employs 400 people in four Indian states, has already opened for business in Singapore and plans to enter Malaysia and Thailand soon. But he faced plenty of obstacles along the way.

"I had no money. I used to take money from money lenders even on high interest rate of sometimes 20, 25 percent," Gaikwad said. "And back when my business was still small, a lot of the checks people used to give me would bounce. People were not giving me my hard-earned money."

Those stories don't surprise Jawaharlal Nehru University's Jodhka. Surveying prosperous regions in Punjab, he found that lack of access to loans or capital forced most Dalit entrepreneurs into businesses like running a small grocery shop or an agency for a cooking gas distributor. Fewer than 2 percent operated more capital-intensive enterprises such as hotels or factories.

"People need jobs. People need secure employment," said Jodhka. "Entrepreneurship is fine ... but it's tough. Whatever has happened over the last 70 to 80 years has been due to state policies — the new Dalit middle class, Dalit politics, etc. If you ask them, they all give credit to reservations."

However committed they are to self-reliance, Kamble, Makwana and Gaikwad agree. All three of them argued that India's system of job and education quotas must be continued for 10 to 25 years to complete the uplift of the oppressed castes.

All three also suggested that the government could redefine the conventional wisdom about quotas to include not just jobs and seats in universities, but also business loans, tax breaks and advantages in the tender process for government contracts.

"This is only the beginning," said Gaikwad. "Businessmen are coming forward, but they need support from the government. If the government supports entrepreneurs, then there will be lot more people like me."