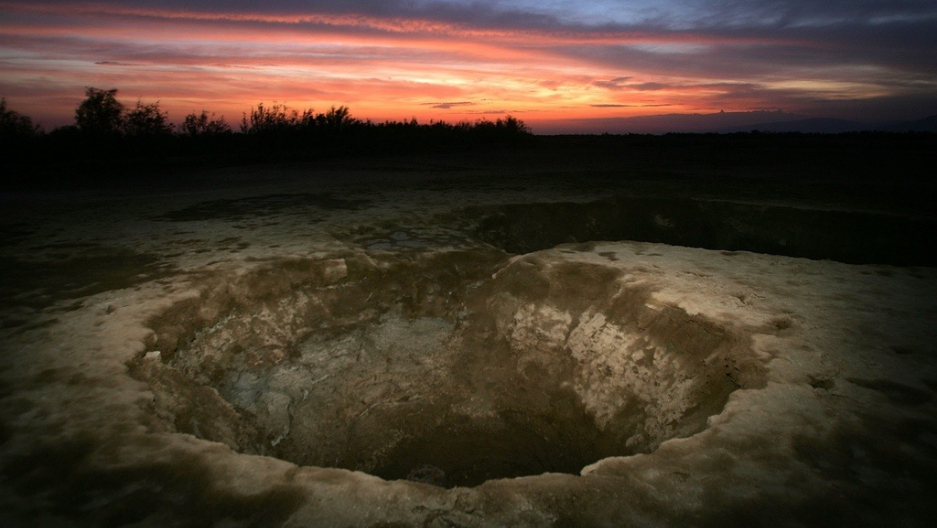 PUNTARENAS, Costa Rica — It's a big step on scientists' dream journey to the center of the earth.

A team of 30 researchers is on an expedition to extract rocks from the deepest point ever reached beneath the ocean floor.

The team hopes to drill over 6,200 feet (1.2 miles) down a hole some 560 miles off the Pacific coast of this Central American country.

Scientists said their discoveries would be a treasure trove for understanding earth's evolution, earthquakes, carbon absorption by oceans and other largely unexplained phenomena.

Drilling to the lower crust could provide clues for better predicting the ocean's capacity to trap greenhouse gases such as carbon dioxide, which remains a hotly debated aspect of climate change analysis, researchers said.

“Whenever you see a specialist talking about the carbon global cycle, this contribution (of the lower crust) is virtually unknown ... . As soon as we have samples we can pinpoint this,” said co-chief scientist Benoit Ildefonse of Montpellier University in France.

Beyond climate issues, the team has its sights set on earth science fundamentals such as how the planet layers formed, what they are made of and how they evolve over time.

These findings could help improve our understanding of the origins of oceanic plates. Those plates often barge into one another, at times with devastating results like Japan’s recent earthquake and tsunami.

The mission would come a step closer to touching matter from Earth’s mantle, the slow-moving rocky layer that makes up the bulk of the planet. The mantle is sandwiched between the core and crust we walk on.

The expedition’s co-chiefs put retrieving pristine mantle on par with bringing back the first samples from the moon in the Apollo mission.

The science ship — named the JOIDES Resolution, or “the JR” — is like a 460-foot science village where expedition teams spend up to two months engulfed in research. The JR has seven floors of labs in which researchers analyze core samples extracted from the sea floor. A drilling device towers 193 feet over the ocean like the village’s church steeple.

The drilling is done 24 hours a day with pipes built from throwaways cut from U.S. army tank barrels. When the pipes pull up samples, the ship’s driller shouts “Core on deck!” That’s when this village of scientists gets busy, scouring over sample by sample to string together a story told by sediment from the sea.

After the on-board analysis, the samples go to repositories on shore for even more thorough analysis to “complete the history book,” as one researcher put it. These collections are in the U.S., Germany and Japan and already house more than 200 miles of samples from expeditions dating back to 1968, according to the Integrated Ocean Drilling Program, an organization dedicated to deep-sea drilling for scientific research.

This is the team’s fourth visit to the hole off Costa Rica. The first was in 2002, followed by two trips in 2005 — each time digging deeper into crust that is 15 million years old. The site was chosen for the land’s thinness and the relatively fast rate at which it expanded over time. Hence the quest’s name, like something out of a “Science Fiction Theatre” episode: the Superfast Spreading Rate Crust 4.

(The ocean's crust is 200 million years old. It should be noted that to these scientists that is “very, very young.”)

In their last expedition, scientists extracted rocks from the upper crust at nearly 5,000-foot (0.94 miles) depth. The mantle at the site is an estimated 3.4 miles beneath the ocean floor; this new mission falls a bit more than two miles short.

By reaching the lower crust, the team hopes to retrieve samples of course grain rocks called gabbros. Studying these would answer questions about how magma from the mantle enters the crust, cools and crystallizes. This would be a treasure trove, the researchers said, for understanding the precise chemical makeup of the planet’s layers, how they interact with each other and with the ocean and atmosphere.

“Quite fundamental things about the way our planet has evolved are based on assertions rather than measurements of our planet,” co-chief scientist Damon Teagle of the National Oceanography Centre at Britain’s University of Southampton said at a press conference on Friday before setting off Sunday onto the open Pacific.

Samples of mantle do exist, collected from volcanoes, mountains and the ocean floor, but these were altered while traveling to the surface. The researchers want to get as close to the unaltered material as possible.

The mantle quest is at least a century old, but scientists took their first earnest crack at it only a half century ago.

In 1961, within weeks of the Soviet Union’s launch of the first man into space, the U.S. National Science Foundation sponsored a lesser-known mission in the opposite direction: an ocean drilling mission to the mantle.

The idea for “Project Mohole” was hatched by an American scientists’ drinking club, as the legend goes, several years before. The expedition set off Guadalupe Island in the Easter Pacific Ocean and managed to dig up sediment little more than a tenth of a mile (559 feet) below the sea floor.

Fast-forward 50 years, researchers can drill over a mile down but still yearn to touch mantle.

Boring into the continents is less practical for scientists than drilling in younger, narrower ocean floors. But land drilling, of course, is done as well, whether for research or oil exploration. Russia in 1970 began drilling the Kola Superdeep Borehole on its Kola Peninsula and reached 40,230 feet in 1989. Last January, Exxon announced it drilled 40,502 feet beneath Sakhalin Island, also in Russia.

A deep-sea mantle mission is out of the JR’s depth but scientists are eyeing one of the world’s only other scientific drilling ships, Japan’s 688-foot "Chikyu," for the trip when the time comes.

That could still be at least 10 years away in terms of the time and technology needed for the endeavor. But in Earth years, a decade goes by in no time.