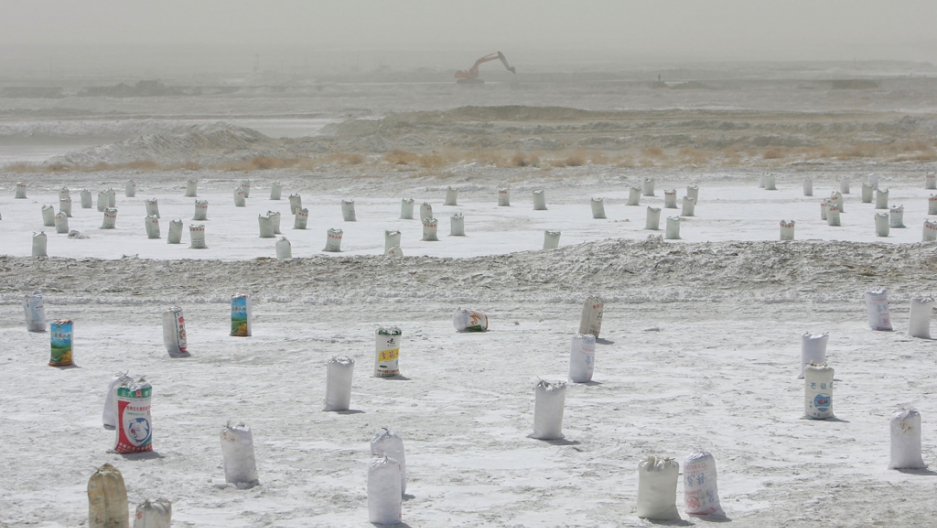 Bags of salt lie on the ground prior to being transported, primarily for domestic use in China, in Bayinwusu Township of Hangjin Banner, Inner Mongolia Autonomous Region, northern China.
Credit: Stringer
Share

BANGKOK, Thailand — In America, it’s the Appalachian hilltops. In China, it’s Jixian village, once deemed too backward for army recruitment or even marriage to outsiders.

In Australia, it’s the remote island of Tasmania, the butt of a million hillbilly jokes. What do all three areas have in common? They were, historically, abundant with cretins.

“People used to make jokes, cruel jokes, about people from the hills,” said endocrinologist Cres Eastman, an Australian and vice-chairman of the International Council for the Control of Iodine Deficiency Disorders, or ICCIDD.

“But a lot of the so-called stupidity, which they thought was genetic, was clearly not so,” he said. “It was environmental.”

A cretin, medically speaking, is a person born mentally handicapped and often physically deformed from an undernourished thyroid gland.

A cretin is born deprived of iodine, an element commonly absorbed through milk, seafood and crops grown in iodine-rich soil. By lacing table salt with small amounts of iodine, cretinism has been virtually eradicated in the industrialized world.

In recent decades, a push by the United Nations and the World Health Organization has brought most of the developing world along too. Roughly 70 percent of the world now eats iodized salt, the biggest preventer of cretinism, compared to just 20 percent in 1990.

But while cretins have become rarer, too little iodine in a fetus or young child’s system still causes a more subtle problem: diminished IQs.

The problem, Jurin said, was low consumption of iodine.

Figures included in the ICCIDD report suggest the IQs of Thai children actually dropped between 1997 and 2002. In Thailand’s mostly urban central region, for example, the average child’s IQ dropped from 92 to just under 89 points during that span.

The culprit, Eastman said, is iodine deficiency in a less blatant guise.

In decades past, iodine-deprived regions were marked by mentally disabled people with deformities. Goiters ballooned from their necks, brought on by swollen, malnourished thyroid glands.

Touring art galleries in Tasmania, Eastman said, will reveal paintings of “all the grand ladies of the 1800s who had their portraits done ... and it’s amazing that most have goiters.”

But simply adding iodine to edible salt — often at a cost of roughly 10 cents per person per year, according to the U.N. — can virtually eliminates cretinism and lift IQs. The World Bank has called iodine supplements the most cost-effective health intervention on the planet.

A joint effort to iodize the world’s salt, led by the World Bank and the United Nations Children’s Fund, has largely ended iodine deficiency in many countries. According to their research, a lack of iodine can cost a developing child’s IQ between 10 and 15 points.

Still, 38 million babies in the developing world — more than the population of Canada — are born each year with “lifelong brain damage” because of a lack of iodine, according to the U.N.

Some appear perfectly healthy. “The loss of IQ is much more subtle than having a big goiter on your neck,” Eastman said.

The setback in Thailand and other parts of Asia is weak government regulation, said France Begin, Asia-Pacific regional nutrition adviser with the U.N. Children’s Fund.

Though Thailand’s most popular brands of table salt are iodized, a number of regional producers don’t iodize. “There’s also fish sauce, which a lot of people rely on in their diet for this salty taste,” Begin said. “Countries like Cambodia, Vietnam and China, they don’t consume as much white table salt.”

The fish sauce phenomenon helps explain why even well-off Thais are iodine deficient. Only 68 percent of the wealthiest segments of society are “adequately iodized,” said the ICCIDD report, compared to just 23 percent of the poorest.

But iodizing fish sauce, Begin said, is just as easy as iodizing salt. “It’s a no brainer,” she said.

The U.N., however, avoids the touchy territory of conducting country-by-country IQ tests. Iodine deficiency is instead tracked by testing urine.

“We don’t promote IQ tests. If other researchers want to do it, that’s fine,” Begin said. “It’s a fact: there’s a clear link between iodine deficiency and IQs being lower. Countries recognize that and don’t see the need to necessarily measure IQs.”

Many Western cultures have skirted large-scale cretinism through drinking milk, which is often provides ample iodine. (The word “cretin,” originally French, is derived from a nutrient-poor region in the Alps that suffered from heavy cretinism.) The Japanese are believed to have evaded widespread cretinism because of their iodine-rich seafood diet.

But Eastman stops short of indulging in broader theories that would link the greatness of various civilizations — or lack thereof — to iodine consumption.

“I could go on and on relating theories, anecdotal situations where you can explain the lack of intellectual ability to iodine deficiency,” Eastman said. “I’m not certain you could explain the reverse by saying ‘Because the Japanese had more iodine, they’re a more powerful or intelligent society.’ Perhaps that’s true, but I don’t know.”

Though Thailand’s government has explicitly linked its IQ backslide to iodine deficiency, Eastman concedes it’s only a “likely cause,” Eastman said. “It’s hard to prove or disprove it.”

Nor should Thailand’s low scores offer schadenfreude to its neighbors. Across Asia, Begin said, “you have other regions that also aren’t served by salt iodization. If you measured the IQ there, I wouldn’t be surprised if it was lower than Thailand.”

IQ tests, typically calibrated to local languages and cultural standards, are extremely resource and labor intensive, Eastman said. “That sort of work has not been done in countries like Laos or Cambodia or even the Philippines.”

Despite the dearth of data, two researchers attempted a controversial account of global intelligence in 2002 titled “IQ and the Wealth of Nations.”

The two authors, based in Finland and Ireland, concluded that a nation’s IQ helps predict its overall wealth and development. However, the study is accused by various experts of cultural bias, bogus assumptions and dismissing the role of national education systems.

Eastman, who is preparing his own book on iodine deficiency and IQ, said he isn’t interested in presenting “some international scorecard.”

“I prefer to think in terms of human rights,” he said. “I think a person has the right to enough iodine so their brain can develop and they can be educated. That, to me, is the most basic human right.”