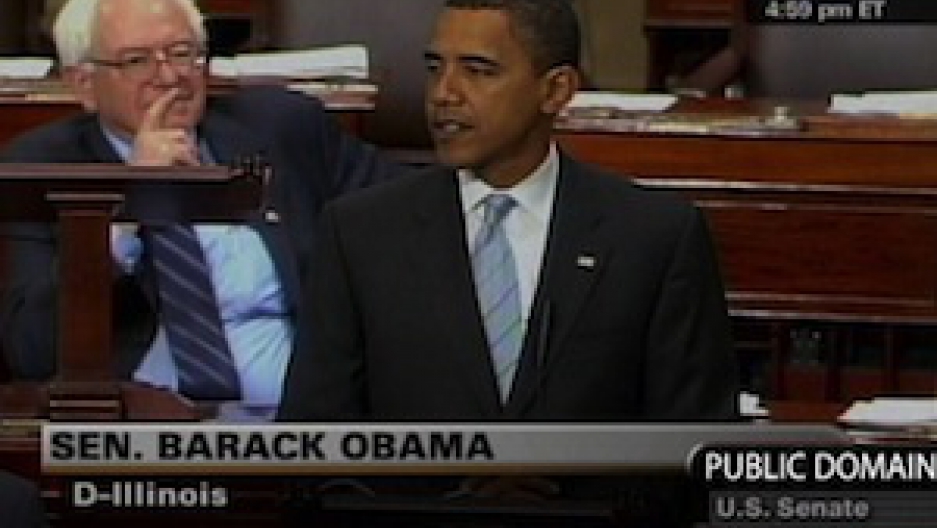 Photo of Barack Obama on the Senate floor.

The atmosphere in Congress has gotten nasty. According to a new study by Harvard Professor Gary King, Congress spends more than a quarter of its time taunting each other.

For the study, King and his colleagues reviewed 64,000 press releases from all Senators in three years of the United States Senate. "We show people the press releases," King explained to Here and Now, "and we ask them what a partisan taunt is." Once they define the taunts, the study used a computer program to "amplify that human intelligence and provide the other examples."

In general, "partisan taunting is all about you," King says, "a negative explicit attack on the opposition party or its members."

Both sides take part in the taunting, though not all members take part in equal measure. According to King, "members who represent states or legislative districts that are relatively homogonous -- where they win by large margins -- they tend to taunt more."

"My guess is, if you're from a homogonous Republican or homogonous Democratic state, you really don't need the opposition," King continues. "Making fun of them may help you get votes that are members of your party," and the other votes don't really matter.

Voters often say they don't like partisan bickering and taunting, but the reality is a bit more complicated. "In some respects, it's by definition whatever voters want, because if voters don't like it, they can vote them out," King told Here and Now. "Our senators are professionals at getting elected and reelected, and if it wasn't helping them, they wouldn't be doing it."

At the same time, voters might not realize how much taunting is going on in Congress. "What normally would be heard by the general public is just the really big, visible 'you lie' comment. Those are rare, and you only hear a few of them," King explains. "That's one of the reason why the senators are fighting to make a more and more extreme taunt."

If voters knew how much taunting goes on, they might feel and vote differently. King says: