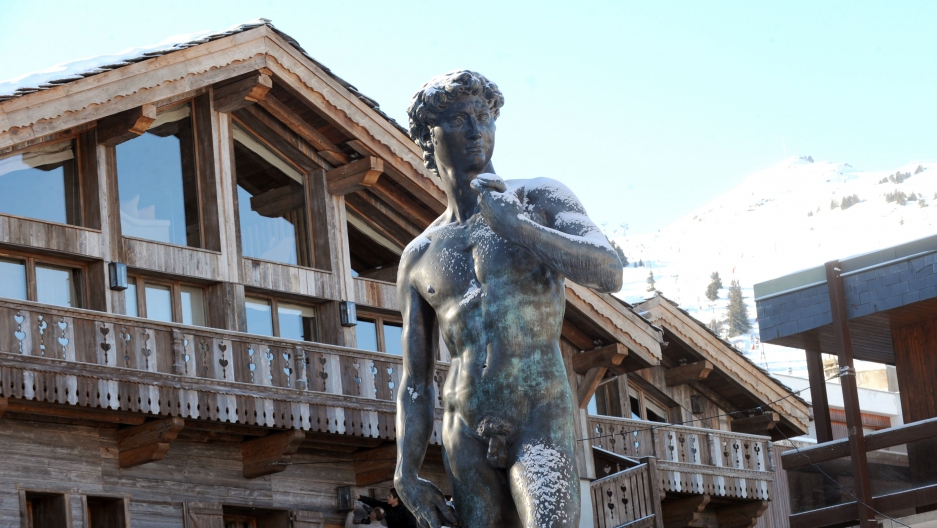 A "David" statue by Italian artist Michelangelo is displayed on Dec. 10, 2010 in the ski resort village of Courchevel in the French Alps.
Credit: Jean-Pierre Clatot
Share

Some non-surgical methods for increasing the length of the male penis do in fact work, a review of medical literature has shown.

However, several methods are likely to result only in soreness and disappointment.

And surgical procedures can be dangerous and have an "unacceptably high rate of complications," according to the study, conducted by Italian scientists Marco Ordera and Paolo Gontero at the University of Turin.

The study, published this week in the Journal of the British Association of Urological Surgeons, involving a comparison of literature on both surgical and non-surgical methods for so called "male enhancement," The Daily Mail reports.

The study comes as an increasing number of patients have sought urological advice for the so-called "short penis," the researchers said.

They note that length is normal in most men who seek help but that they "tend to overestimate normal phallic dimension," Agence France Presse reported.

A penis — measured on the dorsal, or upper, side — can be considered normal if it measures at least 1.6 inches when limp, and three inches when rigid, noted several of the studies evaluated. Allowances must be made for a man's height and his body-mass index.

Half the studies canvassed by the researchers involved surgical techniques performed on 121 men, while others discussed non-invasive methods used by 109 men.

Regarding "male enhancement," Orderda and Gonterofound that "penile extenders" that stretch a phallus with traction appeared to be the most effective.

One study of the "traction method" reported an average increase of 1.8cm while in a flaccid state. Another reported that the penis measured an extra 2.3cm on average when flaccid and 1.7cm when erect.

The method involved up to six hours of traction a day for up to six months.

Other methods the scientists investigated included a "penis pump," which vacuum-stretches the organ. Ordera and Gontero found that the use of the pump was found to be effective if used for a six month period.

"Peno-sctroal" rings, which fit around the organ, may help to augment size and maintain erections, the researchers found.

The pair said that any increase in length did not increase the thickness of the organ, but also did not cause any shrinkage, the Daily Mail reported.