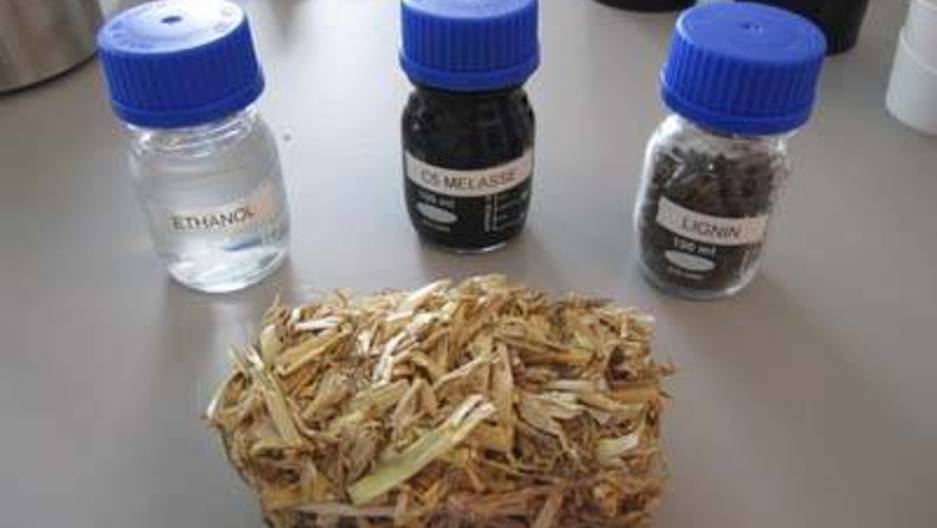 Not long ago, biofuels made from crops were being touted as a clean alternative to fossil fuels.

But that was before food prices shot up and environmentalists started taking a closer look at the impact of biofuels on land use, carbon emissions and food supplies.

Some recent analyses have cast food-based biofuels as unsustainable, and even unethical.

So researchers have been trying to create fuel from other kinds of plant matter—what are called "second-generation" biofuels.

It's been a tough nut to crack, but now a Danish company thinks it may have done it.

The process is on display at a new demonstration plant run by Inbicon, a spin-off of DONG Energy, Denmark's national energy company, in Kalundborg, about 70 miles west of Copenhagen.

On a tour of the facility, Inbicon CEO Niels Henriksen shows how the plant produces fuel from straw, instead of the food crops like corn and soybeans which are used to make traditional ethanol.

It is, potentially, a big breakthrough, and it has more to do with serendipity than anything else.
The magic of chemistry

Henriksen says that in the mid 1990s, Denmark ordered its coal-fired power plants to also burn one million tons of straw a year. The idea was to use waste from Danish farms to help reduce the country's demand for fossil fuels.

But it turned out that the straw harmed the furnaces. So, Inbicon started experimenting with ways to pre-treat it.

"Nature has over a million years developed the plants so it can protect itself from weather and nasty attacks from other micro-organisms and things like that. So that's the challenge, to break down this structure," Henriksen says.

Eventually, the company found a solution in the magic of chemistry — natural enzymes that could break down the rough fibers in the straw.

The enzymes worked so well that the company thought, why just burn the processed straw to make electricity? Why not use it to make liquid fuel?

So that's what the Kalundborg plant does.

The process starts as straw, tons of it, is soaked in water, and then cooked at temperatures close to 400 degrees Fahrenheit.

The resulting mash is fed into a large, cylindrical tank. The enzymes are added, and after about six hours, the mixture is mostly liquid.

The liquid if full of sugars which can be fermented using yeast.

The entire facility has a vaguely familiar smell to it.

"It has a very nice smell of port wine, but I don't recommend that you drink it," Henriksen jokes.

After fermentation, the liquid is distilled into ethanol that is then added to gasoline. More than 100 filling stations around Denmark are currently selling fuel that contains five percent of this second-generation ethanol.

The demonstration plant in Kalundborg can process four tons of straw per hour.

Henrisken says a commercial plant would be ten times this size, and could be built just about anywhere.

"We have started commercializing our technology, so we are starting to make partnerships and selling licenses worldwide. And ethanol is a fuel that to some extent can be produced locally, and produced worldwide."
"It's not a particularly good fuel"

The European Union wants ten percent of its transport energy to come from renewable sources by 2020. The big selling point for second-generation biofuels is that they can help meet goals like this without using food crops.

Inbicon is hoping its new plant will show that the technology is viable, but not everyone is convinced.

"It's going to be a challenge to really increase second generation fuel production massively by 2020," says Jan-Erik Petersen, a bio-engery expert with the European Environmental Agency in Copenhagen.

"It's very difficult technology, biologically and also in terms of transport logistics. You have a lot of volume for relative small amount of energy per unit. Logistically, it's difficult to gather all material in one plant to have an efficient process."

"To be honest, I and most other environmental scientists are puzzled as to why society is so focused on ethanol," says Bob Howarth of Cornell University. Howarth chairs an international effort to study the effects of bio-fuel production on the environment.

He says the jury is still out on second-generation bio-fuel.

"It's not a particularly good fuel, and you're stuck with the energetics of trying to distill it off, and all of the environmental costs associated with that. In many cases, we feel that you're better off using the feedstock material and directly burning it to co-generate heat and electricity."

Which, of course, is what Inbicon set out to do in the first place.

But the company thinks it can make the new ethanol technology environmentally sound, and profitable.

Inbicon is looking to increase its value by turning waste from the process into things like fuel pellets and livestock feed.

Inbicon also hopes that the same enzyme technology will also work with garbage.

On the outskirts of Copenhagen, trucks bring thousands of tons of household waste. Inside the facility, there's a small pilot plant built by another DONG Energy spin-off called REnescience.

Once again, it is enzymes that are at work here, turning most of the solid garbage into liquid.

He says the liquid could be used to fuel a bio-gas plant. But the company is also looking for ways to get ethanol from it.

"We all need to have alternatives to fossil fuels," Steffensen says.
"And in addition, our long term bet is that we're probably in for some climate changes, and we might as well get on with trying to find ways to avoid the adverse impacts of climate change."

If the process works, Steffensen says a commercial unit could process 70 to 80,000 tons of garbage a year into fuel.