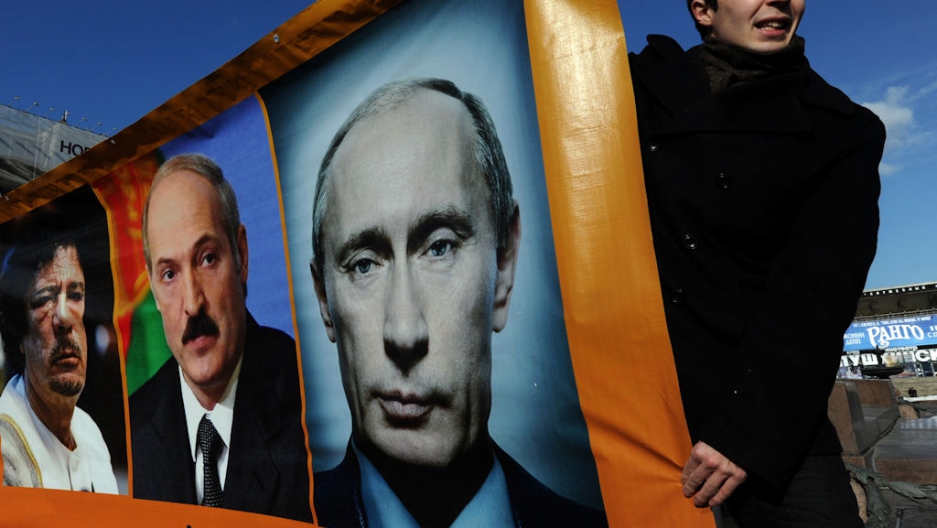 MOSCOW, Russia — About three months ago, the ruling United Russia party picked up an unfortunate moniker: “the party of crooks and thieves.” The nickname stuck.

Google the term, or some version thereof, and you get nearly 3 million hits, half as many as if you Google United Russia alone.

Coined by corruption fighter and superstar blogger Alexey Navalny during a radio interview, the phrase resonated in a country increasingly fed up with Russia’s version of “politics as usual.”

With parliamentary elections slated for December, the popular nickname couldn’t have come at a worse time for the party. It also demonstrates a trend in Russia, where it is now cool to be anti-government.

United Russia, the party created in 2001 with the sole purpose of supporting Prime Minister Vladimir Putin, used to draw Russia’s most popular celebrities. Actors, athletes and pop stars flocked to join its ranks.

“A woman came to my house for a private talk and said the party needed me,” said Anastasia Volochkova, a former Bolshoi Theater ballerina turned gaudy pop celebrity. “She said it was ‘the party of successful people.’”

That was 2003. Eight years later, Volochkova loudly quit the party, issuing an expletive-filled rant on the radio before adding a statement to her own blog, which had recently drawn attention for a few nude photos she posted as part of an "art project" from the Maldives. In the rant, she wastes no time slamming what she says is the ubiquitious corruption in the party, accusing its members of seeking to enrich themselves rather than "help the people."

Since quitting, Volochkova has had television appearances withdrawn from the airwaves and party members attribute her behavior to "a woman's mood."

"Rather than dealing with the problems of our country — the terrorist attacks, the killings — they're thinking about how to annoy Volochkova," she said, referring to herself in the third person in typically dramatic fashion.

Because Volochkova isn't your typical opposition figure. She is not an outsider or a hippy, an anarchist or a staid academic. She is immensely (if incomprehensibly) popular in Russia, a paparazzi favorite who tours the country with her over-the-top dance show. She is the Russian mainstream.

One month after Volochkova quit United Russia in early February, Russia held regional parliamentary elections. The party did less well than expected, winning most of the contests but still taking less than half of the popular vote, even though independent monitoring groups like Golos recorded widespreaded violations.

United Russia — and the country’s ruling duo of Putin and President Dmitry Medvedev — relies on a strong parliamentary majority. In the 2007 parliamentary vote, it explicitly aimed for and won a two-thirds majority, enough to change the constitution without challenge (which it promptly did, changing the presidential term limit from four to six years).

Now analysts are beginning to wonder if the party can maintain the majority as December's vote approaches. United Russia has always denied accusations of electoral fraud. Few analysts believe that to be true. But Russia’s leadership does play for a degree of legal legitimacy. Many believe that is why Putin moved from the presidency to the premiership in 2008 — to stay on would have been to join the ranks of Gaddafi, Mubarak and the world's other long-time dictators.

The Public Opinion Foundation also found that Medvedev’s popularity had swung to a record low of 47 percent, with Putin not much better, holding onto 55 percent of people’s trust. That’s understandable — the party and Russia’s leaders are inextricably linked. (Putin is head of United Russia, although he is not officially a member.)

“It’s more than that people are fed up,” said Yevgenia Chirikova, who heads a popular opposition movement to stop the destruction of a forest outside Moscow. Her cause to save the Khimki forest from what she calls a corrupt road project has become a rallying cry for Russia’s opposition. “The Communist Party wasn’t even called ‘a party of crooks and thieves.’ At least they had some achievements.”

Chirikova faulted the country’s leadership and parliament for failing to deal with Khimki. As opposition grew to the project, Medvedev stepped in to halt it, before allowing it to go forward again. Chirikova and her growing team of supporters are still fighting to stop it. On Tuesday morning, protesters led by Chirikova clashed with police during a protest at the forest as they sought to stop what they called illegal logging.

“It looks the same as in the Soviet Union, when, because of a lack of competition, the powers fail to react well,” she said. “Our question isn’t a big one and still they can’t decide it. If we had a normal parliament, peaceful decisions could be found. Instead we have this outrage.”

“People in Russia aren’t stupid. Maybe they’re not as active as they are in the West, but people understand there is no possibility to choose anyone in these elections — it’s all an artificially crafted situation,” she said.